The revealer at 58a is A LITTLE R ‘N R [Quaint vacay, and a hint to five long answers in this puzzle]. Each of those answers is a two-word phrase where each word starts with R. 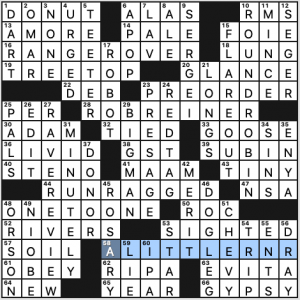 I’m not sure how in-the-language that revealer is, but it’s certainly something I’ve heard before. However, I think I’m partial to “R and R” with the spelled out “and.”

As for the entries, they’re solid enough. But there are some extraneous Rs, and with the title being what it is (a homophone of “R Two”), there really should only be two Rs per entry. With R being such a common letter, I bet other choices could’ve been found.

This is a rather unusual construction—a sort of modified pinwheel—with six total long theme entries and two pairs crossing. That probably resulted in some difficulties during construction, but on the whole the grid is fairly clean. The long non-theme entries aren’t exactly super sparkly, but they’re solid and they work. I do like SERGEI Rachmaninoff, BIG MAN, and ROSARY.

I got stuck with GST [Prime meridian standard: Abbr.], which I wanted to be GMT. If you want to balk that the S in GST is “standard” and is a dupe of the clue, I’m right there with you, but the initialism could also be Greenwich Sidereal Time which…is something similar but different. (I leave that as an exercise for the reader to discern.)

I picked some nits above, but this is solid work in what must have been a challenging grid to fill. And since it looks like this is a debut (congrats!), I’d rather focus on the positives. 3.6 stars.

Jim P here sitting in for Jenni while she’s enjoying her holiday.

Our theme is synonyms of “summit,” and appropriately, each of those synonyms is at the top of the grid with the phrases running Down. Further, each theme phrase is a 15-letter grid-spanner. 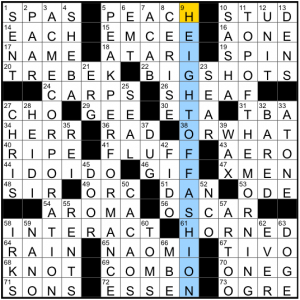 This was a lot of fun and I’m super impressed at the amount of theme material here but with nary a cruddy answer in the fill.

Likes: BIG SHOTS, everyone’s favorite game show host Alex TREBEK, an enthusiastic “I DO! I DO!,” and a defiant “OR WHAT?!” In the harder-for-Monday camp, there’s O-NEG, the needing-to-be-retired ARTOO, and MBE. 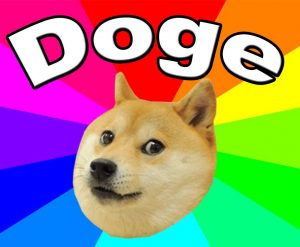 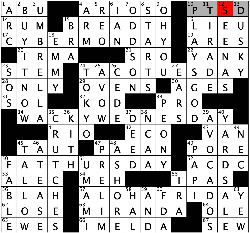 Not gonna lie, when I see this byline on Saturday in the NYT, my first thought is, “I’m in for some grid theatrics but the solve isn’t going to be terribly fun.” And indeed there’s a bit of check-out-how-much-theme-there-is in this grid — five theme entries totaling 58 letters — but the fill isn’t bad! (We’re gonna have a talk about one of those theme entries, though…)

There’s no revealer, and one isn’t needed because this theme explains itself, with each entry ending with a day of the work week: 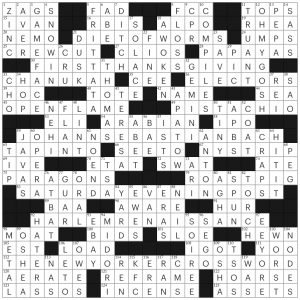 The New Yorker’s holiday year-in-review crossword bonanza is ongoing, and today we got *two* puzzles, including a 21x that will actually run in print. I’m only one human, so I’m going to write up the puzzle that will be in the magazine, since presumably more people will be solving that one, but I am willing to bet that Kameron Austin Collins’ “2020 in Movies” puzzle will also be excellent.

Ok, so this behemoth of a 21x has left-right (aka “mirror”) symmetry, which is unusual and exciting. The title of the puzzle is the revealer of the theme, although it’s not exactly hiding: the title is Century 21, and each of the theme entries is an event that happened in the year 21 of the 16th, 17th, 18th, 19th, 20th, and 21st centuries:

This is an ambitious concept, with six fairly long theme entries including one that is a grid-spanning 21 letters, but the theme doesn’t totally work for me. For one thing, only two of these entries are actual *events*. One is a person, one is an era, and two are magazine publications (??). The clues turn them into events, and provide some interesting trivia (I had no idea about the Brandenburg Concertos going to space!), but I found myself wishing the entries themselves had more in common with one another. Regardless, I am certain it was a challenge to find themers of lengths that could work with this grid design, so I’m still fully impressed. I also lol’d at the self-referential THE NEW YORKER CROSSWORD at the end, and I hope this is a hint that THE NEW YORKER CROSSWORD is planning on making history in 2021 by (a) going daily. (b) running in print in the weekly magazine, or (c) both.

The most remarkable thing about the puzzle, in my view, is the crisp and clean fill. It’s *extremely* difficult to cleanly fill a 21×21 puzzle, but nothing in this puzzle jumped out at me as Fill I Could Live Without. There are a few things that I bet Caitlin and Robyn would have preferred to avoid (YOO, REN, ALPO), but I think this may be the smoothest 21×21 I have ever solved. It was also clued to a New Yorker Friday level (lightly challenging, aka very easy), likely so New Yorker subscribers who aren’t regular solvers will find it accessible. I beat my NYT Sunday personal best by over 90 seconds, if that’s any indication of just how accessible this puzzle was! It was smooth and enjoyable and an excellent way to wrap up 2020/kick off 2021.

Overall, tons of stars from me. This puzzle is exactly what I needed for this weird in-between time of the week between Christmas and New Years. Cheers to THE NEW YORKER CROSSWORD! 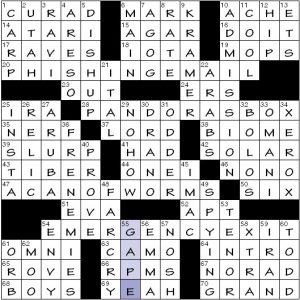 Today’s theme is rather self-evident. They all have the same clue, [Thing to open with caution]

These are all good answers, and don’t feel forced. A nice set of symmetrical themers. The only quibble I have—and it’s minor—is that the last one feels as if it would better be EMERGENCY EXIT DOOR.

The solve was super-smooth and easy. Was on autopilot the whole time. Mondays, eh? Example: instead of the vaguer [Farm sound] the clue for 62d MOO is [Dairy farm sound]. This puzzle really holds your hand.

And finally, in the interest of not being close-minded myself, I’ll make this a shut-and-open case: 55d [Stare openmouthed] GAPE.