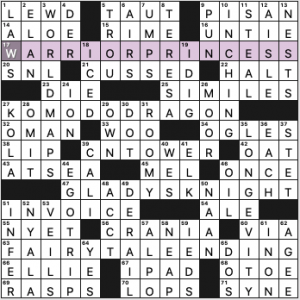 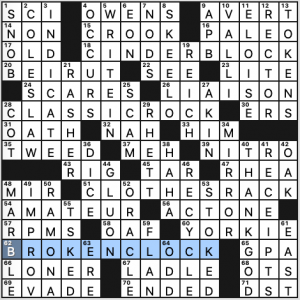 The elegant touch here is that each configuration is different, and there’s a progression as the CLOCK letters seem to “move” from right to left. There’s nothing about the theme that requires this set-up, but it’s evidence of an attention to detail on the part of the constructor that’s always nice to see. (The final configuration CLOC*K isn’t possible without actually spelling out CLOCK in the first word (e.g. “clockwork”).)

Cs aren’t ever fun to work with in a grid, and there’s an overabundance in this grid. But that doesn’t seem to have dampened the fill much. There’s plenty to like such as COLE SLAW, “THANK GOD!,” RECYCLE, YORKIE, and GLUON, plus AMATEUR, LIAISON, WRITE-IN, and a pair of kid-lit girls—symmetrically placed, even—ELOISE and RAMONA.

An impressive construction with plenty of strong fill. 3.8 stars. 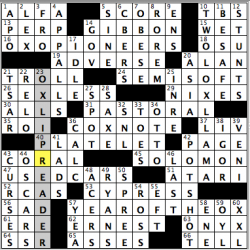 Good day, everybody! Before we go any further, let’s all congratulate Liz on her 500th Crossword Nation puzzle!! Time flies when you’re having fun, right?

As we head closer to ringing in the New Year, today’s puzzle is an homage to the Chinese New Year, which will be year 4719 when it rolls around in just a few weeks. When it comes come around, it will be the YEAR OF THE OX, and the grid contains puns in which the letters “OX” are added consecutively into phrases/names of nouns to create puns (57A: [2021 on some upcoming calendars…and a hint to this puzzle’s “strong” theme]).

There was a good number of medium-length fill in the grid, and the ones that featured going across were pretty quality, from USED CARS (47A: [Pre-owned vehicles]) to SEMI SOFT, probably my favorite type of texture since I’m in love with the Drunken Goat cheese, one that is soaked in doble pasta wine (24A: [Cheese category that includes gouda and havarti]). Then there’s the cream of that medium-fill crop in SEXLESS, which had a pretty funny twist to a now-common phrase of “friends with benefits” (26A: [Like some “friends with no benefits” relationships?]). Can’t say anything in this grid deserves a POT SHOT, except for shouting out the entry that includes just that (42A: [Cheap criticism]).

“Sports will make you smarter” moment of the day: SOLOMON (45A: [Son of David, in the Bible]) – A sad entry for the day, as we honor former Major League Baseball executive and pioneer Jimmie Lee Solomon, who passed away at the age of 64 this October. Solomon was the executive vice president for baseball development starting in 2010, and was the driving force in creating developmental academies in urban areas throughout Latin America, where a number of current MLB players were first discovered. The All-Star Futures Game, a showcase of the minor league’s best talent right before the All-Star Game the next day, was also a brainchild of Solomon’s. Solomon was tight end at Dartmouth and received his J.D. from Harvard Law School. 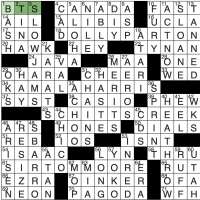 I think Matt does a retrospective puzzle or two every year; this year is no different. As a matter of fact, this year it might be a nice idea to focus back on the GOOD since it seems there wasn’t much of it!

Well done. Nice to focus on the good and not the depressing stuff for a change. And the obscure pop culture is a themer this week, but I think it is just because I don’t know anything. Another nice one, Matt! 4.3 stars.

That is all! Now to get a song stuck in your head  … 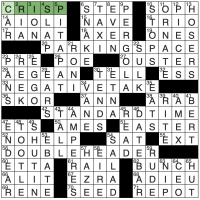 Quick one today! I have been off a few days; maybe the rest is helping! The revealer for this one is at 56A:

So we are familiar with phrases double parking, double space, double negative, you get the idea. I tried to use HEADER in this fashion at first since I am an idiot! Nice easy puzzle, and a quick 3 minute solve as well! Now off to try and finish Puzzle Boat 7 this week; only 20 puzzles or so left out of the 140+! 4.2 stars today for this Tuesday edition.

With a title like that you half expect the theme answers to be vertical right?

THEME: CASH is hidden under types of tables. 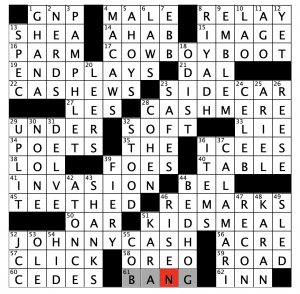 Although David is running Puzzle Society “reruns” for a week, I never solved this one. Very clever. Loved the concept and the circle-less execution. At first I thought it was a simple word repetition theme as I saw CASH a couple times before uncovering the revealer. Nice AHA and a sigh of relief that it was more complex and intriguing than that.

Always a fan of “Apt name for…” clues. In this case SIDE CAR. Also enjoy “find-the-hidden-word” clues, in this case GNP in Signpost (though I prefer when the word we’re examining has something to do with the hidden word).

The RIYDAH / DAL crossing was tough for me. No idea which vowel belonged there and ran through them before Mr. Happy Pencil made an appearance. My only other nit is… do hammers go “BANG!”?