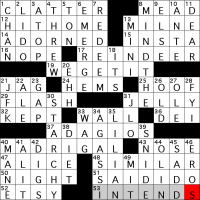 hello and welcome to episode #656 of matt gaffney’s weekly crossword contest, “Poetry in Motion”. for this week 4 puzzle which came out on christmas day, the instructions tell us that the answer is a stocking stuffer. i typically don’t actually blog the last MGWCC of the year, as i’m usually traveling at this time of year. but this year is atypical for a number of reasons, isn’t it? anyway, here i am. what’s the theme of the puzzle? as is fairly obvious from a glance at the clues (with a nudge from the title), eight across clues are written in the form of a rhyming couplet:

eight is rather a lot of theme answers for a slightly undersized (13×13) grid, but several of them are quite short. anyway, the next big aha is that these are not just any eight random words—REINDEER in particular stands out as holiday-related, which seems relevant given the instruction set. in fact, all eight of these words are line-ending words in the poem a visit from st. nicholas by clement clarke moore, a.k.a. “twas the night before christmas”. a further nudge is that the eight theme clues are written not just as rhyming couplets, but in the same meter as the poem, i.e. anapestic tetrameter.

what are we to do with this information? for each theme word, we need the corresponding rhyming word from the poem, like so:

reading off the first letters of these eight rhyming words gives MARS BARS, yet another rhyming phrase. i’ve never gotten a mars bar in my christmas stocking, but i certainly have gotten other types of chocolate bars.

this feels much easier to me than last week’s puzzle, which required a combination-of-two-ideas step i don’t know that i would have ever thought of (as there was nothing in the puzzle that suggested it, i think), and indeed there are over 400 correct answers on the leaderboard compared with about a third that many last week. so a slightly wonky difficulty-o-meter again this month, but perhaps a gentler meta to end the year was matt’s christmas present to all of us.

on its own merits, this puzzle was really outstanding. every little design choice was elegant and smoothly executed, and there was a nice succession of aha moments. in particular, the eight theme clues were each little works of art in their own right. so the meta gets a big thumbs-up from me.

speaking of great metas, if you haven’t done evan birnholz’s “5×5” puzzle from the washington post this past sunday, you simply must check it out. it’s an absolute tour de force. you can get the PDF here, or the .puz here (but at least take a look at the PDF if you’re solving the .puz), and when you’re done, you can read jim quinlan’s review of it here. it’s simply magnificent.

that’s all from me this year. thanks for all the puzzles, matt, and here’s to a great 2021!