I got the theme of this puzzle immediately. It made me smile more from nostalgia than anything else.

Everything refers to 61a. 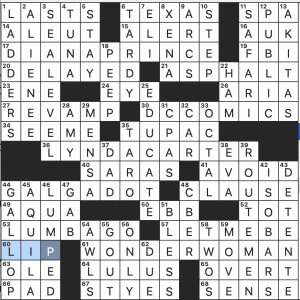 And 61a is, of course, [Co-founder of the Justice League]: WONDER WOMAN. My brother was an avid comics reader and collector when we were kids. I borrowed all the Fantastic Four and Wonder Woman comics. Ah, the good old days. I haven’t seen the current incarnation of WW movies; I hear not-so-g0od-things about the current release. I don’t mind the cross-references because the theme is accessible and the entries gettable from crossings if you don’t remember your WW facts. A good Monday theme.

The fill was also Monday-appropriate with the exception of ALIENEE, which is serious crosswordese, and 45d [Eagle constellation], AQUILA. That’s obscure for any day of the week. I had no trouble with it because I know LUMBAGO, but I suspect that’s also a bit obscure for non-medical types (or even younger medical types).

What I didn’t know before I did this puzzle: that AMY Adams played Lois Lane in “Man of Steel.” 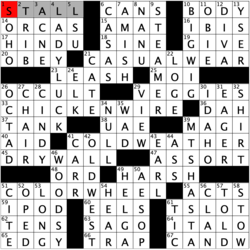 Moment of silence for the late, great Gail Grabowski, who left us on Christmas Eve. To the solver, easy puzzles are, well, easy. But to the constructor, making a good Monday puzzle is, IMO, one of the hardest things to do. You have to come up with a theme that’s fun and not too complicated, and then your choice of fill words is much more limited than for other days of the week. And still you want to keep things fresh and fun. To be as prolific as Gail was, making puzzles that were consistently easy yet fun to solve, is an extraordinary feat. She will be missed.

Gail teamed with my former constructing partner, Bruce Venzke, for this puzzle, which like so many of hers is simple but well executed. Going first to the revealer at 67A [Grand Ole Opry genre, briefly, that’s also a hint to 21-, 33-, 44-, and 51-Across], we see CANDW. That is, “C and W,” or short for “Country and Western,” the “Grand Ole Opry genre” in question. And it’s a hint to the theme answers, because each of those is a two-word phrase with initials C.W.:

One tiny nit: Can we stop cluing SOHO as an artsy area? All the artists got priced out decades ago. Now Soho is where you shop if you’re too cool for the Fifth Avenue tourist trap shopping area and possibly where you work if your employer is a tech startup.

Today we have a solid grid by two puzzle veterans, and a Monday-straight synonym theme. The revealer is TEASE at 55d [Verb for which synonyms can be found at the beginnings of the starred answers]. 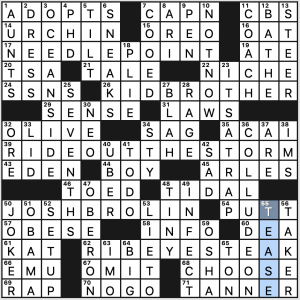 Based on the title, I was somewhat disappointed there weren’t any jokes in this puzzle. Once I finished the grid and realized there were none forthcoming and before I sought out the revealer, I thought “vein” was the keyword, and so I went looking for veined things. A RIB-EYE STEAK could be veined. JOSH BROLIN as Thanos? Sure, he was kinda veiny. I guess. Lightning in a storm, too. I have to say, I carried that idea pretty far.

Obviously that’s wrong, but I guess you can imagine a vein running through the grid consisting of the synonym words. I like that idea.

As for the theme entries themselves, they make a nice set. I especially like JOSH BROLIN and KID BROTHER. 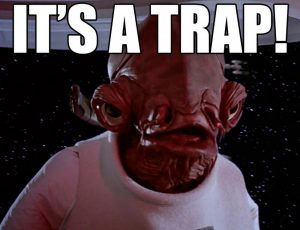 Elsewhere, OCEANSIDE sounds so pleasant and “IT’S A TRAP” is fun, but only as spoken by Admiral Ackbar (see this profile of the voice actor who passed away in 2016; I recommend the remixes).

It’s quite impressive how clean the grid is. If I had to pick a nit, it would be the awkward SSNS.

A pleasant grid. Synonym themes aren’t all that exciting in and of themselves, but this one’s as solid as they come. 3.8 stars.

Before we dive into the puzzle, let’s take a moment to contemplate those numbers. Brendan has give us 1,328 puzzles, including 602 Themeless Mondays. That’s astonishing – and generous. See that picture of Brendan on the right side of his blog? Right over a line that says “Tip yr constructor?” Go put some money in his tip jar. I’ll wait right here.

Thank you. Now on to the puzzle, which was satisfyingly chewy. I thought I was on Brendan’s wavelength at 1d, because I know Millard Fillmore was a WHIG (and this showed up in another puzzle recently. Danged if I can remember which one). That did not help, because geography is my nemesis, so I had no idea that HOBART is the capital of Tasmania. 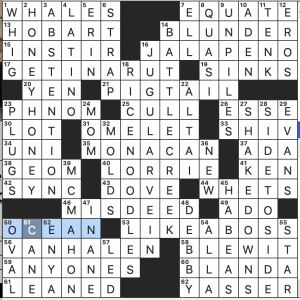 What I didn’t know before I did this puzzle: pretty much every musical reference except HONEY HONEY. I also did not know that Sojourner Truth lived in BATTLE CREEK, Michigan. Great clue – a fun fact to learn, representation of one of the great Black women in American history, and much harder than any mention of Kellogg would have been because we know Tony the Tiger better than we know Sojourner Truth. Structural racism + capitalism. 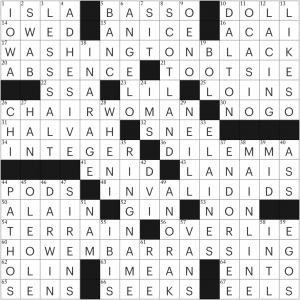 Welcome back to your regularly-scheduled New Yorker programming! We’ve got a challenging Monday puzzle from Elizabeth C. Gorski that didn’t totally work for me, Although the highlights were high, the low points (mostly fill) were pretty low.

First, the good stufF: I really enjoyed both marquee (15s). I had not heard of WASHINGTON BLACK, but it seems like a novel that The New Yorker’s audience would enjoy and I am glad to know about it now! HOW EMBARRASSING is also a lovely colloquial phrase with a perfect clue [“I’ll never live that one down!”]. Other things I loved include CHAIRWOMAN (I tried to fit CHAIRPERSON and failed) and HALVAH (yum!).

Next, the not-so-good stuff: The fill was not as smooth as we usually see from Liz Gorski, including some less than ideal prefixes (ENTO-, OENO-), some meh abbreviations (INTL, SENS), a Roman numeral (DVI), and some iffy partials (A NICE, WHEN I) , including a partial that is part of a name (REE). The E at the crossing of SNEE and NEILL was also a guess for me, although I suppose there’s not much else it could be, phonetically.

Overall, several stars for crunchy spanners and some solid cluing, but the fill brings down the rating for me. 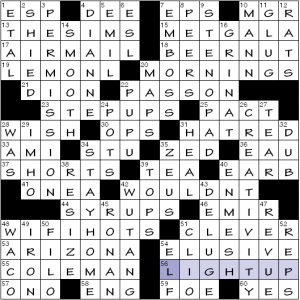 I perceived the theme mechanic right away but could neither make sense of the rationale or the puzzle’s title. Fortunately, there was an exceedingly apt revealer by the end that resolved both.

Sooo, each of those tails can precede the word “light”. Limelight, starlight, stoplight, Bud Light™, spotlight. That all works, but I kind of wish the two-word brand name had been dropped. 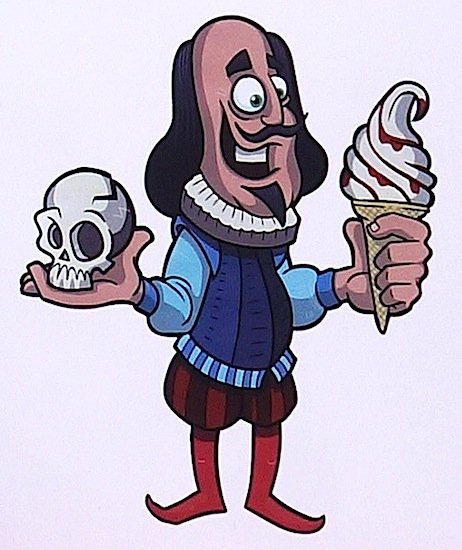