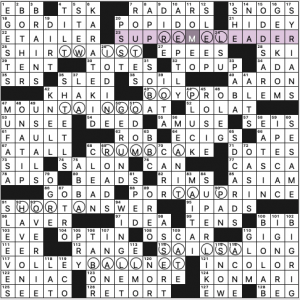 Paolo’s busting moves on the dance floor, aka the crossword grid. Nine phrases contain kinds of dance, which are spelled out in the circled letters. Each dance name is split into two chunks with a single letter “busting” the move:

The title is a little off, since dance moves are things like dips and spins, and these are primarily styles of dance rather than moves.

I just thought to myself, It sure would be elegant if the single letters that bust open the dances spelled something out. And sure enough, they do! “MAY I CUT IN?” is your sort-of-meta answer here. Nice, Paolo! That’s perfect.

With 1a and 1d giving us EBB and EGESTS, I was primed to notice any disappointing or blah fill, and there was some of that, but it didn’t jump out enough for me to remember what I didn’t care for. Fill I liked: KONMARI, GEEKDOM, GORDITA, and the new-to-me Tinder SUPER LIKE.

Nice twofer clue angle: 27a. [Pieces of pentathlon equipment], EPEES / 28a. [Piece of biathlon equipment], SKI. Biathlon remains so, so bonkers. How is this still an Olympic sport? I blame Scandinavia. And really, downhill skiing plus guns would be more fun, give off more of a James Bond/Cliffhanger vibe. Rhythmic gymnastics with sniper rifles also has potential. Or diving! You gotta get off an accurate shot while twisting in the air and still nail your pool entry.

This will be shorter than usual. I’m actually leaving my house to do something fun. We’re going to make glass beads (in a large well-ventilated room that is basically a garage with only three of us, all masked).

This puzzle was also fun! The theme answers are adages or maxims clued as if they were, well, career counseling. 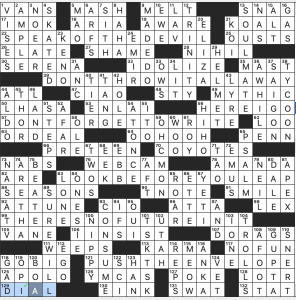 All the phrases are solidly in the language and the clues are amusing. Fun Sunday theme.

Time to gather ourselves and head out, so I’ll skip to “What I didn’t know before I did this puzzle:” that NASA TV provided coverage of the New Horizons Pluto fly-by. I didn’t know NASA TV existed, to be honest.

THEME: Movie titles are split amongst various rows of the puzzle. 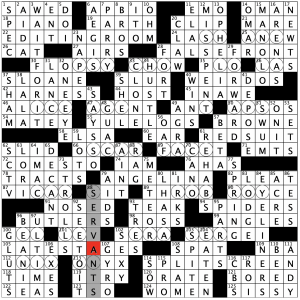 All of the title of the featured films were familiar to me, but it struck me just now as I was typing that up that I’ve actually only seen one of them: PSYCHO. Kinda stunned myself with that.

A very friendly and accessible theme today, though this sort of split-a-word-across-rows theme type often goes under-appreciated. They are tough to fill cleanly as the grid is under much more stress than it appears to be, especially here where fill crosses two rows of theme several times. The only spot where I really noticed it having a somewhat difficult time breathing was in the APSOS / RED SUIT area; I don’t like the former much as crosswordese and the latter is unfamiliar to me as a stand-alone phrase, which is why I was so hesitant to enter it since it didn’t seem like something Evan would use. Other than that, it was a very steady solve.

Caught on to the theme quickly and after finishing about 15% of the puzzle I wagered that the first letters would spell something. From the S in SHANE and the P in PSYCHO, I correctly guessed SPLIT SCREEN, which was a nice “pat myself on the back” moment.

The clue I learned the most from was 15D [Chaos ankle strap designer Blahnik] MANOLO. I had no idea what any of that meant. Looks like a popular type of strap on a pump style shoe though. Out of my price range even if I could find the correct size.

Overall, I’d say this was an ideal puzzle to start another new year of WaPo puzzling. Can’t wait to see what’s in store.

THEME: Animated Disney movies are found at the beginning of common phrases, and clued wackily. 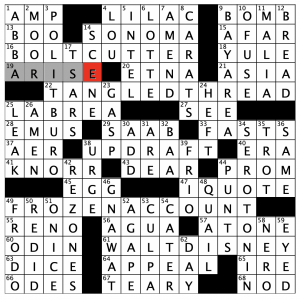 Couldn’t get out of my own way here. I really wanted some sort of box cutter for the first themer. I almost convinced myself that the answer should be BACHS CUTTER… then figured that’s a whole different theme.

The phrases TANGLED THREAD and UPDRAFT aren’t very familiar to me as stand-alones, so I wasn’t entirely confident that I had grokked the theme until I uncovered FROZEN ACCOUNT.  The revealer here doesn’t really do all that much to aid in the theme it’s benign enough, but I think I would’ve preferred another themer like the others in there. Is there one? There has to be. Hmmm…. BRAVE HEART? Does that work?

Some chuckle out loud mistakes I had were for 45A [Thing to check at a supermarket]…. I entered EGO. Check your EGO before paying for groceries. Then I had AGE, thinking maybe the customer was trying to get a senior discount underage. Nope. EGG. Which… that’s still a really weird clue for EGG. Who checks a single EGG?

Also, for 33A [Ramadan rituals] I had FA?TS and could only see FARTS. There’s a middle schooler in me somewhere that refuses to catch up to my aging body.

Theme: Tools are found hidden inside well-known names and phrases. 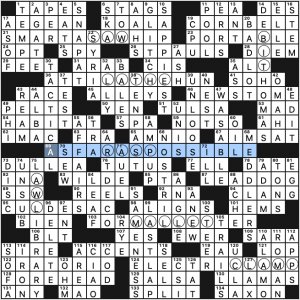 These work for the most part. However, I wish there was some other basis for tools being hidden in phrases other than “here are some tools hidden in phrases.” Obviously, the longer entries are more interesting than the three-letter ones. I especially like ATTILA THE HUN. I was hoping it would help me remember whether the correct spelling is Attila or Atilla, but sadly, the theme works even if I mis-spell it.

What’s good in the fill? “NEWS TO ME” tops the list followed by CORN BELT, ART DECO, LEAD DOG, ST. PAUL’S, NOSTRIL, CUL-DE-SAC, and GLITCHY. On the more challenging side: I would never have known Keir DULLEA [“2001: A Space Odyssey” star Keir] without getting every single crossing. But it’s nice to put the actor’s name with the role of Dave in that film.

Solid puzzle that made for a quick solve. 3.5 stars.