The theme answers today consist of a noun preceded by an adjective which is that same noun followed by -LESS. 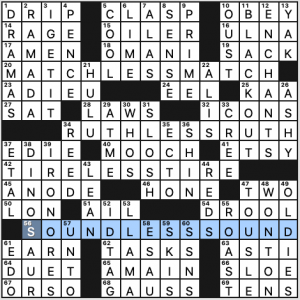 A nice theme, but it was quick to resolve. Once I got the first one, the second one was very easy, and the third took barely a moment. The last one slowed me down only because I was stuck thinking about a river or brook, despite where I live. So as easy as this theme was to sniff out, it probably should’ve gone earlier in the week.

With only 13- and 14-letter theme entries, it’s good there are only four of them. This allows the outer ones to go in the fourth and twelfth rows and allows the constructor to fill the corners more interestingly. We get the two 8-letter double-stacks as a result with BLACKOUT and DINOSAUR being the highlights.

The two middle entries are pushed close together though, and that makes that central section a bit thorny with AT ME, MOOCH, SLOSH, and ECTO. 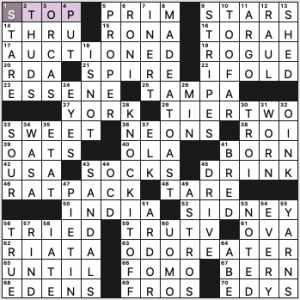 Ugh, I hate seeing “[See notepad]” notations in place of clues. I generally don’t look at the notepad message unless I can’t figure out the theme on my own. This one was easy enough and I didn’t look till afterwards. It says “In the print version of this “uniclue” crossword, the clues appear in a single list, combining Across and Down. When two answers share a number, they also share a clue.” I didn’t use the print version, but when the convention is “look here for the Across clues, look over there for the Down clues,” and I am comfortable with that convention, having a “uniclue” (terrible word) set of clues seems uninteresting. Basically, the “northwest corner” squares that start both Across and Down answers anchor “X and Y” phrases, where the X and Y words start with the same letter and the word “and” is omitted. STOP and STARE, PRIM and PROPER, STARS and STRIPES, SWEET and SOUR, BORN and BRED, SOCKS and SANDALS, DRINK and DRIVE, TRIED and TRUE—all clued straightforwardly at the Across spot in the electronic versions. It’s a nice enough theme, but I just don’t get the point of the “uniclue” stunt.

Meanwhile, in the rest of the puzzle: 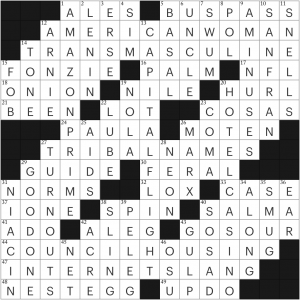 Good morning! Today’s New Yorker puzzle is a moderately challenging grid from Natan Last. It’s got a cool grid design, it’s packed with crunchy long entries, and overall it was an enjoyable solve!

For starters, let’s talk about this grid. We have four “staircase” blocks in the puzzle, two in the NW/SE corners and two in the middle, creating a unique and nifty grid shape. This design facilitates the 13/14/11/14/13 lengths of the long acrosses (AMERICAN WOMAN / TRANSMASCULINE / TRIBAL NAMES / COUNCIL HOUSING / INTERNET SLANG) and just looks friggin cool. We also get three long downs with AMAZON PRIME / CAPITAL FLIGHT / HOTEL CASINO. Of all of these long entries, I was unfamiliar with COUNCIL HOUSING and CAPITAL FLIGHT, but both were more or less inferable (particularly CAPITAL FLIGHT). I loved seeing TRANSMASCULINE in the grid and I appreciate the clue’s acknowledgement that not all trans experiences are the same (with the word “some”). INTERNET SLANG is also a great entry, today paired with the wordplay clue [In lines online?].

Overall, this was a fun, cool-looking, moderately challenging puzzle. Plenty of stars from me!

Turnabout, it would seem, is fair play. 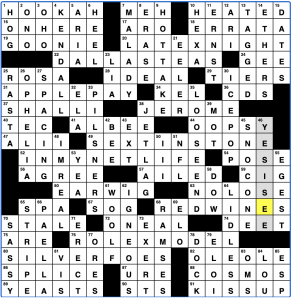 Happy New Year!  Ella Dershowitz and Aimee Lucido have the first AVCX puzzle of the year, emphasis on the X:

As suggested literally by 91A, in each pair of nearby theme clues, the X from the lower answer’s more common phrase (DALLAS TEXAS, IN MY NEXT LIFE, SILVER FOXES) has migrated to the theme clue above it (LATE NIGHT, SET IN STONE, ROLE MODEL), making things a little silly at either end.  Theme-wise, this was cute, and I particularly loved SEXT IN STONE.

38A: Lizzo song with the lyric “take your ass home and come back when you’re grown” — JEROME

Other things to like in the grid: RED WINES (Lambrusco is one of my favorites – it’s sparkling! – which made that clue easy), APPLE PAY, HOOKAH, COSMOS, SPLICE, YEASTS, PILSNERS, JET LAG, PAELLA, and IGNEOUS rocks (“Like much of the rock at Joshua Tree National Park”) 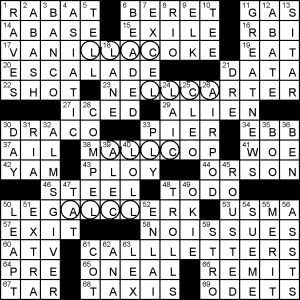 I don’t know if many people will read this blog, given everything else going on. I just hope that, when all is said and done, this means your country and the world will emerge stronger.

The puzzle? CALLLETTERS is the revealer, and there are four instances of the letters of call scrambled between two words. NELLCARTER is not someone I knew, but her career seems illustrious enough.

[“Her resume is clean and checks out”] is a weirdly specific clue for NOISSUES. I don’t really get why that specific phrase is the clue.

On the other hand, I enjoyed that [Sound meant to startle] for BOO acknowledges its usual ineffectiveness.