I’m trying to blog this while watching terrorists and thugs occupy our nation’s capitol, so my apologies for being distracted.

Each theme answer has an O in it which actually appears in the row above. 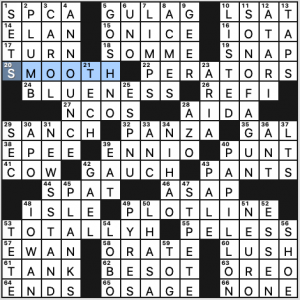 Ah, it took me a while to figure out the connection between each themer. The Os appear in the middle of the word HOP and that jibes with the puzzle title where the word “bounds” can also mean “hops.”

Highlights in the fill: “SON OF A GUN!,” NEWSSTAND, PLOTLINE, PAPILLON, and “GOSH, NO!”

There were loads of thorny and question-marked clues that made solving (especially while watching the news) thoroughly difficult. I quickly gave up trying to time my solve. 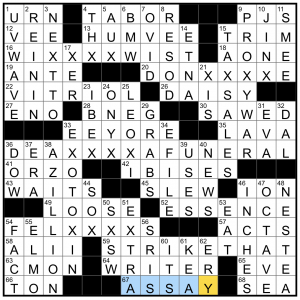 Today’s review is going to be brief since as I write this (on Wednesday), today has been a LOT, news-wise.

Matthew Stock and Sid Sivakumar have today’s puzzle, and it’s a fun one.  I caught on to its main trick early on:

Each placement of THAT in the theme entries has been replaced with an X, the symbol for a strike in bowling.  Thus, STRIKE THAT.  I’m going to leave it there this week, though I will commend the range of down fill including Xes – we’ve got some lovely options, including PROXY WAR, ONYX, EXOTOXIN, and music festival SXSW.

Starting off 2021 with a fun puzzle made by a man. Let’s see how many women show up in the lineup as the year progresses.

It took me nearly the whole nine minutes I was solving to figure out what was going on with the theme. 1d had me wondering if it had something to do with lists – [Serial comma follower] is AND. “Serial comma” is the current term for what I grew up calling the “Oxford comma.” I’m a serial comma fan but this time it’s misdirection. The actual theme answers: 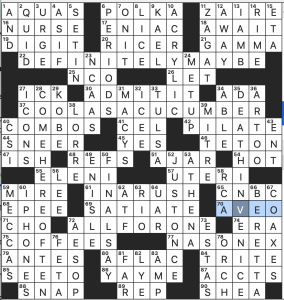 The theme is original, well-executed, and tight. The “aha!” moment was delightful. A great start to the year. I’m not sure what to make of the grid design – maybe nothing. It’s bigger than normal – 17×18. Is it supposed to be a chameleon? Probably not.

What I didn’t know before I did this puzzle: that “Accordionally Yours” won a Grammy in the POLKA category. I didn’t know there was a POLKA category. According to Wikipedia, they dropped it in 2009. I also did not know that Daniel McKeague replaced Gilbert Gottfried in the AFLAC ads. He was fired in 2009 for making Twitter jokes about the earthquake and tsunami in Japan. (Predictably, one of the stories about this is headlined “Voice of Aflac Duck Gets His Goose Cooked”.) Far as I can tell, McKeague still has the job. If you enjoy Gilbert Gottfried, please tell me why. I can’t stand him. And yeah, I know that’s basically his brand, but still.

Much to my surprise, the Grammy-winning album “Accordionally Yours” doesn’t have much of an online presence. The best I could do was this video of one of the bands featured.

Bit of a curve ball today!

THEME: Across themers have JACKS in common phrases, and the down answers that cross them only make sense if each JACK is “skipped over.” 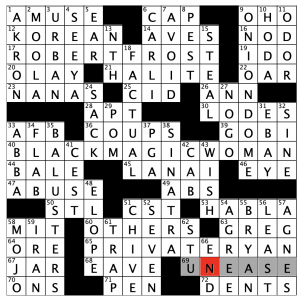 I like it when Universal plays with the idea of Thursday style puzzles! And hey- it’s Thursday to boot. Bonus.

Though the clues really nudge the solver to cracking the theme, and I personally would’ve preferred uncovering the AHA myself without so strong a push, I very much appreciate that it does that. I see this more as an introduction to the wackiness that can happen in a puzzle for casual solvers who fall in the M-W solving level.

It’s a puzzle that is title dependent too, which I forgot about until there didn’t seem to be a revealer.

My favorite bit of fill is FLAB here… because I like the idea of The FLAB Four more than The Fab Four. LE(a)ST favorite: BRYAN crossing RYAN in the theme.

Favorite Universal of the week for me! Excellent job, Paul. 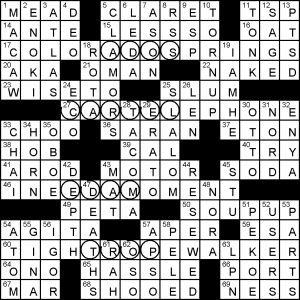 Mixed drinks is a solid, if generic theme idea. The set of drinks are MEAD, CLARET, SODA and PORT, which is quite an off-beat, inconsistent set. They also appear asymmetrically as entries in the grid, which reinforces that oddness. A more consistent set of drinks would have made this puzzle less bumpy, in my opinion.