The revealer is BODY OF WATER (58a, [Geographic feature, and a hint to four answers in this puzzle]). Each theme answer ends in a word that is also a BODY OF WATER. 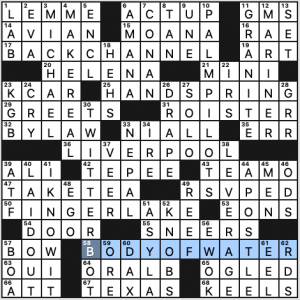 I was going to ding this puzzle because one of these entries (the last one) is an actual BODY OF WATER whereas words like “channel” and “spring” have alternate meanings. But then I realized there’s another layer to the theme, and that is that the first words are parts of the body. That elevates the theme quite a bit and minimizes the inconsistency in the last entry. I like a good double-layered theme.

Lots of long fill to look at but entries like MAKE REAL and TAKE TEA feel a little iffy. PALM PILOTS is pretty dated at the rate technology evolves, but TWITTERBOT is great. Elsewhere there’s LEVERAGE, APOSTLE, GRANITE, MARINER, LAID OUT, “I KNOW IT,” and RSVPED. On the whole, I’d say “mixed.” Not sure how I feel about ROISTER [Celebrate exuberantly]. I don’t know that I’ve ever encountered it before, but it is an interesting word. I could do without irrelevant entries like K-CAR and weird plurals like HEHS.

Clues were unusually thorny today and/or I was on the wrong wavelength. But I did note these:

I enjoyed the theme though fill seemed hit-or-miss. 3.6 stars. 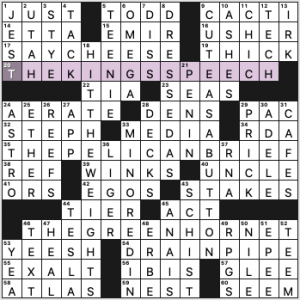 The theme works quite well, and I appreciate that there are just three themers, leaving space for fill both interesting (SAY “CHEESE,” CUTE AS A BUTTON, MINORED IN) and smooth.

There are plenty of solvers who don’t follow sports, and the theme might annoy them a bit. With a theme that hinges on knowing basketball teams, it might’ve been best to steer clear of sportsy content elsewhere in the puzzle. EPEE and STEPH really don’t lend themselves to non-sports clue possibilities, and HIT THE WEIGHTS also has an athletic vibe. 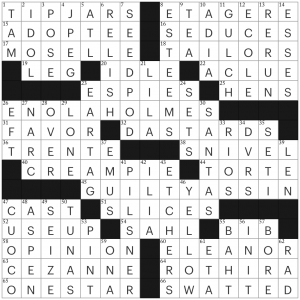 Well I’m not going to give it ONE STAR, but this isn’t my favorite New Yorker I’ve solved lately. The long entries are fun, but the middle-length and short stuff didn’t really have a spark to it. I did enjoy a lot of the clues, but they don’t entirely make up for the meh fill.

I have not yet seen ENOLA HOLMES, but it’s on my list (and if anyone cares to comment/offer an opinion on the show to convince me to watch it/not watch, I would appreciate the input! Too much content!). Regardless, it’s a fresh entry and I liked it. I also enjoyed GUILTY AS SIN, which tbh I’ve never entirely understood. Is a sin guilty? Or does it mean GUILTY AS [a person who definitely committed a] SIN? Again, regardless, it’s a good entry and I got it with basically no crosses.

The middle length entries almost had a mini-theme of “things that are French” running through them: ETAGERE / ECOLE / TRENTE / MOSELLE / CEZANNE.  Nothing against the French, but that’s a lot of French! I also didn’t care for ROTH IRA (yawn) or ETCHERS, and overall the corners were just kind of…there. I did like TIP JARS (and its clue, [Dollar stores?]), as well as DASTARDS,  CREAM PIE, and TORTE.

Anyways, that’s just, like, my OPINION, man. More than ONE STAR from me! 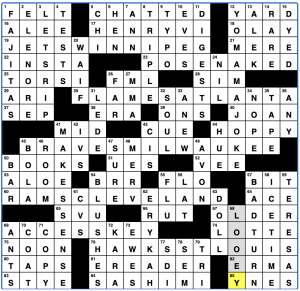 Today’s AVCX puzzle is a guest feature from our own Adesina Koiki!  I might be biased, but I liked this one a lot:

This one took me a little longer than I expected it to – I caught on right away that we had sports team names being flipped around (WINNIPEG JETS, ATLANTA FLAMES, MILWAUKEE BRAVES, CLEVELAND RAMS, and ST. LOUIS HAWKS), but my sports knowledge is rusty on a good day.  An extra level I appreciated is that not only were the two parts of each team name relocated, each of these teams was also relocated (hence the years given with each clue).  It’s all very cleverly done.

Other things to like in the grid: POSE NAKED, TORSI, BOOKS (clued as “They are bound to sell”), SASHIMI, learning Titus Andronicus contains an early YO MAMA JOKE, and ERYKAH Badu 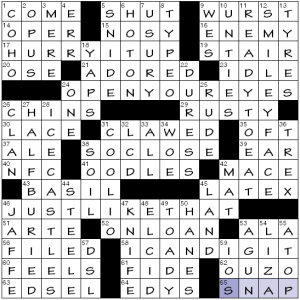 Since I didn’t skip down to that final across revealer, I was buffed around a little blindly as I encountered each themer. Surveying it now, I see that these are all quite appropriate and deftly clued. I even like the terse four-letter entry at 1-across, despite encountering that off-putting cross-reference right at the start. 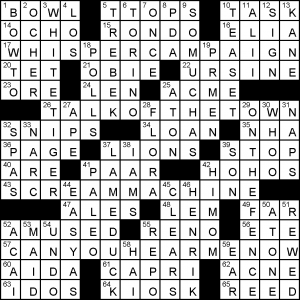 Until the revealing answer, I wasn’t that enthused by the theme. It consists of nouns meaning to talk, used roughly in the same sense in the phrases. However, the descending order of WHISPER/TALK/SCREAM, plus the revealing CANYOUHEARMENOW, are both big winners in my book.

Cute clues, which sometimes get short shrift in the LA Times: