Fun theme! I figured out what was going on with the third theme answer I ran into at 35a and that helped the solve a little bit. It would have helped more if I’d seen the larger pattern before I finished the puzzle. It seems totally obvious now.

Each theme answer repeats one note of the solfege scale repeated, and those are rebus squares in both directions. The rebus squares in the grid are marked wrong because Black Ink doesn’t accept them as correct and I forgot to take the screen shot before I checked for typos. 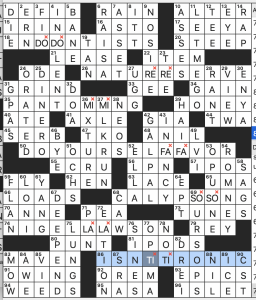 The notes march in order down the grid. This is a feat of construction that was also a lot of fun to solve. Very impressive. CALYPSO SONG landed oddly on my ear. The Google Ngram viewer confirms that CALYPSO is far more common, but then again the phrase contains the single word, so that’s not all that helpful. In any case, I am totally willing to forgive a slight clunker in the service of an awesome theme.

What I didn’t know before I did this puzzle: that Angelina Jolie played the title role in “GIA” or that Mila Kunis played her as an 11-year-old. I also did not know that UMA Thurman played Edie in “Be Cool.”

I love what I learn from crosswords. I went looking for a video, and now I know that when calypso hasn’t been sanitized for a white audience, it’s a highly political and even revolutionary genre. I also learned that steel drums were invented in the late 1800s after the British banned drums because of the subversive nature of the music. Here’s a CALYPSO SONG from King Short Shirt who is not, in fact, wearing a short shirt. The lights go on a few seconds into the video.

Theme: V sounds are inserted into the last words of well-known phrases. 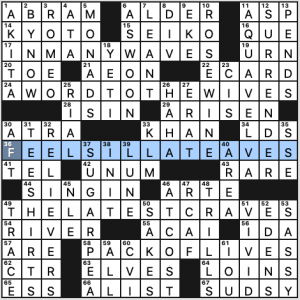 For the most part, a cute theme, despite my little nits.

Unfortunately, there were more distracting elements than usual in the fill, such as ASWOON, IS IN & IN IT, ERAT, E-CARD, AEON, RCAF, CVI, LUNE (I wanted LUNA), and NLE (which I had to look up to realize it’s short for the NL East). On the plus side, AQUA VELVA accounts nicely for two of the added Vs, and TEE SHIRTS, RELIEVERS, and SURRENDER are all solid. SUGAR PEA and ROSÉ WINE are assets as well.

I like the theme here, but the short fill was distractingly clunky. 3.3 stars. 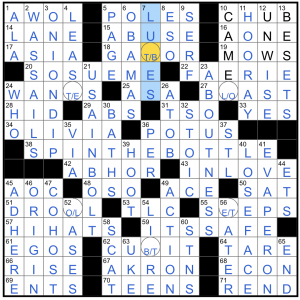 Today’s NYT needs a little bit of a roundabout explanation.  Aimee Lucido and Ella Dershowitz’ latest collab is all about SPIN THE BOTTLE (38A, “Classic party game … or a hint to solving the answers that intersect circles”).  With that in mind, there are two orientations of BOTTLE that fit in the circled squares, one that makes sense for the across clues, starting with the B at the bottom of the circle and moving clockwise:

and another, with the B starting at the top of the circle, that works with the down clues:

It’s an impressive construction, especially since each position, the crossing clues read as valid words – check out the full screenshot for details.

Elsewhere in the grid, I loved learning about the concept of ABOUTNESS (23D, “Relevance of text, in librarian’s lingo”), which, as the clue suggests, comes from Library and Information Sciences and is the concept that a text, utterance, image, or action is on or of something in particular.  I just think it’s neat. 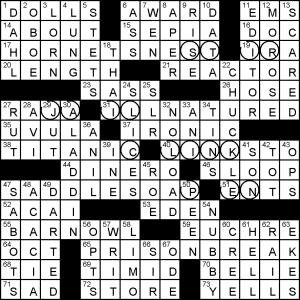 Synonyms for prison is a rich vein to mine for themes. Today features PRISONBREAKS, with answers hidden between two entries, as indicated by the circles I added: STIR, JAIL, PEN. There was no way to shoehorn HOOSEGOW into the puzzle today, alas.

There was less of the wordplay in the clues that we saw yesterday, and not too many entries to highlight. WEN is a word I don’t think I ever encountered except in a crossword. I imagine if I saw one I’d call it a cyst…

Brendan Emmett Quigley crossword (No. 1331), “I’m Not Dressed For This Weather” — Jenni’s review

I’m getting this in under the wire. The theme answers are items defined as if they were clothing. 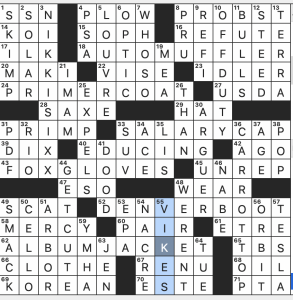 Fun! I don’t mind when the wordplay is in the clues as long as there’s wordplay somewhere.

What I didn’t know before I did this puzzle: that ESPN made a miniseries called “The Last Dance about Michael Jordan and the Chicago BULLS.