Today we get another snazzy double-themed puzzle. Each theme entry is a well-known phrase where the first word is a loose synonym of “fantastic” and the second word can mean a place to play certain sports. 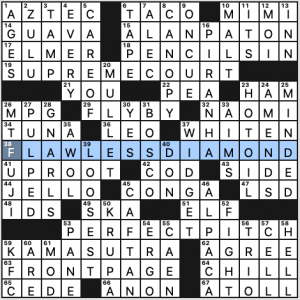 It’s unusual to have stacks of unthematic 9s going in the same direction as the themers, but that’s what’s happening here. I didn’t know the name ALAN PATON [“Cry, the Beloved Country” novelist] but I did spend a few minutes post-solve learning about his novel set in 1948 South Africa, just before the onset of apartheid. Below that is the nice PENCILS IN. In the other stack we have KAMA SUTRA (which I do know about) and FRONT PAGE. Elsewhere, PIRANHA, WIDGET, ALPACA, and MULLET are fun entries.

I also didn’t know—or didn’t remember—CAFTAN [Beachgoer’s coverup]. Wikipedia says it’s Persian in origin and is worn throughout Asia and Africa. Here is An Ode to Meryl Streep’s Golden Caftan in ‘The Post’. 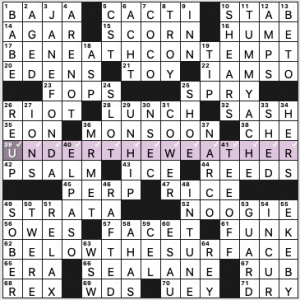 The theme is neat. Take three phrases with “under/below/beneath” in them, and put them under an apt word to make it sort of meta:

Fave fill: Lemme give you a NOOGIE, 52a. [Knuckleheaded act?]. Also liked JANE FONDA, TUMMYACHE, and FUNK with a quote clue: 61a. [“I only got a seventh-grade education, but I have a doctorate in ___”: James Brown].

Fill I wasn’t wild about: AGAR, I AM SO, CHE clued as the Italian word, WDS, UEY, ’TWERE, ARE NOT, CST, plural AHAS, NSEC, and EKE BY.

Ben Tausig’s AVCX, “Living Up To Our Own Time” — Ben’s Review 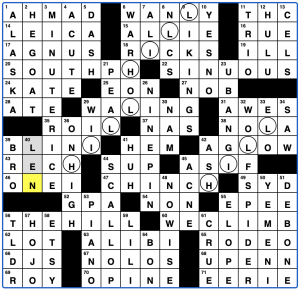 I didn’t quite get what was going on with these (though I had seen the circled HILL squares climbing up diagonally in the grid, a nice nod to the poem’s title), and then I realized these are hills you’re supposed to climb with each answer – SOUTH PH becomes the much more sensible SOUTH PHILLY by climbing the hill and taking the Y from WANLY.  Similarly, RECH becomes RECHILLING with the ING from WALING (29A, “Ribs, as on corduroy”) and CHINCH is actually CHINCHILLA with the A from NOLA (38A, “City where Solange lives, informally”)

Other things to like in the grid: both KATE and ALLIE of 80s sitcom fame, SINUOUS, learning that U PENN is “near lots of delicious Ethiopian food”, WOLF SPIDER, and thinking about SCALLOPs seared in lemon-garlic butter. 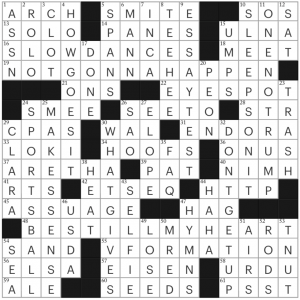 This puzzle is *packed* with bangers. The long entries are almost universally excellent and crunchy, and if some of the fill is a little iffy to make that happen, well, that’s a tradeoff I’m on board with today.

The two longest entries are the colloquials NOT GONNA HAPPEN and BE STILL MY HEART, which are both super fun. Other long stuff, and there’s a lot of it, includes: SLOW DANCES / V-FORMATION / SPORTSBALL / MAKES SENSE / SLEEPS ON IT / WHAT GIVES / ESSAY TEST / HOW GOES IT / DON’T GET UP. Wowowowow, let’s discuss. SPORTSBALL is probably my favorite — it’s just such a silly, irreverent thing that people who hate sports call sports, but in a way that (in my opinion) generally contains a bit of affection for those weirdos who enjoy sports.  I also loooove the clue/entry combo for DON’T GET UP, which gets at the way this phrase can be said both innocuously and deeply snarkily. The only long entry here I would push back on is ONE NO TRUMP. Bridge terms are generally not my favorite, and this one seems even less of a thing that stands alone than most.

Overall, the vast majority of the stars from me. See you all on Friday! 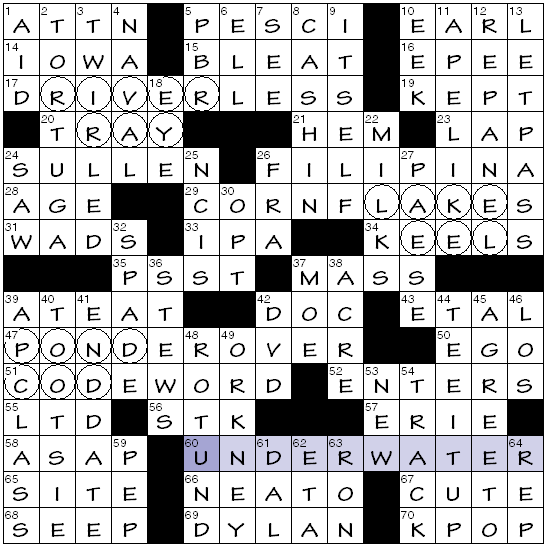 Going to tiny-ding the theme for fudging a little on the double-plural lakes/eels. The esses are there solely to get the entries long enough. Otherwise, a nice mid-week theme. 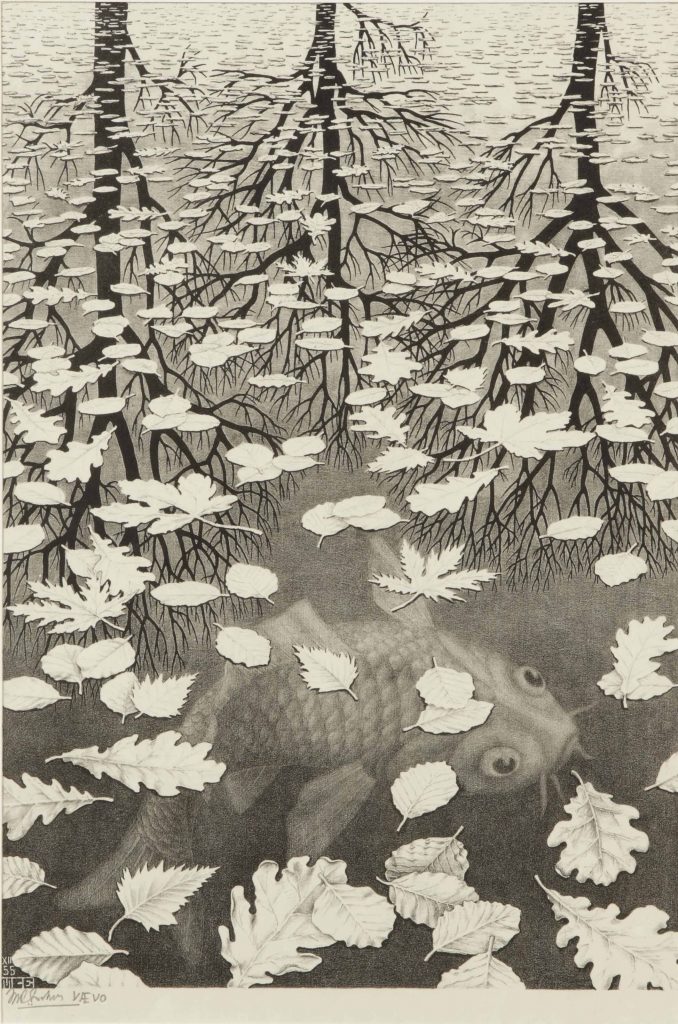 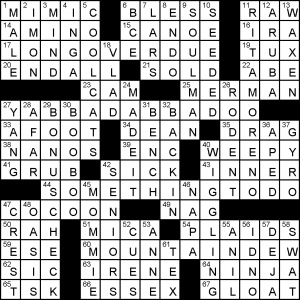 Elsewhere, we have a Holmesian pair of AFOOT & IRENE, the latter underclued in that context, IMO.

We also get SOULMAN and RITAMORENO as long musical downs.