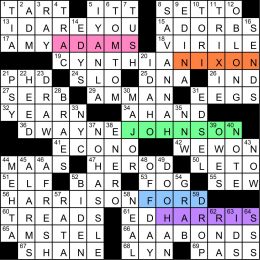 Good day, everyone! Here is hoping you all are doing well as we get set to close out the first month of 2021 soon!

Very timely puzzle, given that last week was Inauguration Day, where Joseph R. BIDEN was sworn in as our next commander in chief (52D: [46th U.S. President]). Before he was sworn in, Kamala Harris was sworn in as vice president, and in honor of previous No. 2s in America, today’s puzzle features actors whose last surnames are also last names of past vice presidents. Also, the time spans of the vice presidencies of the actors’ namesakes are added in the clue.

The chill has definitely set in throughout most of the country, but seeing SAVANNAH in the grid reminded me of the time when the minor league baseball team I worked for over a decade ago had a road trip there in the middle of the summer (8D: [Georgia’s oldest city]). Maybe outside of my time in Northeast Texas during a number of summers, the time in Savannah was the hottest I’ve ever experienced temperature wise. As fill, it’s awesome, and definitely NO HASSLE to the solver trying to finish (37D: [“Piece of cake”]). Saw the preview of the movie The Little Things and definitely was intrigued by the preview I saw, in which Jared LETO appears to be playing a disturbed person who’s a suspect in a crime that Denzel Washington’s character is trying to solve (50A: [Jared of “Panic Room”]). Not sure if I’ll watch the movie, but I’ll watch TRIXIE and reruns of The Honeymooners any day of the week (11D: [Mrs. Norton of “The Honeymooners”]). Joyce Randolph, the actress who played Trixie, is with us today, and she turned 96 this past October!

“Sports will make you smarter” moment of the day: DRAW (23D: [Put pen to paper]) – With the Super Bowl matchup now set, the time where people explain the nuances of the game to the uninitiated ratchets up a few levels as we count down to Super Bowl Sunday. You will definitely see a PASS [69A: [Quarterback’s throw]) or 80 when the Tampa Bay Buccaneers and Kansas City Chiefs play for the championship, but there is an outside chance that you might see a quarterback DRAW, which is a designed run by the quarterback in which he drops back a couple of steps after receiving the ball, as if he’s retreating to pass, before starting to run upfield. Definitely a possibility that Kansas City’s quarterback, Patrick Mahomes, will run a draw next Sunday. If Tom Brady were to run a quarterback draw, however, I’ll eat my shorts! With ketchup.

We have a very nice double theme today. The revealer is ECHOLOCATION (57a, [Skill shared by bats and dolphins, and a hint to the starred answers]). The “echo” is an indication that words are repeated in the other theme answers and “location” alludes to the fact that all of the themers are place names, more or less. 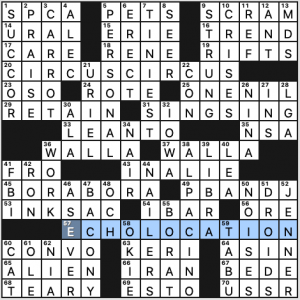 The repetitive nature of the theme certainly aided in filling in squares, and I wasn’t sure I was going to like it if that’s all it was. But that revealer is perfect and ties everything together so tightly that I can’t help but admire it. Nicely done.

I’d like to point out that the theme entries are a 12, an 8, a 10, and an 8, plus the 12-letter revealer. Normally you couldn’t make something symmetrical with that set, but since the 10 breaks up into two 5s and can go in the center—voila!—the grid is set. Sometimes the constructor has to get creative with what they’re given.

Not a lot in the long sparkly fill department, but you could do a lot worse than AL PACINO. PERSONAL, TINIEST, and NAILERS (meh) round out the set but are more workmanlike. 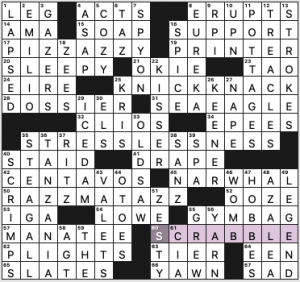 SCRABBLE is the name of the game, and the revealer clue is 60a. [Game in which the answers to the starred clues are legal plays but cannot be formed even if you have both blanks]. Sure enough, those four theme answers are in the list of words you get when you google words that can’t be made in scrabble even with both blanks. PIZZAZZY, which it’s likely almost none of us has ever used; KNICKKNACK; STRESSLESSNESS, another who-the-heck-would-ever-use-that word; and RAZZMATAZZ. Eh.

Three stars from me. “Here are some words from a list I came across” doesn’t really excite me. 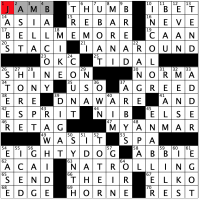 What is the theme, you ask? I’ll give you a hint: it’s election related!

So the first letters of the theme answers spell B-I-D-E-N, and the replace the letters T-R-U-M-P in common phrases. There is slim chance that this puzzle will spark a riot on the Capitol, so that is good! I admit I didn’t see what was going on at first, but I solved this on Monday afternoon, and I was exhausted, so that is my story! I am semi-surprised there wasn’t a Schrödinger crossword with the two presidential candidates; if I missed one let me know! 4.7 stars today for a light-hearted take on the transfer of power here in the U.S. 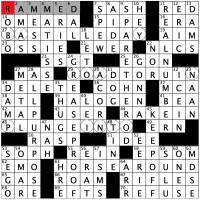 We have circle! What could they possible mean this time?

There is certainly a fair amount of “horsing around” going on in this puzzle! All of the circles contain types of horses. There are lots of different types, so I am glad this puzzle kept it simple. It is Tuesday, after all! 4.3 stars from me.

What’s a name? Your career apparently! 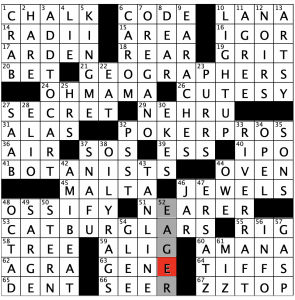 I like apt names. Universal puts them in clues a lot, but here they take center stage. It’s a bit wonky in that CAT BURGLAR doesn’t strike me as a “job” per se. POKER PRO doesn’t seem like a “job” either in a sense. But fun enough.

Do you know anybody named Ace? I only see guys named Ace in the movies. Ace Ventura… was there an Ace in Top Gun? And I vaguely recall Ace as the name of the antagonist in Stand By Me. I could be wrong. But I’m going to let the uncertainty hang there and avoid googling.

OILY RAGS? Is that a stand-alone? I found that weird.