I need to make this short and sweet. Ongoing shoulder issues mean sitting at a computer is very uncomfortable for me. Just got out of an MRI so hopefully I can start to get some relief soon.

Theme: Silent Ks are added to the Ns in certain phrases. 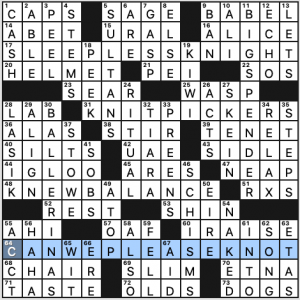 Kind of a basic theme for the end of the week, but the puzzle itself is solid all around. 3.7 stars. 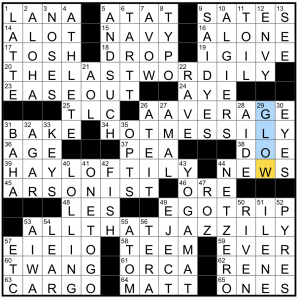 This Thursday’s puzzle doesn’t feel quite as conceptual as the last few Thursdays.  Adding in commas helps to parse the cluing here – HOT, MESSILY is “L iKe aN Ov eN”.  We also have THE LAST, WORDILY, HAY, LOFTILY (my favorite of these clues), and ALL THAT, JAZZILY.  The more I sit with it, the more this theme grows on me, but in the midst of solving I wasn’t really getting anything to hang onto until I realized I had one theme clue ending in ILY and had letters in the grid that meant all the theme answers would likely follow suit.

other nice grid bits: ATAT, A AVERAGE (which I tried to make RAVE AGE, but ATE IT in the downs wouldn’t allow that), ARSONIST, EGO TRIP, TWANG, LATTE, ALGIERS, and YOGA MAT

Short review tonight because I have had enough of staring at the computer screen. SO MUCH ZOOM.

Anyway. I enjoyed this Themeless. I would have loved a bit more challenge – in general, I’d be happy if more of the Fireballs were, indeed, blazingly hard. It’s a good puzzle.

The Trademark Peter Gordon Very Long Clue shows up at 48a [J. Robert Oppenheimer said that he remembered the line from the Bhagavad Gita “Now I am become Death, the destroyer of worlds” after the first one]. The answer is A–TEST. 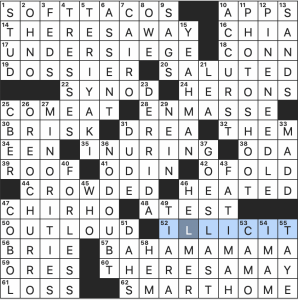 What I didn’t know before I did this puzzle: that OREO CHURROS are a thing.

This was a fun puzzle to solve and an amusing theme, even though I can’t make head or tails out of one of theme answers. I’m counting on our very smart and generous commentariat to enlighten me.

The three theme answers I understand swap the first two letters of one of the words. 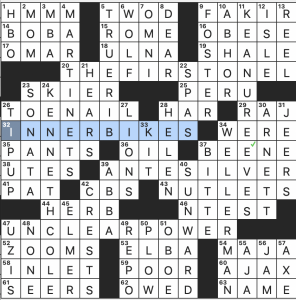 I like the theme already and I’m sure I’ll like it more when someone decodes 32a for me.

Lunch break is almost over, so here’s “what I didn’t know before I did this puzzle.” I didn’t know OMAR Ilhan’s Twitter handle (@IlhanMN) or that the national bird of PERU is the Andean cock-of-the-rock. Quite the handsome avian, that. 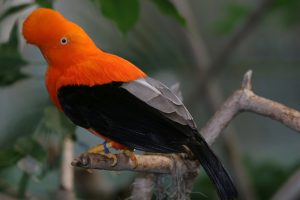 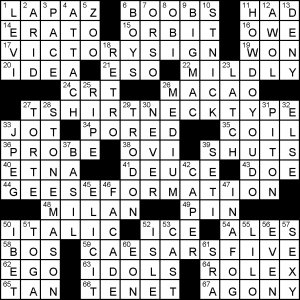 It’s clue/answer reversal time. Today’s answer is [V] and the clues are three v-shaped things: VICTORYSIGN, TSHIRTNECKTYPE (such an awkward clue… er answer), and GEESEFORMATION. Then, combo-breaker! We have CAESARSFIVE.

With such a staid theme, we could have used some fancy clues, but I count [Summer shade] for TAN and [Long division?] for EON.

I still find it bizarre that Americans would consider a BIGMAC a [Classic fast-food sandwich…] when it’s clearly made with a bun and not slices of bread.