Finally! The first NYT themeless by a woman in something like five weeks. I sure hope the rest of the year isn’t 90% of Fri/Sat puzzles made by men. 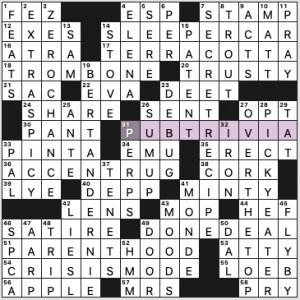 My single most beloved thing in this puzzle is 31a. [Bar exam?], PUB TRIVIA. A great entry with a twisty li’l clue—what’s not to love?

Other fill that pleased me: SLEEPER CAR on a train, the TROMBONE my husband and son both played, an ACCENT RUG, CRISIS MODE, EXTRA SPICY, ZERO CHANCE, BERT AND ERNIE, SECRET RECIPE, OVER THE TOP, and PICKY EATER. You realize, of course, there is zero chance that the picky eater will be excited to try your extra-spicy secret recipe.

It’s kind of a weird grid design, isn’t it? Each corner has a double stack of 10s instead of a triple stack, and those 8s, 9s, and 12s criss-cross them hither and yon.

4.25 stars from me. A good start to the last weekend in January. 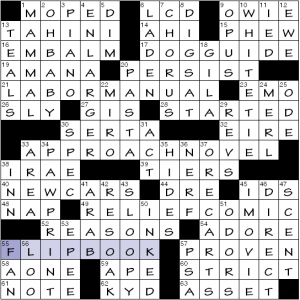 This is a very good theme with an inspired revealer. Quite well done on that front. The ballast fill, too, is of fine quality.

… and a further grim coda to that: 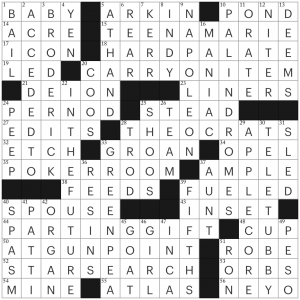 It’s Friday, team! And we have a lovely puzzle from Patrick Berry that demonstrates the New Yorker’s range, drawing on entries and clues that are (mostly) excellent but also (mostly) less-current than some of the other puzzles we see from the publication. Which, arguably, is a good thing! There’s something for everyone in the New Yorker crossword, and although some of these references may be less familiar to younger solvers (e.g. TEENA MARIE, STAR SEARCH, the fact that Matthew BRODERICK was the voice of Simba), the puzzle still feels fresh and smooth.

Long entries today were TEENA MARIE / HARD PALATE / CARRY-ON ITEM / PARTING GIFT / AT GUNPOINT (yikes) / STAR SEARCH / IN THE FUTURE / PALINDROMES / ACCEDED TO / BRODERICK / APPLE CORE / TELETUBBY. All of these are pretty solid, although IN THE FUTURE, I personally would prefer not to see the entry AT GUNPOINT because that’s pretty gruesome for a first-thing-in-the-morning solve. This puzzle also raised a lot of questions for me: Are the TELETUBBies still on television? Why is it called a HARD PALATE? What is NITER? All questions answerable by google, for sure, but I’m in a rush so I leave them as an exercise for the solver.

Overall, pretty good end to the week! Plenty of stars from me – wee you on Monday.

Let’s give a big crossworld welcome to today’s debut constructor! The Inkubator crew is amazing. They publish really good puzzles with feminist/woman-focused content, promote equity in crosswords in general, and mentor new constructors as well. I don’t often finish puzzles in less than three minutes, not being Stella, and when I do I rarely enjoy them this much. This was fun!

Each of the theme answers is a woman with a city in her name. 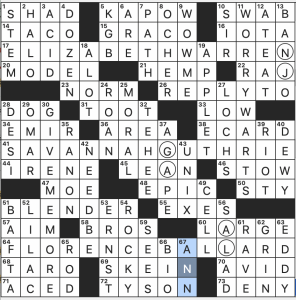 But wait, there’s more! Not only did Meconya find three city-named women with 15-letter names, she intersected each theme answer with the postal abbreviation of the relevant state: NJ, GA, and AL. Very cool!

What I didn’t know before I did this puzzle: that the UK’s movie org. is BAFTA. I also did not know that the last name of RAJ on The Big Bang Theory is Koothrappali. I watched ten minutes of that show a few years ago and found the racial and gender stereotypes appalling.

The revealer is STATHEADS (33d, [Data whizzes, and a hint to the starts of 6-, 11- and 28-Down]), a phrase I’ve never heard before, but it’s easy to infer its meaning. The three vertical themers all start with letters that spell out one of the common averages in statistics. 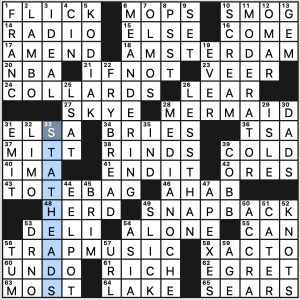 I was never one for stats and I always got these mixed up. But here’s a good, clear explanation I found on purplemath.com:

“The “mean” is the “average” you’re used to, where you add up all the numbers and then divide by the number of numbers. The “median” is the “middle” value in the list of numbers. To find the median, your numbers have to be listed in numerical order from smallest to largest, so you may have to rewrite your list before you can find the median. The “mode” is the value that occurs most often. If no number in the list is repeated, then there is no mode for the list.”

Got it? There will be a quiz tomorrow. 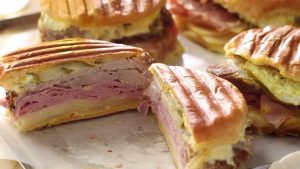 As for the theme itself, well, (1) I never heard of the revealer phrase and (2) when all your keywords mean “average”, it’s hard to get too excited about it.

MEDIANOCHE is a fun entry though. Here’s a recipe. Seems like a lot of work for the middle of the night (let alone the health issues of eating so heavily and then going to bed).

Looking at the fill, there’s a lot to like: FRYBREAD, AMSTERDAM, COLLARDS (though I’m used to hearing “collard greens”), TOTE BAG, TRAP MUSIC, SNAPBACK, MERMAID, and KODIAK, plus theme-adjacent LESS THAN.

Clues were on the straightforward side, so I will end here. A solid theme, but I found the fill more interesting. 3.5 stars.