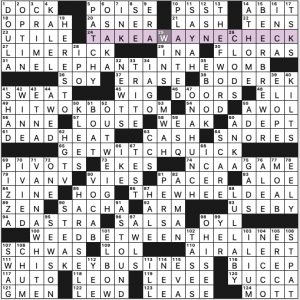 I am not sure if either of these constructors identifies as Black, but I was hoping to see maybe one of the other constructors from last year’s Black History Midis puzzle pack in this Sunday’s byline. Black History week lasted six days? At any rate, congrats to Katie Hale, who makes her debut today.

The constructors’ notes at Wordplay tell us they’re both moms with young children, and the theme resonated with them. I do question whether we want to tag this as “Toddler Talk,” though, given that there are adults with rhotacism, too. I’m fine with letter-change themes with entertaining results, but in general would prefer not to link them to speech impediments.

Fave clue: 88d. [Rock song?], LULLABY. As in rocking the cradle or rocking the baby to sleep in your arms.

Surprised to see a long partial (with a good clue): 19d. [Slice of toast?]. “HERE’S TO—”. Not that I object to it, necessarily. Just thought the NYT frowned on partials over 5 letters. The legendary Merl Reagle certainly made use of 7-letter partials in his puzzles, and it doesn’t stop anyone from enjoying the crosswords. (By the way: You can still buy books of Merl’s puzzles at SundayCrosswords. His widow Marie told me she was sending out orders every day during the holiday shopping season! One of them was the two books I ordered for my mother, who loves Merl’s puzzles most of all. 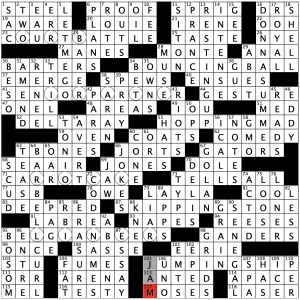 THEME: Every other letter of a word in a common phrase is circled, and each has its own apt revealer. Simple concept, but tougher than it should be to explain in a sentence!

I co-solved this with a newer solver who is intimidated by the 21x grid. She sticks to the NY Times Mini Puzzle on the app and doesn’t venture out much further. This puzzle, however, could not have been a more perfect introduction to how accessible and fun “regular” crosswords can be. The theme was crystal clear after the first set of themers, and when we hit the next one and found IRATE was circled, she said “I bet the next long answer is HOPPING MAD!” When that proved correct, she was delighted. “What a cool idea!”

We guessed SKIPPING STONE without help, and got JUMPING SHIP off of the initial J.

A very steady and fun solve from north to south with no real hiccups.

Did anyone else have to sing that lyric for LAYLA before figuring out the answer?

Enjoyed the UNO fun fact: [Game with a Braille version that was released in 2019]. I had never considered that board games and card games could probably be more accommodating than they are to non-sighted people. 2019 seems a little late to be introducing Braille into that world. Does anyone have any insight on this? A quick google shows a few classic games that have the Braille option, but doesn’t look like a lot of availability.

I thoroughly enjoyed this one, more due to  the experience watching a potential solver become a solver.

Alan Massengill’s Universal crossword, “Get Away From It All” — Jim Q’s write-up

You can’t avoid this puzzle!

THEME: Common phrases reimagined as if they are about evasion. 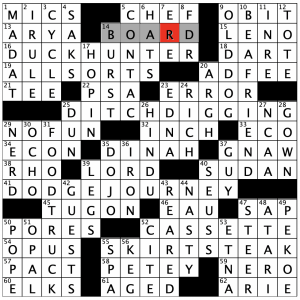 Fun, clean puzzle with a consistent, solid set of themers.

I’m only seeing now the fun clue at 58A [Nickname that sounds like the letters around “Q, R, S”] P – T = PETEY! I don’t know about that as a nickname. I think I’d be annoyed if people called me PETEY and my name were Pete. I mean, my close friends and family call me “Jimmy” and it’s fine. But PETEY should just be the dog on the Little Rascals and that’s it. [Kidding of course. I don’t want a horde of PETEYs trolling me. Though I will admit the phrase “horde of PETEYs” is very, very funny to me. ]

Not much else to say other than “Thanks for this one!”

I enjoyed the theme and have one major issue with the fill. We’ll get to that later.

The theme answers are ordinary phrases clued as if they apply to a workplace – hence the title. 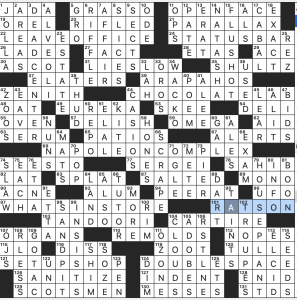 It’s consistent and funny, and all the phrases are solidly in the language. Nice Sunday theme!

Back to my major issue with the fill. I was stunned with I got Mr. Happy Pencil because I was convinced that I had a mistake in the NW. 37a [Click beetles] are, apparently, ELATERS, I’ve been doing crosswords for over 40 years. If I’ve seen tht before, I promptly (and deservedly) forgot it. It’s a terrible entry. I can see that it would be difficult (or impossible) to get rid of the word without scrapping the whole section. Even so, I would have preferred [Those who send you to cloud nine] which is at least inferrable.

I stumbled around a bit in the rest of the puzzle, but that was my fault. I put in RES instead of REZ-de-chausée at 25d, and SWAMI instead of SAHIB  at 78a.

What I didn’t know before I did this puzzle: see above about ELATERS. I also did not know that Jada Pinkett Smith played Niobe in the “Matrix” sequels.

The title evokes GREEN EGGS AND HAM so I was primed for the revealer at 110a [Sam’s book, and a hint to the starred answers’ ends]. Now let’s see what the theme is… 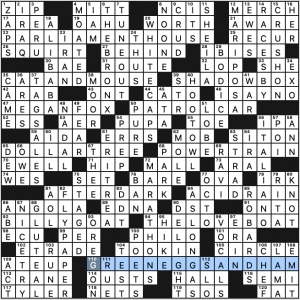 Universal Sunday crossword solution · “I Would Not Eat Them…” · Victor Barocas · 2.7.21

Would you? Could you? In a PATROL CAR.
Eat them! Eat them! Here they are! 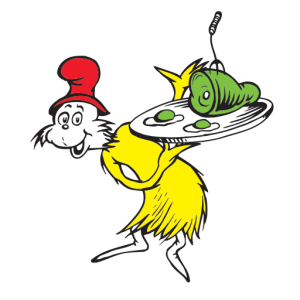 Say! In the dark? Here in the dark!
Would you, could you AFTER DARK?

Would you, could you in the ACID RAIN?

Could you, would you with a BILLY GOAT?
Would you, could you on THE LOVE BOAT? 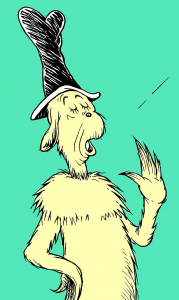 I looove this theme, and I wish to heck I’d thought of it! It’s fun, playful, and rhythmic all at the same time.

(Rest assured, if you don’t know the book, the unnamed curmudgeon finally assents to trying the unusual dish and discovers he would in fact eat them anywhere.)

I did not know PHILO [Live TV option], so that hung me up at the end. EWELL [Surname hidden in “farewells”] is also an uncommon entry.

I want to get this posted, so I won’t go through all the clues, but I will note my favorite: [Long running events?] for MARATHONS (note the lack of a hyphen).