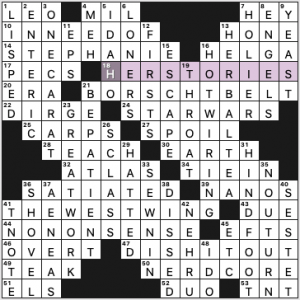 Hello again! We’re back with another themeless puzzle in Black History Month’s week of NYT puzzles crafted by Black constructors. This one’s by Kameron, who’s a themeless specialist as well as a Rolling Stone film critic. It played easier than Erik’s Friday puzzle for me, but perhaps I’m just channeling Kameron’s wavelength by virtue of doing pretty much all of his New Yorker puzzles.

(Side note: Kameron Austin Collins and Brendan Emmett Quigley both have 7/6/7 letter counts in their tripartite names.)

Lots of fresh fill here. I liked the chatty entries, “BE PATIENT” and “GREAT WORK!” Other colorful entries include HERSTORIES, the BORSCHT BELT, THE WEST WING, DISH IT OUT crossing DISSED, NERDCORE (new to me: 50a. [Music genre that includes “geeksta rap”]; see the MC Frontalot video below, with full captioning), HOT-WIRING, and HERBAL TEA.

Did you notice how wildly open this grid is? Long things intersecting other long things, great flow around the racetrack and into the NE and SW annexes. There aren’t a lot of 3-letter entries crossing all the stacked pairs of long answers, and this was not an easy grid to fill cleanly. The worst thing in the grid is EFTS, a bit on the crosswordese side, but it pretty much stands alone. I don’t love plural NANOS. The rest ranges from rock-solid to sparkling like a ONE-CARAT diamond.

4.25 stars from me for this NO-NONSENSE puzzle with an impressive grid layout. 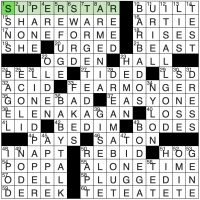 This is another new name to me, and this puzzle took me few beats longer to solve. His name was in the database, so there may be some other LAT puzzles that have the same byline. I count 70 words in this one, with 12 entries that are 9- or 10-letters long. I didn’t realize this until opening this one up in some software, but there are 28 5-letter words here! Two corners are chock full of them. This one pushed back slightly, but ended up being a fun solve overall. Looking forward to more puzzles from Ezra! 4.3 stars today.

That is all! Enjoy your weekend! 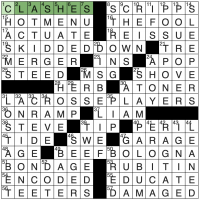 Under ten minutes! One side effect of the easier “Stumpers” is my time footprint is a wee bit smaller. This frees up time to do other puzzles! I am getting on Greg’s wavelength a bit, so that helped for this one. Great 68-worder today. 4.5 stars from me. 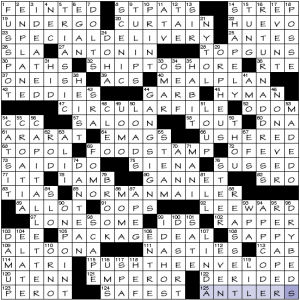 One might presume from the title that this would involve rebus squares, but that isn’t the case. The boxes in question are just regular crossword squares, and the theme is postal reinterpretations of common phrases, to varying degrees.

These are just moderately entertaining to me. Kind of like the post office at its best—getting the job done without being fancy about it.

THEME: Phrases that share the name of a digital device that has a screen. 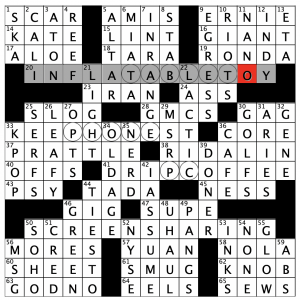 Odd that the term “SCREEN SHARING” is so commonplace now, for me anyway as a teacher. Last year, this very revealer wouldn’t have struck me as something “in-the-language.” Now it’s very much a part of my day-to-day life, sharing my screen in my Google Meets and Zooms to serve as a chalkboard in a sense.

Still this wasn’t my favorite puzzle with this sort of concept. For starters, the themers seem to be sharing the device, not the screen. The screen is part of the device, but they could also be sharing all sorts of other stuff besides screens. PC in particular is so short in comparison to TABLET and PHONE that it doesn’t seem to belong. Also it’s an abbreviation where the others aren’t.

And lastly, my age-old plaint that Universal is still running crosswords that are dependent on circles, yet they are asking the bulk of its solvers to count and circle their own letters. I was given an alert that this would be changing, but that was about a year ago.

Fill on this was just fine, and I solved very steadily north to south. Nice K-POP / PSY cross :)