Hi Friends! Laura here blogging for Matt, who has the excuse of welcoming a baby daughter, born on Wednesday! I won’t tell you her name here, but you’ll find out on Tuesday at noon when Joon posts his write-up of this week’s Matt Gaffney’s Weekly Crossword Contest.

This month, Pete and Andrew (who may be a debut! he’s not in our tag library) would like us to find a famous song.

We have three themers that are common phrases:

And another suggestive entry: 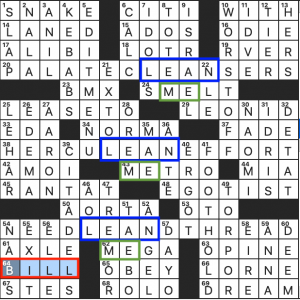 Turns out, each of those phrases conceals the word LEAN:

And each of those LEANs is centered over the letters ME, which means our answer is “LEAN ON ME,” a famous song by the iconic singer BILL Withers, who passed away on March 30, 2020. And what better song for a month when I could step up to help a friend? Just call on me, brother, when you need a hand.

Withers first released the song in 1972. Lots of GenX teens first discovered it (if they didn’t have parents with a soul record collection) from the 1987 cover by Club Nouveau, which was played at everyone’s graduation later that year. There have been tons of covers since, including by Thelma Houston and the Winans (for the 1989 film of the same name), Imagine Dragons, the cast of Glee, the Playing for Change “Song Around the World” project (I love everything that’s come out of this), John Fogerty and his children in a fundraiser for Black Lives Matter this spring, every Canadian singer ever for Covid relief, and a bunch of people, spontaneously, in a tunnel waiting to get into the viewing area of Obama’s inauguration in 2009. Here are John Legend and Stevie Wonder singing with Bill Withers at his induction into the Rock and Roll Hall of Fame in 2015: