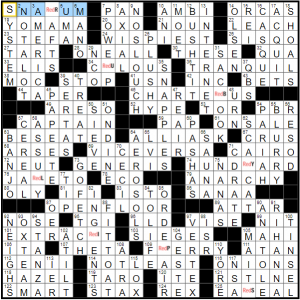 Hello lovelies! It’s Erin Milligan-Milburn filling in for Amy, and I’m glad the puzzle gods bestowed a clever Sunday concept upon me. Lisa has not had a New York Times puzzle since 2006, but she’s back for Valentine’s Day 2021. Let’s see what we have here…

Reading the single letters in the red squares from top to bottom gives us RUBY LIPS, which are commonly associated with Valentine’s Day.

The grid itself has some great fill and cluing. I love seeing SISQO and RIHANNA and PLUSHY and GO FETCH. The punny/wordplay clues are great, including [Post production] for CEREAL, [Place with robes and sweaters] for SAUNA, and [A fine mesh this is!] for SIEVE. On the other hand, there are quite a few three-letter abbreviations and partials such as IFI, IER, ITE, ISR, TGI, and others.

Things I learned from this puzzle: 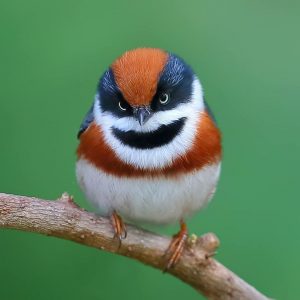 That’s all I have for today. Thanks for letting me stop by!

Hopefully, the brides and grooms in this puzzles don’t share the same fate as Shakespeare’s STAR CROSSED LOVERS! 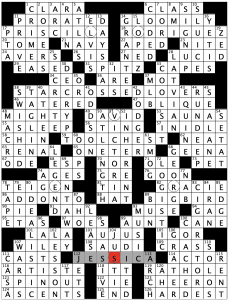 The revealer is excellent, though it is unsettling how often the title characters of Romeo and Juliet are used as some romantic paradigm. I mean, it takes place over like… a few days? And wasn’t Romeo brooding intensely over some other girl moments before meeting Juliet? I have a feeling if they made it another week, they’d each have moved on to their next flame.

That, of course, has no bearing on the merits of this puzzle, which is very clever and well constructed. It’s always a little fun to open a puzzle with a unique shape and symmetry, this one accommodating the names of six different couples. My favorite power couple here is GEORGE and GRACIE.

Poor CLARA at 1-Across! She looks so lonely, especially being half of another power couple from the 1800’s. Alas, Robert is nowhere to be found.

Lots of fill and/or cluing that evokes the Valentine’s sentiments like:

And that’s just the acrosses!

A delightfully simple concept that has something to please everyone and a fun little AHA (or OHO!) moment.

I was relieved that the theme didn’t refer to the treacly single-panel comic of the same name. All the theme answers are people who said or wrote something that starts “Love is….” I’ll take it on faith that all the quotes are correctly attributed. 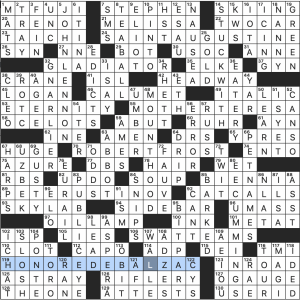 A fitting Valentine’s Day theme. The only one I remember seeing before is the cummings line. The quotees are a varied (although very white) bunch. This theme will not be popular with folks who don’t like their puzzles full of proper names. I myself prefer a bit of wordplay with my Sunday coffee, and that’s a matter of personal taste. It’s well done.

Unfortunately, we also have [“… ___ to come”] at 51d. The answer is IS YET, the ellipsis stands in for “the best,” and it’s way too close to the construction of the theme clues.

What I didn’t know before I did this puzzle: that the USOC added a P to their name and is now the United States Olympic & Paralympic Committee. Good on them.

As I worked through the theme clues, I was looking for [….an ever fix’d mark], from the Shakespeare sonnet that was read at our wedding. Hey, I was 24. I know it’s a cliché, and I still love it. Here’s Sir Patrick, who was not at our wedding.

I solved the puzzle without realizing what the theme was and, in fact, without even reading the full clue for the revealer. Let’s see what it says. 118a SOUNDS OF SILENCE is clued [Album with “I Am a Rock” … and a hint to the Down, but not Across, pronunciations of the circled letters]. Ah, ok. The circled letters spell out SILENCE, and each of those letters is silent in the Across answer, but is soundful(?) in the Down direction. In fact, in the Down entries, each letter “says its name,” as it were (usually by way of an initialism). 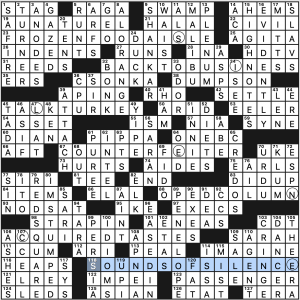 This works for me—in no small part because it’s Saturday night of Valentine’s weekend and I’ve had multiple adult beverages at this point. I do like the fact that in each Down entry we don’t just hear the letter’s sound, but we hear the letter itself. Yes, that means there are a lot of abbreviations there, but it’s a point of consistency that I enjoyed.

Turning to the fill we find AU NATUREL getting things off to a good start in the NW corner. Elsewhere, STRAP IN, IMAGINE, PASSENGER, DUCK / A L’ORANGE, HIGH NOTES, DUMPS ON, RED SQUARE (clued via a checkerboard, not the Moscow location), “I’M STUMPED,” and PENELOPE. Also, it was nice to see SHANKAR when we usually get the first name Ravi.

In the less-enjoyable column: AGITA [Gut concern] and CSONKA [Dolphins Hall of Famer Larry]. But everything else is within normal parameters, so count me satisfied.

Valentine’s Day was not lost on CrossWorld today :) 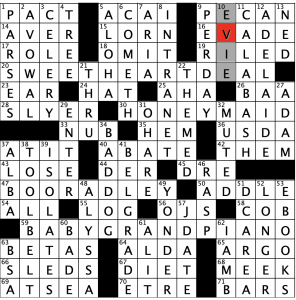 Cute, clean, and consistent. Can’t ask for much more! I especially appreciate that, in the context of the answers, none of those has anything to do with a pet name- which must’ve been tricky with SWEETHEART in the mix!