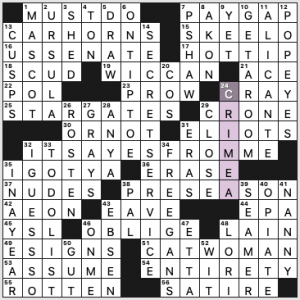 Faves: WICCAN, “IT’S A YES FROM ME” (but not the I GOT YA / I GUESS SO / ON ME overlaps), PRESEASON (this coming Monday is the Boswords preseason puzzle!), Leo ROSTEN, CATWOMAN, SECRET SERVICE, ANYA Taylor-Joy, FREEGANS, “GET A ROOM!”, pretty place name ALICANTE, and POPEYES (the clue delivered trivia I didn’t know: [Restaurant chain originally called Chicken on the Run]).

THEME: Phrases that have three components 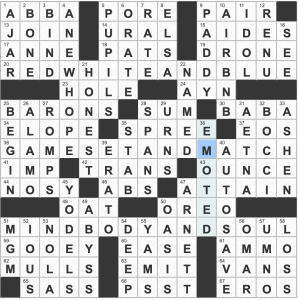 I’m not entirely sure if I completely understand the theme. I feel like I’m missing something. Do the items in the clues share something in common? Kind of feels like they do. Like, tape, paper  and ribbon are all things in my… junk drawer? Reading, language and music are all… school subjects? Show, piece and play are… things that can be performed in a theater? Am I reading too much into this? Or not enough?

At first I thought each of the words could also precede each of the words in the trio too. Because, while BLUE RIBBON is definitely a thing, so is RED RIBBON (at least in schools, RED RIBBON week is a popular anti-drug use campaign). And WHITE RIBBON is not unimaginable. But then is WHITE PAPER a thing? Or is it just that paper is white?

So I’m a bit addled, although I found the mystique somewhat intriguing. 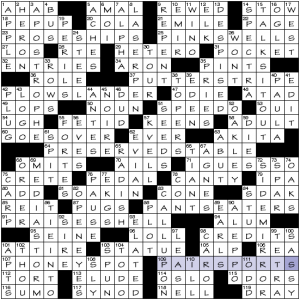 Pretty standard theme here. Just affix the letters P and S, respectively, to each component of a two-word phrase or compound word to produce silliness.

As I said. Solid, but nothing exciting. 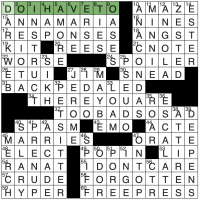 Quick one today! Nice and smooth. I think my brain is working better since I have been running a bit and also burning a ton of calories shoveling mounds of snow! We were all snowed in this past Tuesday; mostly back to normal now. Whatever “normal” is. Not that being snowed in is a bad thing; we can always do more puzzles! 4.5 stars for this one. Nice puzzle, Craig!

That is all! Off to do more puzzles, of course! 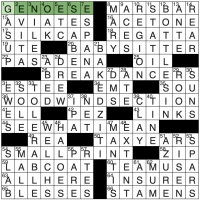 Slightly tougher than normal; still easier than they used to by. Greg’s puzzles for me are either really smooth or totally baffling. This one was more on the smoother side. Didn’t feel hopeless at any point of this solve. I have certainly been lost on my fair share of these “Stumpers” over the years. Always fun to do a Greg Johnson puzzle. 4.6 stars today.