Greetings, fans of themeless crosswords! The Boswords crew has another virtual crossword tournament coming up, the Spring Themeless League. There’s a preseason puzzle on Monday, February 22, sort of a dry run for the online solving and the Twitch video stream and livechat. The competition runs the next eight weeks, on Monday evenings from March 1 to April 26. If you’re not free every Monday night, that’s fine—asynchronous solving is fine. I enjoyed the Fall Themeless League, competing in the toughest of three divisions, “Stormy”—and felt that all of the Stormy puzzles were harder than most Saturday NYTs. There are intermediate “Choppy” and easier “Smooth” divisions, too. More info and registration links here. 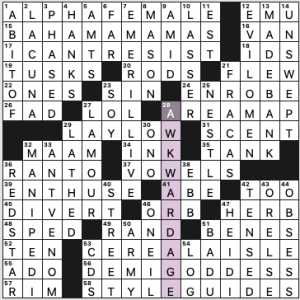 Overall vibe, straight-up a four-star puzzle. ENROBE and AREA MAP are maybe a bit flat, but I liked the puzzle. 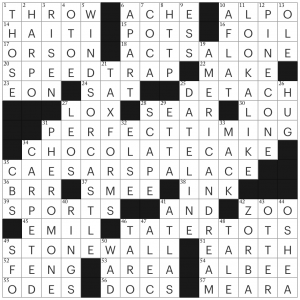 This was a delight! A very, very rapid delight, clocking in around my average Monday NYT speed. I rarely have the kind of solving experience where I tear through a puzzle so quickly that I don’t even see half the clues/entries, but today I did. Which in this case is too bad, because the clues are classic Robyn Weintraub excellence— even the short fill gets new and interesting clues today, so when I went back and reread them to prep for this writeup, I laughed out loud twice and jotted down nearly 10 I wanted to include.

Let’s start with the long stuff, though, which also *all* shines. In the central staircase we have PERFECT TIMING / CHOCOLATE CAKE / CAESAR’S PALACE. This almost tells a story of showing up just in time for a Vegas a birthday party? Which, although I don’t personally like casinos, still sounds like a good time to me! We also have long downs WINDSOR CASTLE / AMERICAN DREAM, which also felt like they were in conversation — the British dream and the AMERICAN DREAM, which, per the excellent clue, is called that […’cause you have to be asleep to believe it”: George Carlin]. Other long entries, all of which I loved, were: STONEWALL / SPEED TRAP / ACTS ALONE / TATER TOTS / LOOK ALIKE / PHEROMONE.

Favorite exciting clues for short fill that usually doesn’t get this much love:

I could keep going, because the clues are just loaded with fun trivia and wordplay, deployed the real artistry that Robyn brings to all of her puzzles, but I will leave it there for now.

Overall, I don’t have a single nit to pick with this charming, easy, beautifully constructed puzzle. All the stars from me, and happy weekend all!

Oh, ps., I want to echo the announcement at the top of the page and urge you to sign up for the Boswords Spring Themeless League! I’m contributing a puzzle, and so are a lot of other incredible constructors, including New Yorker contributor Aimee Lucido. You won’t regret it!

Theme: Places where you’d see a plus sign shape. Each theme answer is clued with the words “place for a +.” 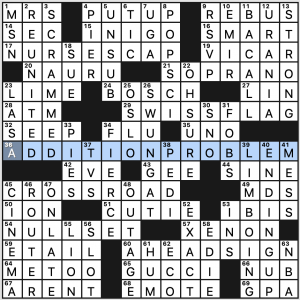 I picked some nits above, but I like the basic premise here. Each plus sign shape has a different meaning (medical aid, Christianity, mathematical addition, and road intersection). Plus (see what I did there?), there are a couple of pluses in the grid itself composed of black squares. That’s a nice touch.

Moving to the fill, I liked SCRAMMED, SOPRANO, NULL SET, and tiny NAURU (third-smallest country in the world after Vatican City and Monaco). I’ve seen it before in crosswords with its friendly letters, so it’s worth storing in the memory banks. Not sure how I feel about LIMBOING. You don’t usually see it in that form, but it’s still fun.

POPSCI [Genre for a physics article aimed at a general audience, informally] is not a term I’ve heard before, at least not in that abbreviated form. It’s never appeared in any puzzle listed in the Cruciverb database. But it’s also the popular name for the magazine, and I’ve decided I like it; I just wish there was a more succinct clue for it. 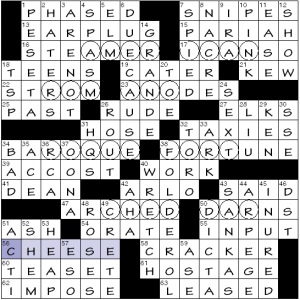 Wow. This theme was executed so smoothly that even after filling most of the grid and seeing the revealer it still took me several moments to perceive it. Then, “AHA” (42d [“Eureka!”]) (Things are drastically easier to spot when the relevant squares have been circled, as I’ve done for the write-up.

Really smooth, but I’ve already mentioned that. And these aren’t your common short-length crossword cheeses like EDAM or FETA, either. Very impressive.

I’m really sorry I’m posting this so late. Sophie Buchmueller’s debut crossword deserves better. It’s a gem. I was surprised when I saw my time – it felt like it took longer because I ran into several roadblocks and had to work my way back to where I got stuck. 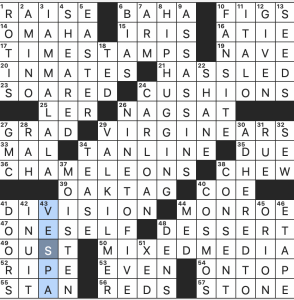 What I didn’t know before I did this puzzle: see above re: Williams role. I also had never heard of Betye Saar, creator of the MIXED–MEDIA piece “Black Girl’s Window.” Next time I get to MOMA, I’ll check it out.