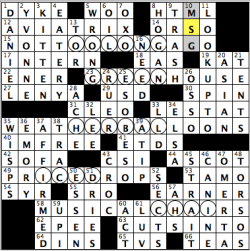 Good day, everybody! Hope all is well with you! At this time next week, it will be March! Yikes! (Well, if we keep getting all this snow and rain, it won’t feel like spring is coming any time soon!)

Whether in the middle of winter or getting ready for spring, its always nice to think about all the different TEAS one can choose from and drink to pass the time and keep warm. In today’s grid, we have the circles in the five of the entries representing bubbles, with the words formed in the circles spelling out a type of tea (66A: [Bubble ___ (drinks with tapioca pearls…and visual hint at the puzzle theme)]). Just recently, I got exposed to Thai iced tea (with sugar and milk) for the first time, and it was soooooo good! Now I’m thirsty.

Today’s grid is a 72-worder, allowing for some longer non-themed fill. Some of the highlights from those entries include the seldom-used (at least in my opinion) AVIATRIX (12A: [Amelia Earhart, per some news stories]). Crossing that was YVONNE, and that brought back memories of watching reruns of The Munsters, one of my favorite shows, growing up (2D: [Actress DeCarlo]). Then we have another wonderful actress, LENYA, who was on the original Broadway cast of Cabaret, though I remember her most as playing a Bond villain in the movie referenced in the clue (27A: [“From Russia with Love” actress Lotte]). When I started following horse racing casually, I totally was caught up in when there would be a next Triple Crown winner, as it felt to me like ages since AFFIRMED pulled off the feat now 43 years ago (37D: 1978 Triple Crown horse]). If I had been born about 10 years earlier, I don’t think I would have had that same feeling since, remarkably, Affirmed was the third horse to win all of the races making up the Triple Crown in the 1970s alone, joining Secretariat (1973) and Seattle Slew (1977). Missing those by a few years made the chase for the Triple Crown almost mythical before American Pharoah broke the slump in 2015.

“Sports will make you smarter” moment of the day: KAT (19A: [Kit ___ bar (chocolate treat]) – A story of success and sheer heartbreak all rolled into one. Minnesota Timberwolves center Karl-Anthony Towns, nicknamed KAT (obviously from his initials), was the No. 1 overall pick in the 2015 NBA Draft out of the University of Kentucky and has since gone on to win the NBA Rookie of the Year Award (2016) and make the NBA All-Star Game twice (2018, 2019). Last year, in one of the most trying years in our country, Towns saw his mother, Jacqueline, and six other family members pass away from complications of COVID-19. Towns has been one of the more active athletes in expressing thoughts of the importance of mask-wearing and taking COVID-19 seriously throughout these past 12 months, and I certainly hope that he has been able to find some inner peace as he resumes his basketball career after such a painful year. 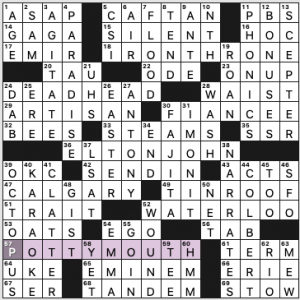 What a fun puzzle! The theme is pulled together by 57a. [One using crude language … or one saying the last parts of the answers to the starred clues?], POTTY MOUTH, and each of the themers ends with a synonym for “toilet”:

A breezy solve, which was a treat after getting my butt kicked by a challenging preseason (non-competitive) themeless from Boswords. (You can still sign up for the Spring Themeless Challenge, which launches next Monday.)

Four stars from me. What’s your favorite not-already-mentioned “potty” euphemism?

Well, between yesterday and today, I might finally remember that RAGA (1a) is music from INDIA.

You’re inviting heavy criticism when you title your puzzle “Two Thumbs Down.” But there’s not too much to complain about here. The theme is referring to the two NOs that appear in each of the theme answers. The revealer explains the situation with DOUBLE NEGATIVES [Grammatical taboos exemplified by 17-, 23-, 48- and 60-Across]. 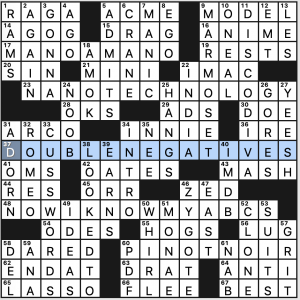 That works well. The revealer makes a great basis for a theme and the title gives a good hint without giving it away. Two thumbs up.

Top fill: DISCO DIVA (a phrase I’ve never heard before, but it was inferable), CUSS WORDS (which I have heard before),  ZYGOTE, and the cute, little MARMOSET.

This puzzle has me drawing a blank. Literally. But not really.

THEME: Phrases are clued with a dash, and the dash is interpreted literally. 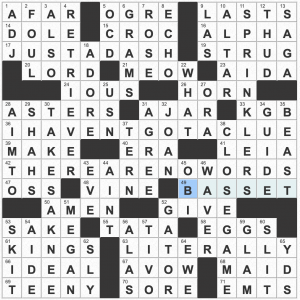 Favorite puzzle of the day! This one is fantastic. Especially after I initially groaned when I saw dashes in place of clues for the themers. Dashes are sometimes used in puzzles to indicate that the themer is part of another clue, or that there’s some sort of trick happening. They can be risky to use since the solver becomes dependent on the crosses.

But as soon as I uncovered the first themer, I loved the idea. The dash is the clue, or lack thereof.

JUST A DASH is adorable. I HAVEN’T GOT A CLUE is hilarious. THERE ARE NO WORDS is a fantastic phrase and so apt. I wasn’t expecting a revealer since it seemed evident what was happening, but LITERALLY (and the way it’s clued) was the icing on the cake. As a high school teacher, I hear that word literally a million times a day, and its misuse drives me literally insane. At least I don’t let it rub off on me.

Solid and delightfully playful puzzle from start to finish. 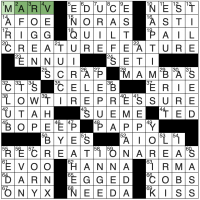 Better than a long email thread, the flavortext says! That is certainly true:

Again, the brainstorming session for this must have been fun! All of the theme answers have three instances of the pair RE, just as you might see in a long email thread of replies going back and forth. Clever! Textbook example of a Jonesin’ puzzle here. 4.6 stars

Some notes, including LOTS of Obscure Trivia! 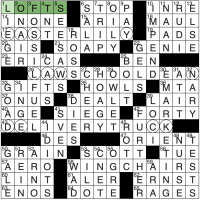 Take a load off and let’s discuss this crossword! Here are the theme answers:

Do you feel like sitting down yet? Yes, all of the circled letters make types of chairs, and the revealer at 58A ties it all together quite nicely. For those of you that don’t know, I am a retired UPS driver, so that clue/answer pair actually gave me a minor panic attack! Not really, but you get what I mean! Another great puzzle, Paul! 4.4 stars from me.