Theme: As the title hints, the letters EM are added to well-known phrases. 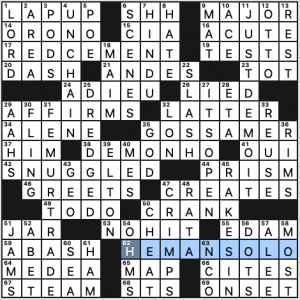 Overall, very enjoyable. Three of the entries were good for at least a chuckle, and that’s pretty rare for me.

Fill highlights: GOSSAMER is just a lovely word. Interesting—the top definitions mostly have to do with cobwebs, but I’ve only ever seen it referring to light, delicate fabric. I had no idea as to the clue’s [Diaphanous] definition, so I needed most crossings.

There’s a lot of other positivity in the grid—AFFIRMS, SNUGGLED, CREATES, UNCHAIN, RAKES IN, GREETS, LAP UP, and “IT’S OPEN!” Even CRIMPS gets an evocative clue [Fancifies, as a pie crust]. So it’s no wonder the solver is left with some good vibes. Oh, but wait, there’s also HATE, MAIM, CHEAT, LIED, SLASH, and ABASH.

An enjoyable puzzle with humor and good fill. Four stars. 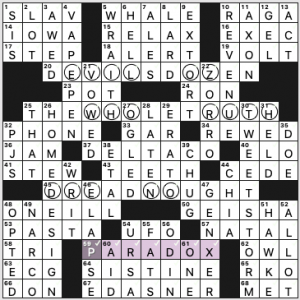 I didn’t actually look at the circled letters or the revealer clue while I was solving, so I had no idea what the theme was till I poked around afterwards. 59a. [Logical contradiction … or an aural hint to what are found in 20-, 25- and 45-Across], PARADOX, that sounds like “pair o’ docs,” and the circled letters give us fictional Dr. EVIL and charlatan Dr OZ as one pair, hip-hop legend Dr. DRE and Bond villain Dr. NO as another, and … oh no. Dr. RUTH Westheimer, the sexologist, is fine, but there isn’t a “doc” named WHO. There is a TV show called Doctor Who, and the character is called “the Doctor.” I would pay $100 cash money to get all crossword constructors and editors to stop treating the concept of a character called “Dr. Who” as legitimate.

Anyway! Here are the interesting entries with those circled names:

3.75 stars from me, with a quarter star docked for that doc WHO business. 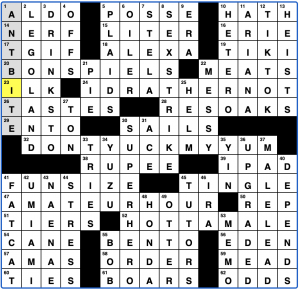 This week’s AVCX is a themeless from Matthew Stock that fully earns its 5/5 on the AVCX’s difficulty scale. 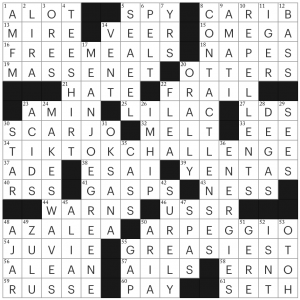 This puzzle made me feel old! I knew MEAN JOE GREENE (because Steelers fan), and did not know TIKTOK CHALLENGE (because refusing to download TIKTOK out of desire to maintain some modicum of screen-free time and would definitely become obsessed). Those were both fun long entries, as was MAKES WAVES [Has a ripple effect?]. CONTACT LENSES and REPELLENTS in the NE were a bit more staid, but also solid. Other good long-ish entries include ARPEGGIO, GREASIEST, FREE MEALS, MASSENET, and OTTERS (ok, OTTERS isn’t that long, but aren’t you glad you got to think about OTTERS for a second? With their whiskers? Holding hands in the water?)

Overall, a fun solve marred by some fill I could live without. Several stars for the long stuff! See you Wednesday. 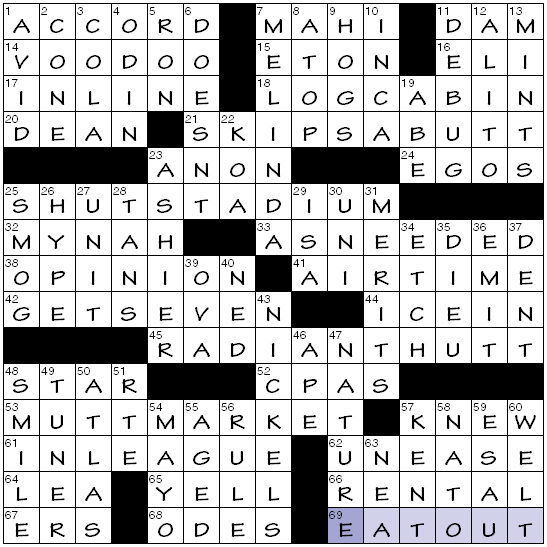 Little weird that three of the four end up wit -UTT formations. But the only somewhat viable alternatives are PEAT MACHINE or PEAT BRECCIA, and those are way too obscure. (55d [Like good Scotch] AGED) Conversely, there’s balance in that half of the altered words are the first ones and half are the last. This theme didn’t excite me, even if am now thinking of the famous Rutt’s Hut in Clifton, NJ.

I’ve got nothing else, so here’s a self portrait by Jean Restout. 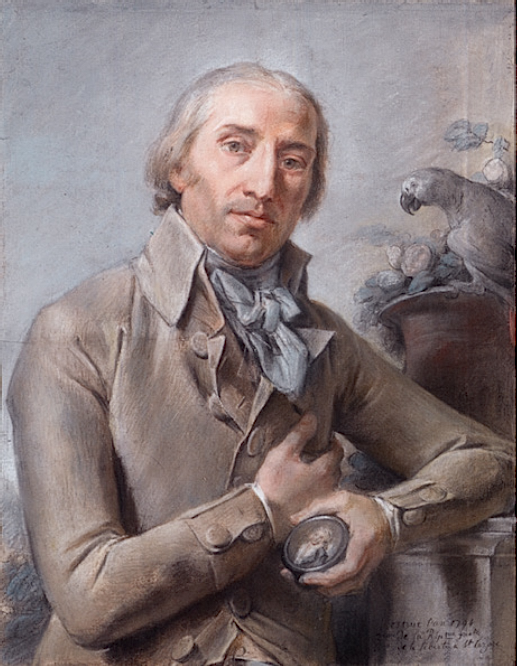 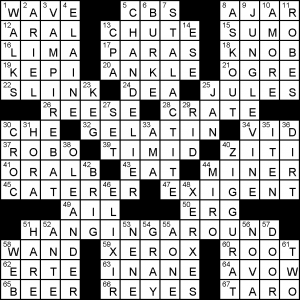 The theme and grid design aspects are a tad more intricate than is typical for a Wednesday LA Times. Although in essence the puzzle is a list of four things that hang: a VAMPIREBAT, a CHANDELIER, a STALACTITE (c for ceiling, g for ground!) and the largely fictional JUNGLEVINE trope. These are HANGINGAROUND. The grid design is clever. By using left/right symmetry, there are four theme answers hanging from the top of the grid and a discrete area for the revealing 13 letter revealer without needing a symmetrical mate.

Anyone else have GUARGUM before GELATIN for your “Gummy bear”? Apparently both serve the same function.

Although a lot of them were cliches, there was a playfulness to the clues we don’t always see as much I’d like. A CROC is a [Shoe that’s full of holes]; a MINER digs hard rock and CBS has an eye on TV.