This is Michael’s NYT debut. It’s a nice Monday! I got the theme immediately so there was no “aha!” moment, and that’s OK on a Monday. I have a couple of issues with the fill. We’ll get to that.

The theme clues are all cities and dates. 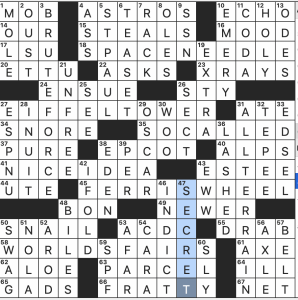 And the revealer: 58a [Event for which the answers to the three starred clues were built]: WORLD‘S FAIRS. Solid, consistent, and entirely Monday-accessible. Not exciting for experienced solvers. Ah, well, you can’t have everything.

My issues with the fill: UNFREE and FRATTY, both of which feel very roll-your-own. They don’t make the puzzle difficult or obscure. They still feel off.

What I did’t know before I did this puzzle: that the FERRIS WHEEL at the Columbian Exposition was the first in the world. 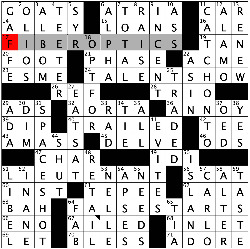 This theme seemed not quite appropriate for a Monday. Not the constructor’s fault; it’s executed consistently, and there’s a revealer, but I would say even with a revealer this one would have been better suited to a Tuesday or even Wednesday.

The revealer at 64A gets a mighty long clue: [Track meet infractions … or short words hiding at the beginning of the answers to starred clues]. That’s because this is a “things in common” theme, but the things in common are not entire words in the theme entries; they are portions of words. The answer, FALSE STARTS, turns out to mean that a word meaning a false statement is spelled out at the beginning of every theme answer. Thus:

I dunno…one of the reasons I’ve never been a huge fan of revealers is that a revealer takes a slot that could have gone to a theme entry, and in this case the puzzle is left with three non-revealer themers at a total of 31 letters. That felt a little light to me, especially for Monday when a fourth themer would have been nice for the solver. Perhaps CROCKER in the center, clued as [*Fictional Betty of the kitchen]?

Moving this puzzle later in the week might have also allowed NELLE at 53A to be clued with reference to Harper Lee, rather than not referring to any specific woman so that the solver could get an extra hint about how the letters work. (Or ADA could have been the Countess of Lovelace rather than the dental organization.) I count one woman referred to by name: ESME at 23A. Granted, the overall proper name count in the puzzle is very low, which is probably why it got chosen for Monday.

Overall, I’m ending on: Not a bad puzzle, but it’s a little frustrating that some different editorial choices could have made it, IMO, a better solving experience.

ART CENTER is the revealer at 66a [Place with a gallery, and a hint to this puzzle’s theme]. Each theme answer has ART in the exact center, spanning two words. 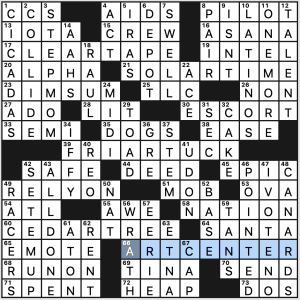 Straightforward and accessible. I admit there wasn’t much here that I found intriguing, but it’s a good, solid theme. Perfect for a new solver.

The nine-letter central entry bisects the grid, so we have corner stacks of sevens rather than any long flashy entries, but I like CICADAS, STEPMOM, LATINOS, “ONE MORE,” “ALL DONE,” “SET ‘EM UP!,” and “I VOTE NO.” Zhouqin always seems to manage to work in fun colloquial phrases, doesn’t she? 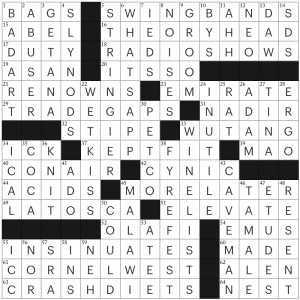 Today we’ve got stacks of 10s in the NE and SW, with some pretty open corners in the NW and SE balancing them out. The stacks, as usual, are pretty excellent, although there’s some fill sprinkled through that I’d be happier without, including some not-so-great partials. The clues are uniformly pretty solid!

The NE stack is SWING BANDS / THEORY HEAD / RADIO SHOWS (the first two sounding like examples of what you might find on the third, if we read RADIO SHOWS broadly to include podcasts). The SW stack is INSINUATES / CORNEL WEST / CRASH DIETS, which are all great entries. I did not know that CORNEL WEST made an appearance in the Matrix movies (the Matrices?)! That’s some fun trivia. Other nice long/longish entries include: FYREFEST [Notorious 2017 scam chronicled in two 2019 documentaries, familiarly], WHATSAPP, WET KISS, WINE LISTS, MORE LATER. Nice!

Alongside these excellent entries were some things I’d rather not see in a puzzle, like ABUSER and IEDS. Some of the short fill also just didn’t reach the high bar set by the New Yorker, like BYS, AS AN, ITS SO, A TEE. Especially this last one— the expression is “to a T,” like the letter T, which I guess we sometimes spell out in crosswords as TEE, but… that didn’t work for me.

Overall, some solid long entries, great clues, and occasionally iffy fill net this one a good chunk of stars from me. See you on Wednesday, March 368.

David Alan Van Houten’s Universal crossword, “Two Be or Not to Be” — pannonica’s write-up 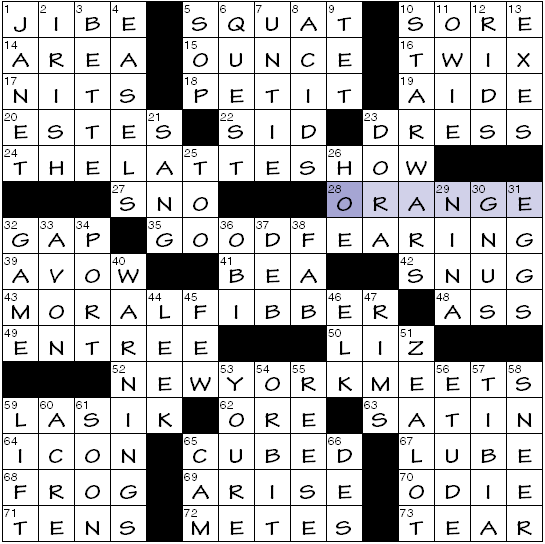 In which letters are doubled to wacky effect.
After completing the grid I looked at the title and said, “hey!” because only one of the themers doubled the B. Took an extra beat, but when I looked at all four sets I realized that they spelled, in order, TO BE. So that solves that.

Am reëxamining the title, and having conniptions trying to parse it fully. Going to throw up my hands and say it works impressionistically.

Quickly, because I have to get back to work:

I had to work a bit at this one. I liked the long entries and could have done without some of the shorter fill. 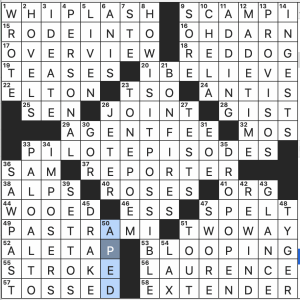 Things I could have done without: I guess it’s really just one thing, now that I look at the grid again. AGENT FEE for [Cost of selling one’s house] is clumsy, at best.

What I didn’t know before I did this puzzle: that RED–DOG is a kind of? another word for? the blitz play in football.