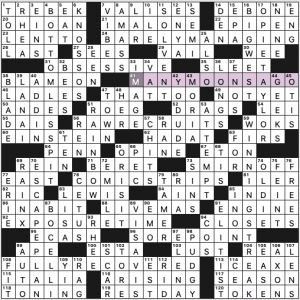 Naked puns are the name of the game:

I liked this theme quite a bit. The phrases are all solid and the thematic clues work.

Overall, the fill was crisp and clean. Highlights include TREBEK and EINSTEIN, OBSESSIVE Ahab, SMIRNOFF, “THAT TOO,” LIVE MÁS, SORE POINT, exercise REST DAY, ESCAPE PLAN, RAINBOW, and a touch of Tolkien in MORIA for those who are so inclined.

4.5 stars from me. It’s a treat to actually enjoy a Sunday puzzle.

Meta for the last day in February! 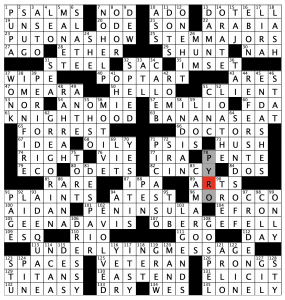 THEME: Something to do with books and authors…

Oddly enough, I figured out the meta before starting the puzzle. The title gave it away for me: I knew I’d be looking for letters underneath whatever was to be hidden in the theme answers. In this case, book titles. Each of the authors noted in the theme clues has a notable book hidden in a common phrase.

If you look at the letters underneath each of those titles, you will have cracked the meta. 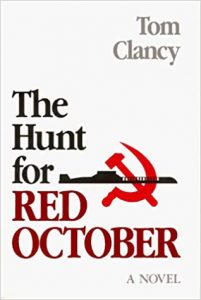 Of course, parsed correctly, that’s THE HUNT FOR RED OCTOBER, the Clancy novel about a submarine. How apt!

I liked the idea for this and the resulting meta, but I struggled with the fill much more than I usually do. My snags include OBERGEFELL (needed every cross), Sheck WES, CALEB McLaughlin, ANNA Friel, and STU Phillips in the names department. I see now that it’s not that many. I don’t know why it felt like there were so many more mid-solve. SHUNT, PUPA, ANOMIE, WONK,  CINCY and PENTE were other areas where I faltered, particularly those last two as I entered NERO instead of PYRO for the clue [Villain of the X-Men who plays with fire]. I don’t know X-Men all that well, and NERO seemed to fit the bill just fine! That made CINCE look like a justifiable nickname for Cincinnati, and NENTE was easily ignored over the correct PENTE.

Also, I was unfamiliar with the texts ASH and NANA. Ironically, I used the Meta answer to figure out those parts of the theme.

I think that cracking the meta so early took a bit of the enjoyment out of the puzzle for me. There wasn’t a growing sense of mystery, and it lacked the AHA moment that I love so much. But I suppose that’s a risk of constructing metas. Solvers are bound to have their AHA moments (or lack thereof) at very different times. That’s okay though. I get excited for them no matter what. So although this one didn’t land as solidly (for me) as have others in the past, it’s still a fine puzzle with a clever execution.

Does the title BB-8 refer to something I’m unfamiliar with? [Googles] Ah! It looks like it’s a Star Wars character. I’m guessing that I’m unfamiliar with that one since BB-8 isn’t a crossword friendly name. I have yet to see any of the films in the franchise. It’s on my list though!

THEME: Eight two-word phrases where both words begin with the letter B. 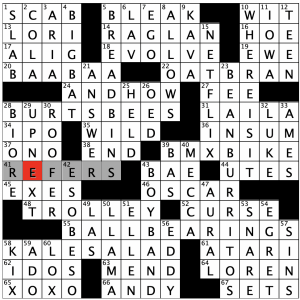 That’s a lot of theme! Which probably accounts for the unusual symmetry of the grid. I thought something felt off during the solve, like the themers didn’t seem to have a consistent placement pattern in the grid, but I figured I’d look more closely post-solve. Weird, eh? I’m not sure there’s any symmetry at all! Though it looks like there is at first glance.

Anyway, a fine solve. I discovered that perhaps I don’t massage my KALE enough, and that’s why I don’t enjoy it.

I was unfamiliar with RAGLAN and BIORE. The RAGLAN/KAVA cross was tricky and I accepted DEFERS as the answer over REFERS. BIODE looked better to me than BIORE. So I had to try a few things when Mr. Happy Pencil didn’t show up.

No real complaints though!

This puzzle is DODGING THE PRESS (117a, [Avoiding journalists’ questions, or what each starred answer is doing?]), but it’s a little tricky to explain. The answers to the theme clues are in the circled squares, and they bend downward at a certain point. The reason for this is because the rest of the numbered entry is a news medium, and the answer is “avoiding” it. The entire numbered entry, including the news medium, comprises its own well-known (though unclued) phrase. 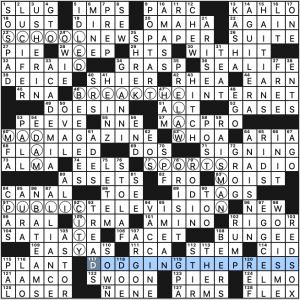 This theme was tough to suss out during the solve, and it must have been a bear to construct. The net effect is a good one, though it took a while to piece together.

Fill highlights: ACADEMIA clued with [“My Hero ___” (anime series)]. I’ve seen this title around, though I’ve never watched a second of the show. Also, fully-named ANAÏS NIN, AGUILERA, LUCIFER, SEALIFE, the BEE GEES, a POP TART, a VACCINE, “WOE IS ME,” and a dramatic “OR IS IT?” Nothing set off the scowl-o-meter that I recall, which is tough to do in a Sunday-sized grid. Well done.

Each theme entry is a phrase containing a music genre.

It’s a perfectly fine theme. The only theme entry I enjoyed was 84a, which is a cute clue. Maybe someday we’ll get a wordplay theme again. Maybe.

What I didn’t know before I did this puzzle: that Bonnie RAITT has won 10 Grammy awards. Here’s one of the songs: