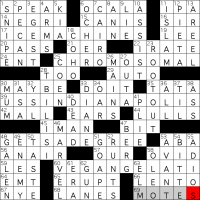 hello and welcome to episode #665 of matt gaffney’s weekly crossword contest, “Stop Talking!”. this was a week 4 puzzle, although matt’s email said the difficulty was more like week 2.5. the instructions tell us that we are looking for a five-letter word. okay, what are the theme answers? there are five long across answers in the grid:

my first instinct was that the title was suggesting that some key words would be cut short by one letter. this turned out to be true, but then i immediately went down a wrong path: i saw that ANGEL was hidden in VEGAN GELATI, and also in a (to my ear, anyway) striking clue: {Belief with angels} ISLAM. why angels, specifically? there are a whole lot of things in islam (as with any religion). but there wasn’t anywhere else to go with this observation, as i couldn’t find anything like it in any of the other theme answers.

then i started thinking about the “talking” part of the title, and decided that it probably had to do with languages. this also turned out to be true… but then i once again immediately went astray, as i saw INDI in USS INDIANAPOLIS and thought, “aha, you could add one letter to make HINDI!” well, you can, but as soon as i started trying to do that with the other theme answers, i saw that the pattern was quite a bit more specific, and in fact HINDI had nothing to do with the meta at all. in fact, each theme answer ends with a language missing its last letter:

the missing letters spell out EIHKN, which is decidedly not a five-letter word (even if you arbitrarily anagram, which you shouldn’t have to anyway), so what else are we missing? as is so often the case in these week 2.5-ish metas, there are extra short answers in the fill that relate to each of these theme answers. in particular, for each of these five languages, there is a famous person in the fill who is a native speaker:

taking the first letters of these five grid entries in this order gives LINGO, an appropriate five-letter answer.

i liked this meta well enough. it’s not especially difficult, as it relies on some fairly familiar mechanisms for medium-difficulty metas, but there was a nice aha moment involving connecting the languages with the people who spoke them. and researching the meta made me look up some things and learn some things i did not previously know: namely, that pola negri was the first european actress signed to a hollywood contract, and that galen wrote in greek.

i think it might have been a little more elegant if we were supposed to somehow use the letters missing from the ends of the languages—this is a tiny thing, perhaps, but maybe the clue for ang LEE could have been rewritten to start with E, for example, as a nod to the E missing from the end of CHINESE. i dunno. but it is a little nitpicky to focus on what the meta isn’t rather than what it is, and what it is is pretty nice.