The title made me think “word ladder,” and yup, I was right. I realize there are a good many people who don’t care for word ladder puzzles, but if you throw in some extra layers, like this puzzle did, then it becomes enjoyable.

The revealer starts at 3d [With 26-Down, how to succeed in business, and a hint to this puzzle]. These turn out to be MAKE YOUR WAY / UP THE LADDER. That feels a little iffy since the word “corporate” is usually in there before “ladder,” but for crossword symmetry purposes, it works well enough. 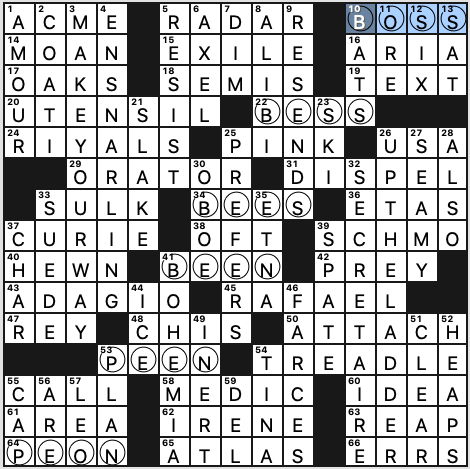 I happened to get the revealer before I got any of the “rungs,” so I made the conscious decision to start in the SW corner. Sure enough, there we find a [Lowly laborer], i.e. a PEON. This becomes PEEN, then BEEN, BEES, BESS, and once we’ve made it to the top, the BOSS [“Large and in charge” person].

You know what—hate on word ladders all you want, but this is just elegant, and I enjoyed each of the layers to this theme, from the PEON climbing up to the BOSS to the visually apt circled words comprising the rungs of a slanted ladder. Super construction job!

On top of all that we get a couple of 10s stacked with the revealer. One is the rather mundane ENSNARLING, but the other is the more interesting SECRETAIRE [Writing desk with a cabinet section]. I tried making SECRETARY work; although it was too short, at least most of the letters matched up. What else is good? TREADLE [Loom part] is a fun word you don’t see every day. ADAGIO, BOHEMIA, and UTENSIL fill out the rest of the list of top fill.

I really enjoyed this puzzle with its tight theme, multiple layers, and expert construction. 4.5 stars. 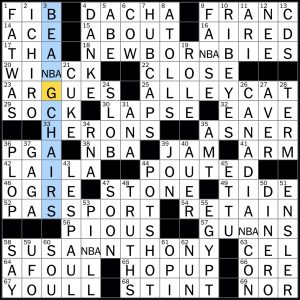 Today’s NYT is a fun riff on classic video game NBA JAM (38A/39A, “Classic sports video game…or a hint to four squares in this puzzle”), and with that as the clue, it’s not too hard to figure out what to do when an answer doesn’t fit in the grid – JAM NBA into one square!:

This was easy to figure out, but had a few curveballs – I was very convinced that HOLLANDAISE was the Eggs Benedict ingredient being looked for. 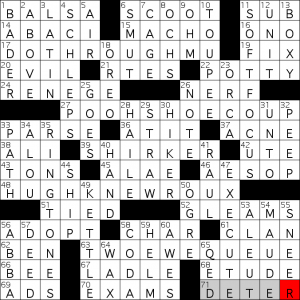 joon here, filling in for jenni this week on the fireball. the theme of pam amick klawitter’s puzzle is twelve (!) different words (well, ten words and a couple of proper names) that rhyme, but all have different spellings of the common ending sound:

this is the kind of theme that’s interesting in the abstract, but not a hugely fun solve, because the theme phrases themselves are neither sensical nor especially amusing. so it was not the most enjoyable solving experience for me, but i enjoyed the post-solve contemplation of the theme somewhat more.

that’s all i’ve got. three and a half stars from me on this puzzle. how’d you like it?

THEME: Common phrases reimagined as if they are retailers. 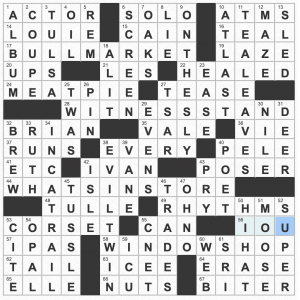 Cute! The WHAT’S IN STORE entry completely changes meaning, unlike WITNESS in WITNESS STAND and WINDOW in WINDOW SHOP, so I think I was drawn to that one for that reason. Also, it’s bonkers, and I like bonkers.

I had unreasonable difficulty parsing INCA TRAIL. I wondered for quite a while what cats had to do with the [Path that leads to Machu Picchu] as I saw IN CAT RAIL.

My favorite blunder was when I went to enter BARF BAG for SCREEN (off the R) for the clue [Seat-back amenity on a plane]. One letter short. And I suppose it doesn’t pass The Breakfast Test. 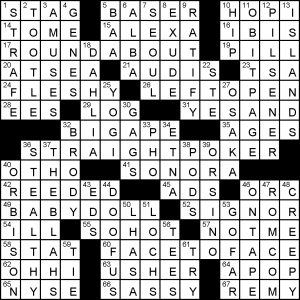 There’s something about “double words that go with” theme entries that makes them stand out even before you get to a revealer. You rarely get particularly interesting entries: of ROUND/ABOUT, LEFT/OPEN, STRAIGHT/POKER (which seems to be poker without any strategy to it), and BABY/DOLL only the last has a little panache to it. And then, when you look at the FACETOFACE faces – all entries have two parts that satisfy “___ FACE” – you see several similar phrases and some slightly odd ones. This is also par for the course. We have left face and about face which are both military and part of a set. A round face is a face that is round?? Openface refers to sandwiches. Straight and poker faces are more idiomatic. And finally a baby face and a doll face are more or less synonyms?

The starting off point in the fill was clearly 11D & 37D: THEBLAHS and OBITPAGE. I’m not sure jokey clues about OBITS are entirely in good taste? I’m also not sure what the connection of YESAND and improv comedy is, but I think there are fans around to explain? [Parental units?] for GENES is a great clue! OSAKA gets an updated clue, although she has now won a bit more than just the [2020 US Open…]