Great to see Joanne’s byline on a meta again! Why she isn’t a regular on the roster is beyond me. This week, she’s asking us to find an eight-letter word. 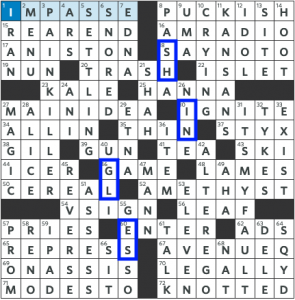 There aren’t what seem to be any stand-out themers, but several pairs of entries have the same clues:

Taking those entries, if we look at their positions in the grid, we see that each entry in the pair “overlaps” with its partner (hence the puzzle’s title), spelling out SH IN GL ES, or SHINGLES, which are things that overlap, and also an eight-letter word and our answer.

This entry was posted in Contests and tagged Joanne M Sullivan, Joanne Sullivan. Bookmark the permalink.