Title: “Moving Target”
Prompt: The meta for this puzzle is a musical supergroup.
Answer: The Traveling Wilburys 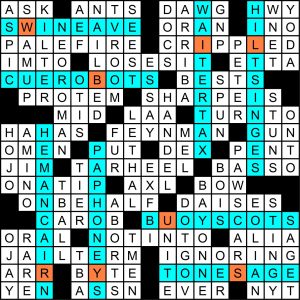 Eight wacky answers in this one, and each seemed somehow close to being a phrase without quite being one. Let’s take a look:

15-A: [Street sign next to the Three Little Pigs’ house?] = SWINE AVE
26-A: [Director’s call for C-3PO and R2-D2?] = CUE ROBOTS
62-A: [Help bagpipe players stay afloat?] = BUOY SCOTS
76-A: [Musician adept at distinguishing micro-intervals?] = TONE SAGE. Not meta-related, but the word “distinguishing” looks and sounds wacky out of context.
10-D: [Fine imposed by restaurant management on slow servers?] = WAITER TAX
12-D: [Marks left on a knight’s sword after slaying a dragon?] = HILT SINGES
40-D: [Pile of rocks dedicated to “Masters of the Universe”?] = HE-MAN CAIRN
45-D: [People from Pickering pretending to be from Pittsburgh?] = PA PHONEYS. Where’s Pickering?

My in for the meta was on BUOY SCOTS, which sounds a lot like “boy scouts.” That was close, but TONE SAGE is where I figured it out fully: you take one letter from these wacky phrases, move it somewhere else in the entry, and a non-wacky phrase appears before you as if by magic. Like so:

In grid order (see diagram) those moved letrers spell WILBURYS, and since those letters “traveled” to form new phrases it’s gotta be the Traveling Wilburys, a.k.a. Jeff Lynne, Bob Dylan, Roy Orbison, Tom Petty and George Harrison, who put out two albums back in the day (both of which I owned on cassette).

I liked this meta quite a lot. I haven’t seen the mechanism before, and Pete’s choice of meta answer gives you that one extra twist to figure out at the end, plus a little grin when you realize that the letters have “traveled” within their entries to deliver the goods. I imagine this one must’ve been a bear to construct, too. Getting WILBURYS in order, among other aspects, looks like no easy task.