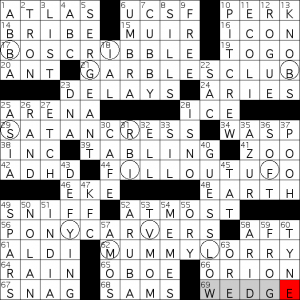 hello and welcome to episode #666 of matt gaffney’s weekly crossword contest, “Play Me or Trade Me”. this was a week 1 puzzle, so i attempted it without the instructions. what are the theme answers? there are six long across answers in the grid, each of them a wacky made-up phrase:

this was unexpectedly difficult for a week 1, in large part because it was far from clear how these silly phrases were generated. however, i did get it after thinking about the title for a little while. although that is a phrase associated with sports—in particular, an athlete who has been benched and then demands a trade—in this context, it suggests games, and i noticed that SCRIBBLE is one letter off from SCRABBLE. indeed, each of the six theme answers is the concatenation of two popular games with a one-letter change:

taking the changed letters in order spells out, appropriately, GAME CHANGERS. i suspect the inability to put either of those words in the title of the puzzle is what gave this puzzle the feel of a mid-month difficulty for me. i presume they’re also not in the instructions either, but let’s check: This week’s contest answer is what those who figure out this meta are. yeah, okay, so that’s not very helpful either until after you’ve figured it out.

still, this was a very nice early-in-the-month meta. one solid aha and then a lot of mini-ahas, leading to a very appropriate and satisfying final answer. and i very much enjoyed the wide range of formats and eras represented among the 12 games used for the theme. maybe a tiny stylistic deduction for the fact that FILL OUT is two words and FALLOUT is only one. but that’s a very slight inconsistency.

the crossword itself i found quite difficult to solve, because so much real estate was taken up by these theme answers that i really didn’t know how to parse until they were almost all there. i certainly tried GOLF instead of CLUB at the end of the second themer, and that slowed me down, too. so did putting down ABEL instead of AMOS for {Biblical shepherd} A___. *shakes fist at matt*

my favorite clue in the puzzle was {NASCAR speedsters} for PIT CREW. that’s … nasty.