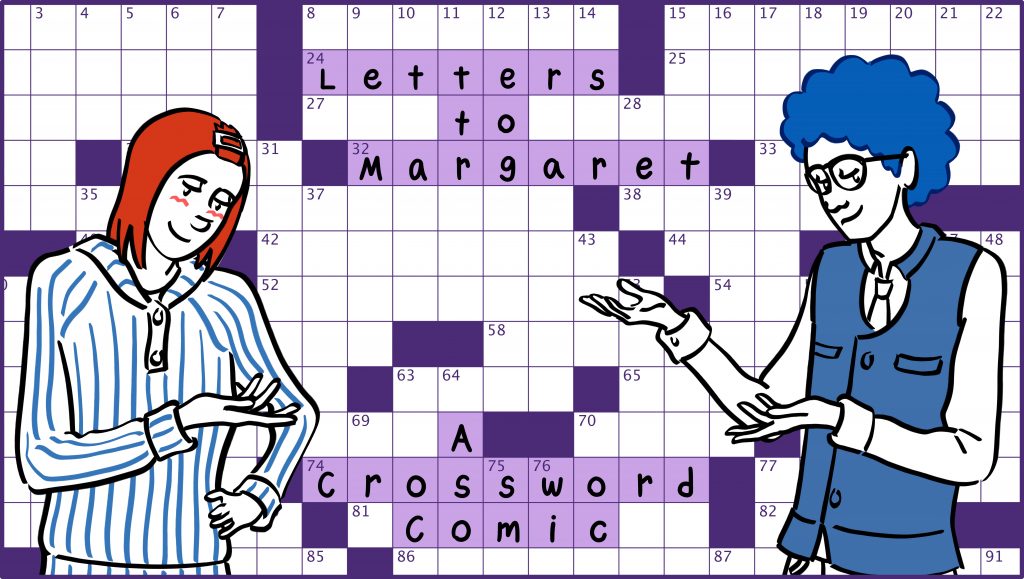 Announcement! There’s a new crossword-related Kickstarter I wanted to let you know about. Hayley Gold, whose “Across and Down” puzzle cartoons you might remember, has created a 128-page graphic novel called Letters to Margaret. The characters include crossword bloggers (!), there’s a Margaret Farrar angle, there’s wit and romance, and the book includes crosswords that are made expressly for the graphic novel (by Andy Kravis and Mike Selinker) and figure into the storyline. Read all about it right here and pledge your support by March 30 to get a print or digital copy of Hayley’s book. I’ve read a draft and thoroughly enjoyed it. If you’ve been hankering for a graphic novel with insider jokes about crosswords, this one’s for you!—Amy

The theme is ANIMAL / RIGHTS (37a, [With 39-Across, PETA focus, and a hint to the theme answers]). The other theme answers are words or phrases that end in an ANIMAL (on the right, get it?) while the first part of those words or phrases comprise a different word. In three out of four entries, this involves re-parsing (i.e. moving the first letter of the second word to the end of the first word). 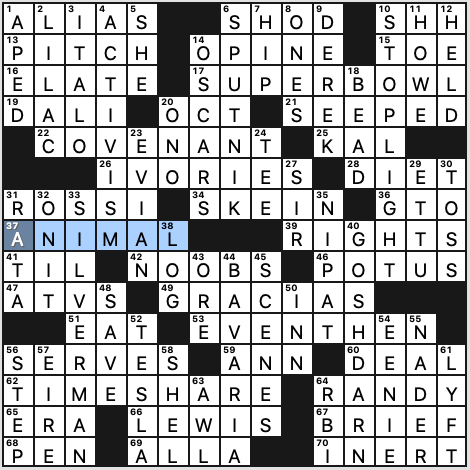 Cute theme. Too bad about the one. If you’re going to have the same mechanism in three of your theme answers, it really would be better if the fourth did the same thing. I found SEXT APES would fit and could lend itself to a humorous clue (no doubt, something with bonobos), but it requires the use of the plural to fit. 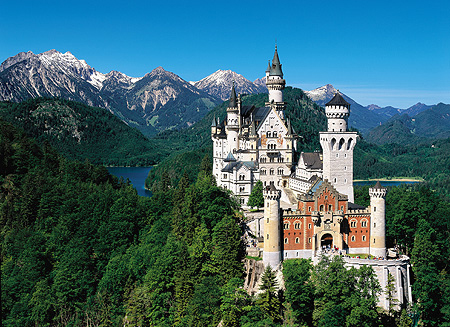 I like the theme though it’s not entirely consistent. Fill is top notch. 3.5 stars. 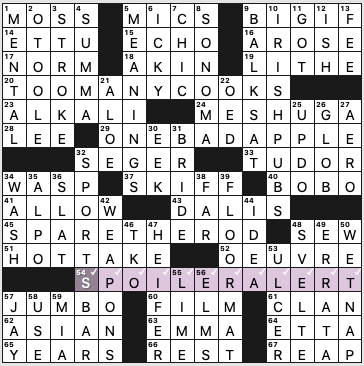 Fun theme! The starts of three familiar old sayings are presented, and the endings that are omitted all kick off with spoil, ergo the SPOILER ALERT revealer, 54a. [Warning you might give before revealing the endings of 20-, 29- and 45-Across?].

The theme feels fresh and unexpected, a neat way to repurpose the phrase SPOILER ALERT.

Fave fill: IRISH PUBS and a SPORTS BAR, MESHUGA (I was proud of myself for remembering the word schmegegge the other day), BIG “IF,” HOT TAKE. Overall, smooth fill throughout. 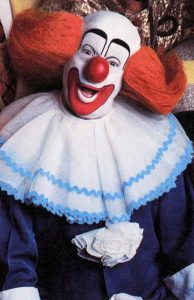 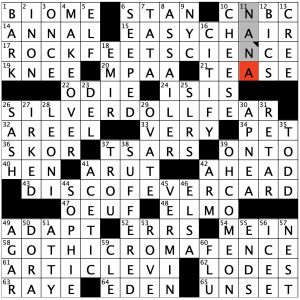 Erin Rhode has today’s AVCX, and as its title suggests, it is ironic, but perhaps not in the way you’d expect:

While all of these clues feel “ironic” in the Alanis Morissette song kind of a way, each clue’s answer is iron-ic in that Fe (the atomic abbreviation for iron) has entered an otherwise normal phrase – ROCKET SCIENCE, SILVER DOLLARS, DISCOVER CARD, and GOTHIC ROMANCE all got a little more ferric.

Erin loves curling, so we got shout-outs to it airing on CNBC, the US team winning gold ONCE (so far), and that its rounds are called ENDS

Gary Cee’s Universal crossword, “It’s Not About You” — pannonica’s write-up 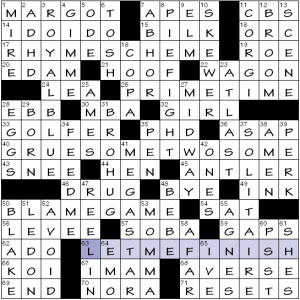 Nothing exciting, but it gets the job done, passes the time pleasantly. Not part of the theme: 4d [Super easy answer] GIMME; 34d [Possible meaning of “Meow!”] FEED ME.

What else have we got going on?

Missed a Photoshop opportunity on the cover. The guy clearly has a right hand there, and I strongly doubt there’s a third one lurking about. 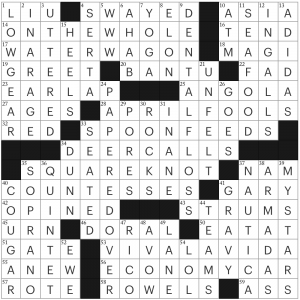 Short writeup today because I have to take a very nauseous dog to the vet and I am worried enough about her that I was not particularly tuned in to the puzzle during this solve. Quick hits! 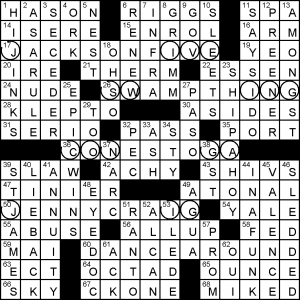 I figured out most of the theme at the easily clued JACKSONFIVE. I went to the revealer anticipating DANCEAROUND and was correct. The dances are JIVE, SWING, CONGA, JIG – do they all have the same degree of specificity?

The design of the grid features big corners. There are quite a few adventurous long answer – EPICWINS, EYEDOC and SHIPAHOY – tempered with other long answers like SECEDER and PREENER as well as copious grit: YEO??/ECT/THERM/SERIO; crossing partials ILEDE and ALLUP. And finally GST – that’s sidereal time in case you’re wondering.