Philip K. Chow makes his NYT debut with this puzzle (and his debut in our tags, so he hasn’t been in the Universal, the LAT, the WSJ, or the indie outlets we cover). It’s a Monday-accessible puzzle even though the theme eluded me until the very end.

The longest answers are the theme answers. 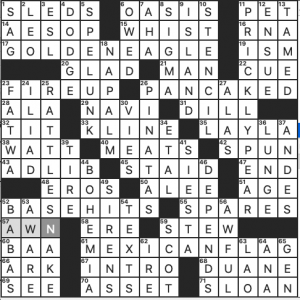 I noticed they were all kind of Southwestern. I was wrong. Well, they are, but that’s a US-centric view. My parochialism became evident when I found the revealer at 61a [Where you can find a 17-Across perched on a 11-Down devouring at 25-Down]: the MEXICAN FLAG. See for yourself. 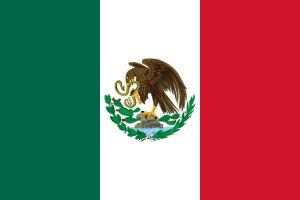 I’m sure I’ve seen the Mexican flag before, and I might have registered that it had a bird. I had no idea of the details. It’s certainly a fresh theme idea! Overall it’s a solid Monday puzzle. The theme may not be obvious but all the entries are clearly clued. A nice debut!

What I didn’t know before I did this puzzle: what’s on the Mexican flag. 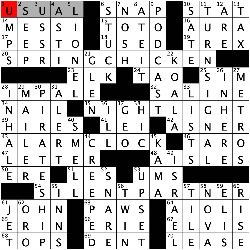 Shhh! This puzzle is all about things that are quiet! Head down to the revealer at 54D [Behind-the-scenes money source … and a hint to the start of 20-, 35-, and 42-Across], which is SILENT PARTNER. I’d quibble that that phrase would lead me to believe that the theme words are words that would “partner” with SILENT in a phrase of the form “SILENT and ___” or “___ and SILENT,” but in fact what’s happening is that the first word in each theme phrase can follow SILENT to form another phrase.

I enjoyed LIONEL crossing MESSI at 5D/14A, and appreciated cluing TWIN with a reference to the Olsens, since there is only one woman mentioned by name in the grid.

Putting it out there: Every time T-REX is in a grid and is not clued as “___ hates push-ups,” it’s a missed opportunity.

“Covert Plots” makes a good title for the Ides of March, eh? Welp, there’s no ET TU in this grid. It’s all about THE SECRET GARDEN (34a, [Frances Hodgson Burnett novel, and a hint to this puzzle’s theme]). I didn’t recognize the author’s name, but I certainly recognize the title. The other theme answers have hidden words that can all precede “garden.” 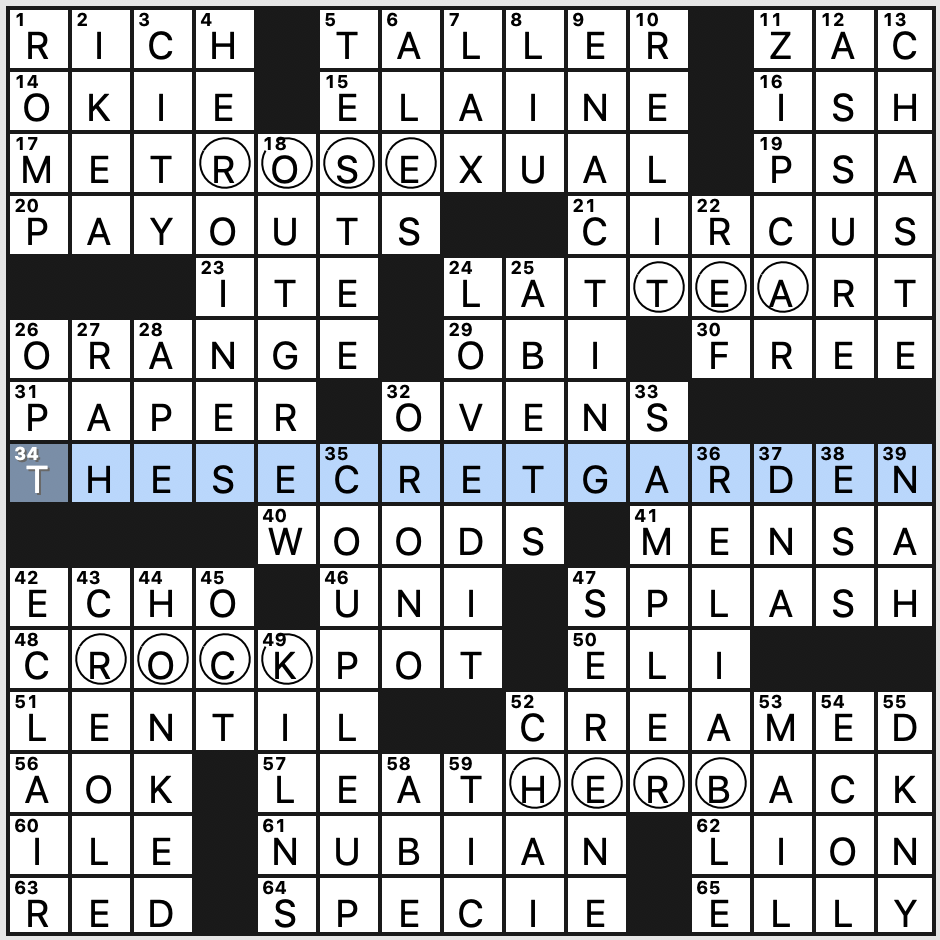 After I sorted the revealer and saw the first entry had ROSE in it, I assumed all the other hidden words would be flowers. That certainly would have been a valid angle for a theme. But this one works just as well and was even a little surprising.

There’s some good stuff in the fill. I’m not going to say I LOVED IT, but I did like HEROINES, a SAMPLER, CREOLE, and ZIPCAR. However, some of the clunkier bits (for a Monday) were noticeable: TESTEE (which never doesn’t sound awkward), ORONO, and uncommon SPECIE [Money in coin form].

A good puzzle. Nothing too flashy, but it gets the week going in the right direction. 3.5 stars. 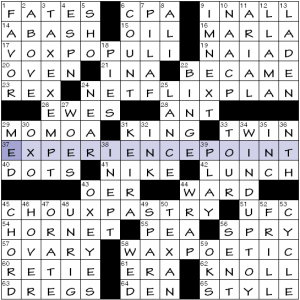 That’s all five, including the revealer itself, which is the only one to not break up the X and P between two words. 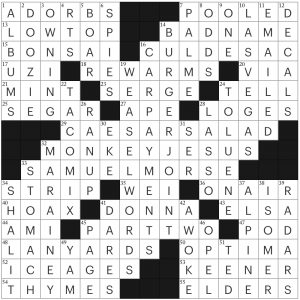 This was definitely on the easier side for me. Quick hits again today, because life is overwhelming and I don’t have time for a deep dive!

Overall, this was a clean, fun, quick solve. Have a good week, folks!

there are a couple of great entries in this puzzle. Overall it’s not my favorite of Brendan’s, which means it was still fun. It’s been a long time since I’ve actively disliked one of his puzzles. I’m not sure I ever have. 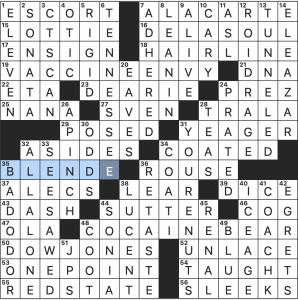 I wasn’t so crazy about the clue for CT SCAN. I’m sure there are some people with claustrophobia who can’t tolerate them, but CT SCANs are usually pretty open. It’s MRI scans that often require sedation and sometimes full anesthesia. I also didn’t like SLEEKS for [Makes shiny and glossy].

What I didn’t know before I did this puzzle: see above re: COCAINE BEAR. I also didn’t know that “3 Feet High and Rising” by DE LA SOUL is in the National Recording Registry, nor that it’s permanently out of print.