Announcement! The American Crossword Puzzle Tournament will be virtual/online this spring, and registration is now open at the ACPT site. The puzzles will be released in an AmuseLabs interface like the one Boswords has been using for its various online crossword tournaments—I think I’m a notch or two slower there than in .puz format, but it’s certainly workable. The virtual ACPT will include via video many of the extra events and games you may know from in-person ACPTs of yore (I reckon you’re on your own for wine and cheese), and follow the customary schedule of fun stuff on Friday and Saturday night, puzzle sessions on Saturday and Sunday, and the finals competition and awards Sunday afternoon. $50 for individuals, $60 for the pairs solving option.

Obligatory reminder to bump your clocks forward an hour before you go to bed Saturday night, Americans! 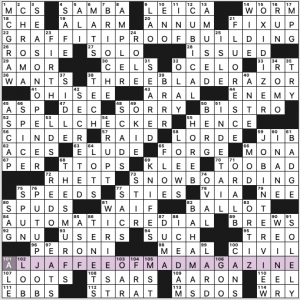 Happy 100th, Al! I was a big Mad fan during my early adolescence, same era when I got hooked on Games magazine.

3.8 stars from me. Enjoy the added daylight on Sunday evening!

It’s Pi Day, but no Pi’s in this grid, just more ads! Each theme answer is a well-known phrase with an added AD somewhere inside.

These work for me, and a couple were pleasantly surprising.

Top bit of fill has to be BEE BEARD! But I so wanted it to be BEQ BEARD. Now I realize the look he’s going for!

It’s March 14, also written 3/14 (at least in the US) and sometimes 3.14, so…..Pi Day! Each theme answer add PI to a base phrase with generally quite amusing results. 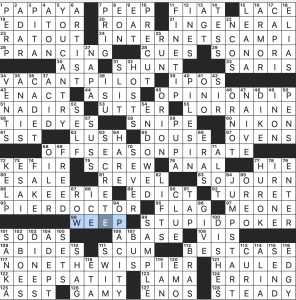 All the base phrases are solid and it’s a funny wordplay theme, so I’m happy. Not so happy with some of the fill. ESALE should take a long walk off a short pier. VIS is clued as [Discernment meas., in meteorology], so I presume it’s short for VISIBILITY. It’s not a great entry in any case and the clue makes it worse. 96d [With 97-Across, words before “good reason”] is GIVE/ME ONE. ME ONE would pretty much have to be a FITB, which is bad enough. Why on earth make it even more tortured with a cross-reference?

What I didn’t know before I did this puzzle: never heard of LEANA WEN, a CNN medical analyst.

Isn’t it fun to open up a WaPo puzzle and see that there’s wackiness before you even start? Actually, don’t answer that. I often forget there’s quite a few solvers who aren’t keen on the wackiness :)

THEME: What’s big is small and what’s small is big. 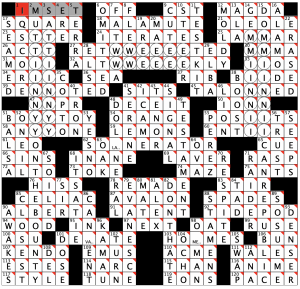 Hard to fully describe, but the words TINY, WEE, and MINI are oversized and make up the answers for MUTINY ON THE BOUNTY, SATINY, RETWEETED ALT WEEKLY, GEMINI, and DOMINICAN REPUBLIC. They are also parts of shorter fill.

The words LARGE, VAST, and MEGA, on the other hand, are quite small, fitting into rebus squares and becoming parts of the entries for DEVASTATE, CANVAS TENT, SOLAR GENERATOR, DOLLAR GENERAL, OMEGA MAN, and HOME GAMES.

Loved this one! Felt very Alice in Wonderland-sy. I initially tried to hack my way through the top of the grid first, since that’s where it appeared the gimmick was, but I found it a little tough up there. I venture to guess it may be more difficult on purpose as to not reveal the gimmick too quickly. The south was easier for me, but I certainly was not expecting rebus squares, so that was fun. As soon as I uncovered LARGE in DOLLAR GENERAL is was a big AHA, and I figured what was going on (with the oversized squares as well). 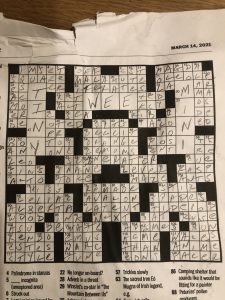 I solved on paper, and very casually, pecking at it here and there over the course of two days when I would pass by the printed out grid laying on my kitchen island. I rarely do that. I kind of enjoyed the lax approach! As a result, I don’t really remember where or when (or if) I was stumped for too long. I just remember some toughness in the north and the usual-for-WaPo unfamiliar names (fairly crossed).

Lots of fun! Thanks for this one :)

Title is a little on the meta side, but pretty standard fare today!

THEME: The word CLUES can be found scrambled in common phrases. 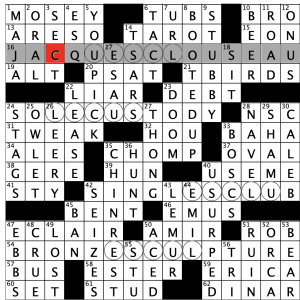 A bit of a late write-up. Apologies! By the way, I can’t find today’s Universal puzzle on the Andrews McMeel website. I wonder why…

We recently had a similar unscramble-the-hidden-word theme, and while I don’t dislike them, I prefer them to be spread out a bit more. BRONZE SCULPTURE felt a little GREEN PAINT-ish to me, and I known them as SINGLES BARS rather than SINGLES CLUBs (fun clue for that one though!)

My favorite mistake was LSAT for PSAT, which led to YOU LICK! for 5D. I assumed it was a phrase I never heard. Or a trend, like perhaps licking one another was a new thing that started amongst friends just before Covid but quickly went the wayside… eew.

Fine puzzle all around.

Oh wait… I almost forgot to complain about the fact that Universal doesn’t offer circles in its publications to the masses. 2 stars without circles because, from what I’ve seen, newer solvers don’t take well to being asked to count and circle their own letters.