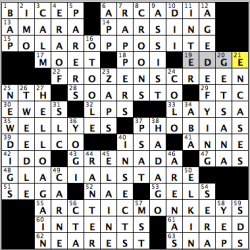 Crossword Nation puzzle solution, Week 511: “Let’s Have a Cold One!”

Good day, everyone! Supposedly, spring is around the corner (and it feels like it in some parts of the country), but enough cold SNAPS have cropped up, including snowstorms in the middle of the country (63A: [Crispy cookies]). Here is hoping those still in the cold are staying warm and safe!

Speaking of the cold, today seems like the perfect day to solve this puzzle given its gelid nature. Was totally hoping that one of the entries would by “CHILLY RECEPTION,” which is so convenient as a 15-worder. Alas, we are still left with these great theme entries. 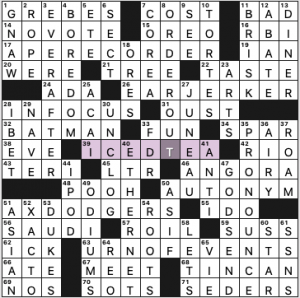 Our refreshing theme revealer is ICED TEA: 39a. [Beverage with a phonetic hint to 17-, 26-, 51- and 63-Across]. In old-timey gangster slang, icing someone is killing them, and here the constructor has killed a “T” (tea) at the start of familiar phrases:

Fair enough. The theme is executed consistently, works all right but the URN, eh.

With that title, I was hoping for something a little more risqué. Instead, we have the revealer PARDON MY / FRENCH (64a, [With 66-Across, phrase that may accompany an oath (and this puzzle)]. The other theme answers are common phrases that came from the French.

The theme answers aren’t marked in any way, but I think I caught all of them: 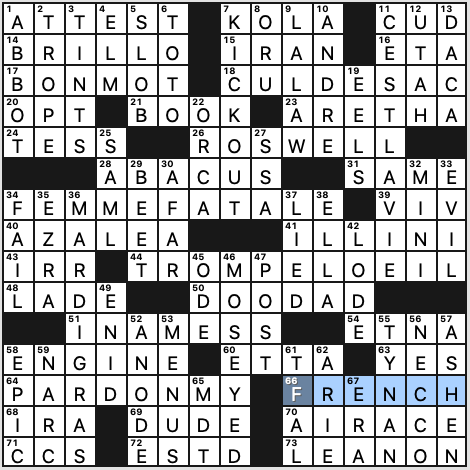 If you don’t like too many foreign-language words in your puzzle, you probably didn’t like this. Me, I would have rather there was some tighter connection between the phrases other than, “These are French phrases.” As you might expect, there are a lot more of them. I am impressed at the number of terms here and the fact that the Down entries cross two Across entries each. Well done.

With all that theme, you shouldn’t be surprised there’s not much flash in the fill. KICK OUT is a good entry, though the clue [Evict] brings to mind people in danger of losing their living arrangements due to the pandemic, and MOSEYED is colorful. ROSWELL, AZALEA, and DOODAD are also nice additions.

A lot of theme in this puzzle, but I wish it was tighter. 3.3 stars.

This puzzle is taking some Zzzzz’s!

THEME: Common phrases have a “Z” sound added to them, and wackiness abounds. 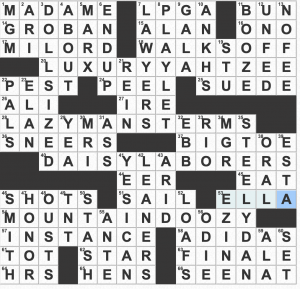 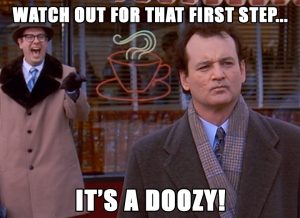 This one is an aural experience. Most of the time, it’s an actual Z being used to create the desired sound, and sometimes the base phrase spelling is altered, but what matters is how it’s heard when it’s said aloud. A DOOZY of an idea! Out of curiosity… does anyone use the word DOOZY outside of trying to sound quaintly old fashioned? I can’t hear that word without picturing Ned Ryerson from Groundhog Day

Fill didn’t excite me too much. DOLL SIZED doesn’t feel like a stand alone. YES I CAN also feels somewhat odd in the same sense. SEEN AT feels like a partial to me. And despite being an avid theatergoer, I’ve never heard the term PLAYLET.

Couldn’t help but think of Piers Morgan when I read the clue for 18A [Departs in a huff, say] WALKS OFF.

Solid theme overall makes up for any fill nits :) 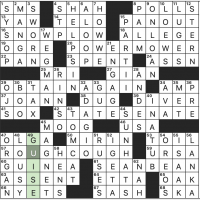 I had to take another look at this puzzle before I figured out what was going on, but the title hints at it quite nicely. I believe the technical term for these are “eye rhymes”:

We have phrases with two words that end with the same letters, but they are pronounced quite differently. Some may argue depending on which accent or drawl they may have, but I believe a check of the phonetic spellings in any dictionary should quell those arguments. Quite a fun puzzle. Apologies for the late post! 4.5 stars. 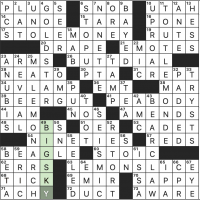 This is another name I am not familiar with. In a normal year, I would say something along the lines of “hope to see you at the ACPT,” but as we all know that is not happening. But we will be having an online event, and I will surely be there!

As for this puzzle, we have a hidden word theme, and a revealer that explains it all:

I hope I got them all! Nicely done, and an easy Tuesday with enough clever entries to make this entertaining. Keep ’em coming, Rebecca! 4.3 stars today.