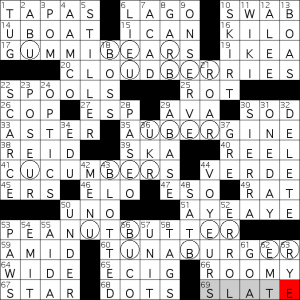 hello and welcome to episode #667 of matt gaffney’s weekly crossword contest, “Search for Apps”. for this week 2 puzzle, the instructions tell us that we are looking for a well-known, two-word app. what are the theme answers? there are six long across answers in the grid:

okay, so first and most obviously, these are all foods, so we’re probably looking for a food-related app. that was actually not the first thing i noticed, though, even though in retrospect it should have been. no, the first thing i noticed was that there seemed to be a lot of U’s. each of the last three entries has two U’s, and the first three each have one. that seemed like a lot. then i noticed the B’s, and, well, i was halfway there. each theme entry contains the letters of UBER in order (though not consecutively, except in the case of AUBERGINE). so the app we’re looking for is uber’s food app, UBER EATS, which, as we all know, is called “overeats” in germany.

congrats to matt on reaching the 2/3 point of the planned 1,000-week MGWCC series. that’s a remarkable milestone, and it’s even more impressive how few of the 667 have been clunkers. this week’s, to cite an example, was nearly the platonic ideal of a week 2 meta: nothing too intricate, but an interesting way to reinterpret the name of an app as a crossword theme, with a bit of subtle concealment. if they’d all been consecutive like in AUBERGINE, it would have been a week 1. as it is, i wonder if AUBERGINE was the way in for many solvers. and i like how “two-word” was in the instructions to make sure people didn’t just submit “uber”.

as a construction feat, the grid’s not too shabby either. both the top and the bottom of the grid feature seven-letter overlap of stacked theme answers, but the fill doesn’t suffer noticeably. the {Choral initialism} SATB might be a little unfamiliar—as a former chorister myself, i’m quite familiar with it (soprano, alto, tenor, bass; SATB is often used as a shorthand for “this piece is in four-part harmony”), but i’m not sure i’ve seen it in a grid before, and it’s doing some work here because not too many things fit into __TB down where PEANUT BUTTER is stacked on TUNA BURGER (which, by the way, is two foods i would not recommend eating together).

fun puzzle, matt! can’t wait to see what’s in store for us the next 333 weeks!