I figured out the theme early on. The revealer was still a surprise. It’s a perfect Monday theme and a solid puzzle overall. 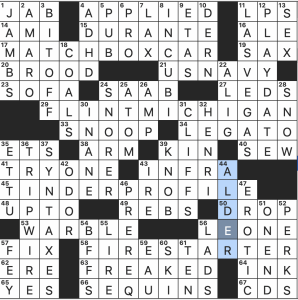 What I didn’t know before I did this puzzle: I actually did not know that GM started in FLINT. 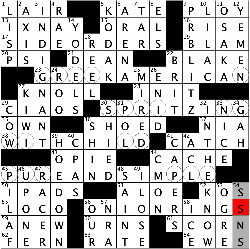 I think I might have beef with this theme. Even though the theme is actually vegan. It’s a little more complicated than the average Monday, enough so that I think this puzzle would’ve been better on Tuesday or Wednesday; note my overall solving time is more consistent with one of those two days. But that’s really more a note to the editor on rating the difficulty here; I’m more not that into the choice of theme entries.

First, what’s going on? The revealer at 56A [Circular fried food … and what’s in the circled letters] is ONION RINGS. And when you look at the circled letters in each of the theme entries, they spell out the name of a type of onion. The circled letters, not coincidentally, are at the beginnings and ends of the phrases; that is, they “ring” the words or phrases.

Here’s my (onion-flavored) beef: IMO, for a theme like this to work well, the phrases that are alluded to by the circled letters need to be well known. GREEN ONIONS and SPRING ONIONS, sure. WILD ONIONS, though, feels a little more like GREEN PAINT than like GREEN ONIONS. PURPLE ONIONS is iffy; I’m much more familiar with them as RED ONIONS, even though they are in fact a purplish red. Google the various onion phrases and you get: GREEN, 8.8 million hits; SPRING, 5.4 million; WILD, 360,000; PURPLE, 939,000. So I think Dr. Google is with me on this one. I admit I can’t think of what theme entries I would have proposed in place of WITH CHILD and PURE AND SIMPLE, alas.

The fill is nice and clean; I liked INDIGNANT, PR BLITZ, HOEDOWN, and PILAF especially.

This puzzle goes from SOUP to NUTS. 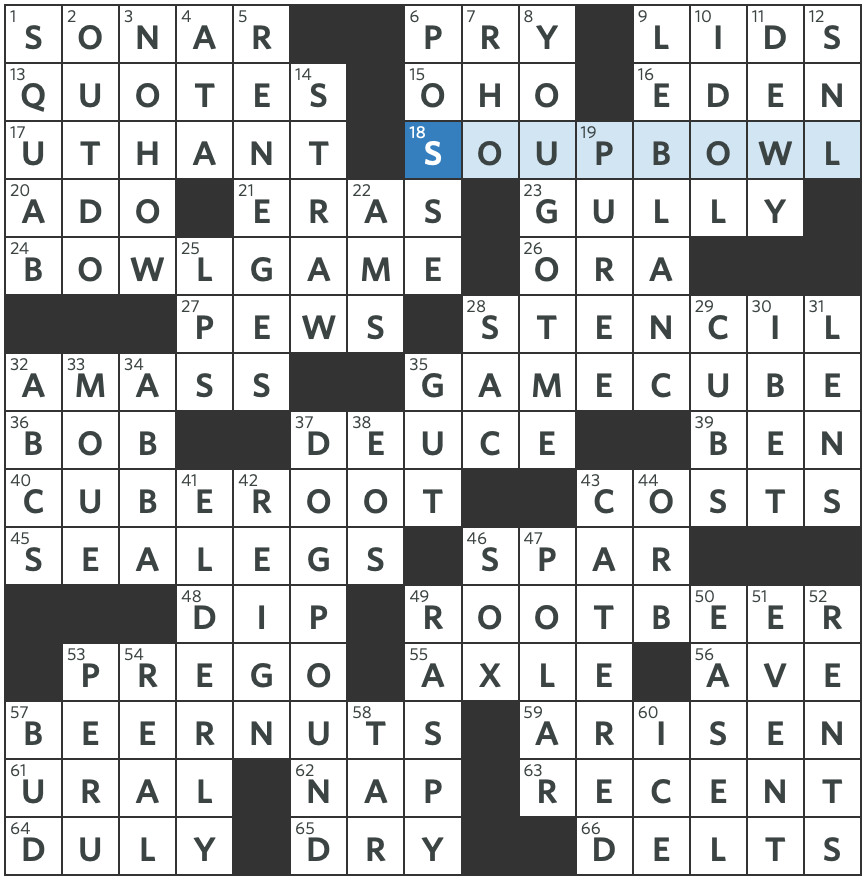 Is there a name for this type of theme. It’s not a word ladder, that name’s taken. Word chain? That name’s also taken. A word chain is a list of related words where the last letter of a word starts the next word. So this is similar to that but with whole words, not just letters. How about a phrase chain? Works for me.

There’s a lot of duplication here, but that seems okay for a Monday when you might have newer solvers. But not all the clues are Monday-level, I’d argue. I’ve never heard of a “black cow” drink, which looks to be a root beer float. The BOWL GAME clue is tricky as well, and the SOUP BOWL clue is a tough one to start with. As far as I know, people usually don’t put stock in their bowls; stock is the basis for a soup, not the finished product.

Other non-Monday things: U THANT, MOUE, EOS, and possibly SQUAB. I do like SEA LEGS, DOG POUND, and “YOU GOT ME.”

I like the theme, especially going from SOUP to NUTS, and it’s fun to say the phrases aloud as you go along, but there were some non-Monday aspects to this that didn’t sit well. 3.3 stars. 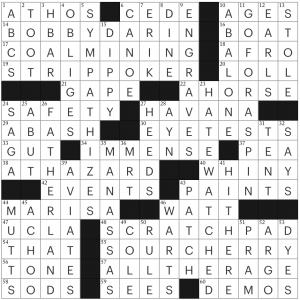 Hello good morning! I have to admit, this is not my favorite Patrick Berry I’ve solved lately. It felt a little stale to me, and there were a few crossings and cluing decisions that left me a little baffled, although there were some solid long entries.

Long entries I liked include STRIP POKER / ALL THE RAGE / HATE WATCHED / GO FOR A SPIN. I particularly like HATE WATCHED [Viewed with disdain?], which feels more contemporary. SYMPATHIZES and FATHERLAND were both perfectly fine entries, although I think the clue for SYMPATHIZES would be more appropriate for EMPATHIZES [Shares feelings?] and FATHERLAND felt to me like it should have been MOTHERLAND [Where one’s ancestors are from]. Other long entries were BOBBY DARIN / COAL MINING / SCRATCH PAD / SOUR CHERRY.

I struggled with the proper nouns today, not realllly knowing BOBBY DARIN or the MR T character Clubber Lang or the [Literary character who was once married to Milady de Winter] (ATHOS). There were also a couple of entries I raised my eyebrow at — specifically DIPPY and H BAR. I’ve seen a lot of construction-materials-named-after-letters in my time as a solver, but I think H BAR is a new one for me. Is it just an I BAR that has been turned on its side? And DIPPY, to me as a Pittsburgher, means “over easy,” as in, “I’d like some DIPPY eggs with my toast, please.” I have never encountered this meaning of DIPPY, and I didn’t know CANOE slalom, so that whole section was pretty tough for me.

Overall, several stars from me.

P.S. If you’d like to solve an easier puzzle, check out today’s USA Today, which is a collaboration between me and Rebecca Goldstein!

A true Torah scholar, which I am not, would have a lot to say about the number of today’s puzzle, since there are purportedly 613 mitzvot (commandments) in the Torah. I’m sure we could come up with some crossword mitzvot if we tried.

This was a fun puzzle! It seemed a smidgen harder than the last couple of BEQ Mondays. Just me? 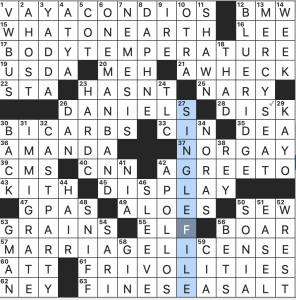 What I didn’t know before I did this puzzle: that there are butterflies called APOLLOS. 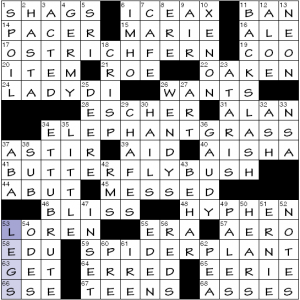 This is a really fine theme.

Nifty, right? Animal names in plant names. And it’s evenly split between two that resemble their namesakes and two that provide nourishment for their eponymous cohorts.

But wait! There’s more: 53d [Body parts that the starred answers’ starts have increasing numbers of] LEGS. That adds a whole other dimension to an already solid theme. 2-4-6-8, much appreciated.

The ballast fill is mostly unremarkable but solid. A few mentions: