There’s just over a week left on Hayley Gold/Lone Shark Games’ Kickstarter for the crossword-laden graphic novel, Letters to Margaret! A whole bunch of stretch goals have already been hit, so there are lots of extras that will go to the backers. The next stretch goal is at $36,000 and it’ll add cartoon crosswords by Patrick Merrell, who is skilled in both puzzle-making and cartooning. I’m looking forward to seeing the finished book and playing with the extras later this year.—Amy 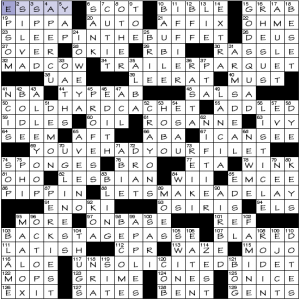 I enjoyed this one from start to finish, a real treat in a Sunday-sized puzzle. The title can be pronounced either “moors” or “morays,” and here we mean the latter. Each themer is made by adding a long A sound, spelled various ways, to the end of a familiar phrase:

Will be brief, as I want to take a Chicagohenge walk and get some neat sunset pictures, so I gotta head out in a minute.

We’re having a warm, sunny weekend here in the Mid-Atlantic and wow, has the weather improved my mood! That plus some post-immunization socializing has me positively giddy. Giddy was a good place to start this puzzle and I shifted to giggly as I solved. The theme answers add “O” to a phrase. Definitely giggle material. I did not giggle about some of the fill. More on that later. 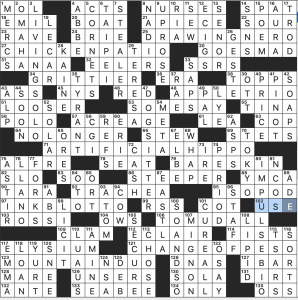 All the base phrases are solid and the theme answers are funny. An easy, cheery Sunday theme.

The fill….I don’t usually notice grid layout, and that tight NW corner caught my eye, and not in a good way. Starting a puzzle with MOL at 1a is not pleasant. I’m sure younger/hipper/more-TV-aware solvers know her, and I guess EMIL Skoda from the late lamented Law&Order series gets us old folks to even the score. Combined with a shortened term for a Ford car line that stopped production in 2011 and a vague geography clue for OMAHA and you have a nasty section. Then there’s the dupe I’ve come to expect from the LAT: [Pricing word] at 21a and PRICE in the grid at 40d. I know some editors don’t care about dupes. This group apparently includes Rich Norris. Dupes bother me because I know the answer and discard it because it’s a duplicate. I still think this is a rule people follow. Guess I need to forget about that except for the editors and puzzlemakers who do follow that rule. Sigh. There’s more fill that raised my eyebrows and I don’t want to look at it again; I’d like to maintain my happy mood.

THEME: Characters from A Midsummer Night’s Dream can be found at the end of names/phrases 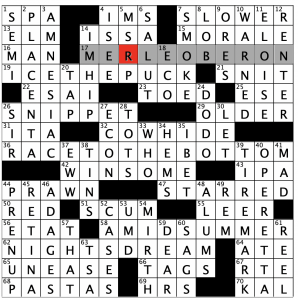 Very impressive to uncover the revealer stacked on itself down in the south. And it didn’t lead to yucky fill at all! A nifty theme, though I will confess that MERLE OBERON and ICE THE PUCK were both out of my wheelhouse. I’m guessing ICE THE PUCK is the same infraction as ICING?

Also, I was positive that the actress the clue was asking for in the clue for 17A was JESSICA ALBA because A) it fits and B) Isn’t she constantly in crosswords with that clue?! As it turns out, the article “The” in the clue makes a big difference. JESSICA ALBA is the star of the TV series Dark Angel, whereas MERLE OBERON is the star of the 1935 film, The Dark Angel. Interesting. I can’t be the only one out there who made that mistake, can I?

While we’re on OBERON, I spelled the last name OBERAN, and I entered ENE for 25A [Detroit-to-Cleveland dir.] instead of ESE because I never ever ever stop to consider the actual geography in those clues. I just guess. But that led to ELAINE (instead of the correct ELOISE) which looked 100% okay. When Mr. Happy Pencil didn’t show I spent twice as long looking for my mistake(s) than I did initially filling the grid.

Ah well. My stumbles didn’t really detract from the enjoyment I got out of the Midsummer’s Night Theme on the first days of spring :)

I solved this without taking the time to grok the theme. If I had spared myself the few seconds to go back to the first two theme answers, I probably would have shaved some time off the bottom of the grid. 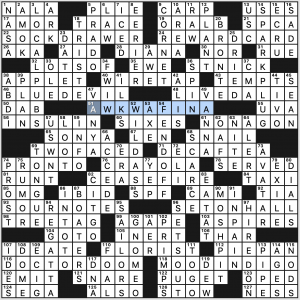 Neat gimmick. It may seem a little odd that the “mirror” only reflects part of each theme answer, but that doesn’t really bother me so much, because trying to find fully-reflecting theme answers is most likely impossible—using in-the-language phrases, that is. You’d have invent theme answers—which has the potential to work—but that’s a whole other theme. (For example, one could do DECAF MOOD [Coffee-drinker’s nighttime feeling?] and DOOM-FACED [Like a person resigned to ruinous fate?] or some such.) 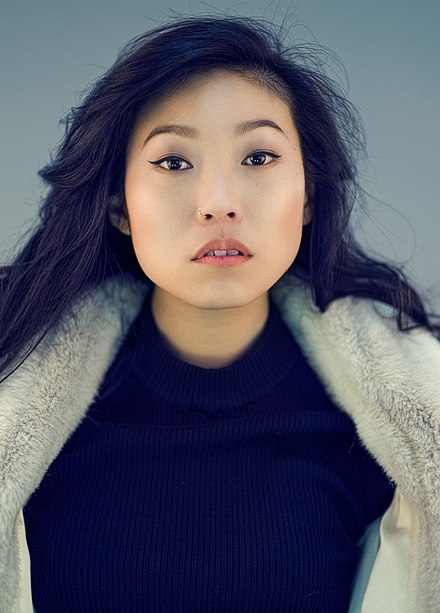 But I like this just fine, and in fact, it must have been a challenge to come up with a workable theme set given word-length constraints and getting everything to fit symmetrically.

A little break from the March Madness of metas and a wacky grid from the past few weeks.

THEME: Common phrases with university names hidden at the end, from which STUDENTs are far removed. 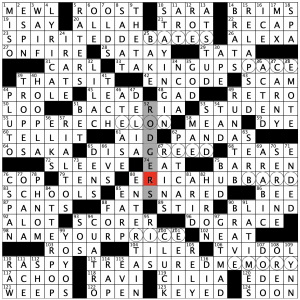 This is a very nice puzzle with excellent finds. Impressive, considering the constraints, that, for the most part, the universities are all quite well known (BATES was the only one unfamiliar to me) and the phrases in which they’re hidden are quite in-language (ERICA HUBBARD was unfamiliar to me, but that falls in line with Evan’s penchant for introducing not-so-familiar names into the grid).

Aside: Before I stray from the topic of new names being introduced in the WaPo puzzles, I find it to be a double-edged sword. I truly appreciate seeing fresh representation in Proper Noun World. However, because I rarely see them again once they’ve been introduced in a WaPo puzzle, their names don’t stick in my memory. And it can be a touch exhausting to come across so many unfamiliar names in a grid knowing that you’ll have to rely on the crosses. Of course, the crosses will be fair, but still, those hiccups can be grating. It would be nice to have a few of them pounded in my memory, which would also provide some  long lasting name recognition… like ERMA Bombeck say, whose columns I read because my curiosity was piqued after seeing her name so frequently in crosswords. So here’s to hoping we see SARA Gruen again (I read and loved Water for Elephants and couldn’t remember her name! For shame!), and perhaps it would be nice to see ALEXA Chung in the future. Or DELIA Owens. Or MAE Jemison. Or LYNN Rajskub. There were others that I stumbled on too, like CARL Reiner, but I know I’ve seen his name in crosswords before, and it is starting to stick despite his work not really being in my wheelhouse.

Well, I hope I didn’t open up any cans of worms there in the comments there. That wasn’t my intention. I certainly do appreciate more inclusive grids, and it is exciting to uncover one you may know that others likely do not… like EVA Cassidy for me not all that long ago. I would just like it if they stayed in my brain for more than a few fleeting moments.

Anyway, back to the puzzle.

The Birnholzian layer was intact here with STUDENT being spelled out, not just as a bonus, but in order to fully grok the theme of Distance Learning. And of course, the wink at the current state of education did not go unnoticed. School is an odd place to work right now, but what’s odder is how quickly we’ve adapted. I have to remind myself often that it’s not normal to be sitting at my desk with a bunch of inanimate Google icons staring back at me on a screen.

I can’t imagine a better way to end a post than with that clip. Good day.