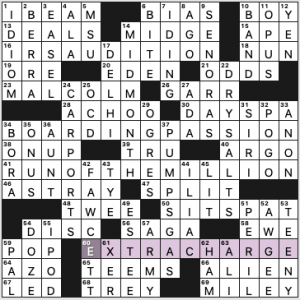 Fun theme. The revealer is 60a. [Unwelcome sight on a bill … or a clue to 16-, 34- and 41-Across], EXTRA CHARGE, and everyone’s favorite charged particle, the ION, is tacked onto familiar phrases to make new goofy phrases that are clueable:

It’s a nice touch that the pre-ION letters are all different. You could easily make this theme with all -TION words and it would be a little less interesting.

March Madness is taking place as we speak, though it’s unlike any other previous NCAA tournament. I don’t really pay attention to it, but I guess that’s why we have a basketball-themed puzzle today.

The revealer is BASKETBALL COURT (58a, [4,700-square-foot play area, and a hint to this puzzle’s theme]). The other theme answers start with an action that occurs in a basketball game. 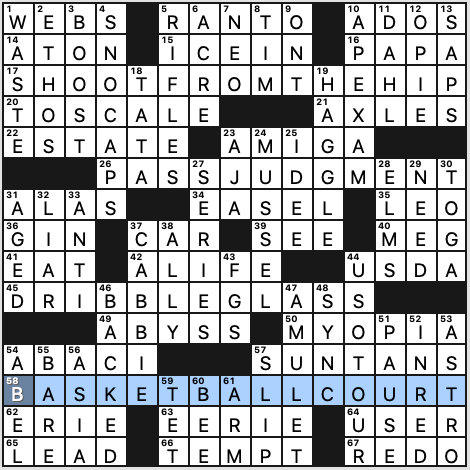 A few things: First, it’s really odd to go from SHOOT to PASS to DRIBBLE. It really should be reversed. Second, this puzzle isn’t about a BASKETBALL COURT, it’s about basketball. A more coherent theme would have FINAL FOUR as the revealer and then the last words of the theme answers would be DRIBBLE, PASS, SHOOT, SCORE (or some such)—though I recognize there’s not a good non-basketball phrase ending in DRIBBLE. A puzzle about a BASKETBALL COURT should have PAINT in it somewhere and HOOP and FREE THROW LINE. Lastly, the title is a pun on the phrase “hardwood floor” with the “four” coming from Final Four, I guess. But it feels like there should be four real theme answers (in addition to the revealer).

Here’s an example of this theme from Matthew Sewell in 2017 in the NYT. It uses the revealer FAST BREAK.

In the fill, there are no showy long entries but some nice 6s: HAGGLE, MYOPIA, MUSSEL, CABBIE. With only four theme answers, it feels like there’s room for some longer entries. I’m not keen on AJA and IDEE, and plural ADOS is always clunky.

This one didn’t work so well for me, and it’s not just because I don’t follow basketball. 2.9 stars. 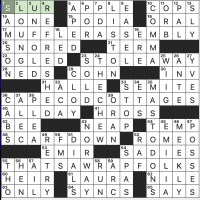 Another byline I don’t recognize this week! I guess I should just accept the fact that I don’t know EVERYONE who does a crossword puzzle! It does seem that way, sometimes, especially after going to a few tournaments. This puzzle has a perfect Tuesday difficulty level:

I am not too pleased with the reminders of cold weather gear, but spring is here anyway, and it is trying desperately to warm up! You can put away your muffler, stole, cape and scarf, at least for now! One thing I DID notice in this puzzle: look at all the references to actresses!

I normally don’t notice things like this, but these caught my eye today. Very nicely done. A solid 4.7 stars from me.

That is all for now! Have to go check my Boswords standings. I am clean but slow through the first four. Here is that song to get stuck in your head this Tuesday: 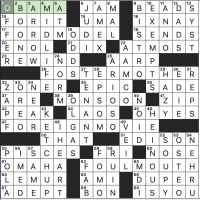 I will admit: it took me a minute to see what the theme here was REALLY doing:

I thought the theme was phrases with the initials FM at first, but we are talking phrases with the pattern FO– MO–. The revealer at 58D helps us to see we are talking about FOMO, or Fear Of Missing Out. This is a common attitude that describes people that are usually glued to their cellphone, specifically social media. Wonderful theme, and timely to boot. There are a couple of books by a man named Cal Newport that deal specifically with these types of digital addictions. In a nutshell, just because we have phones attached to us 24/7 and email instead of regular mail, that doesn’t mean we have to respond to every message constantly. This theme has got me rambling, which means the puzzle was a success! 4.8 stars today. 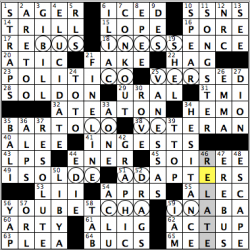 Hello there, everyone! Here is hoping you are all doing well and that your March Madness brackets are somewhat still in tact after the first two rounds. (Because no one asked, I’ll tell you that while my bracket is toast since I picked Illinois, who lost to Loyola Chicago, to win it all, I did nail 11 of the Sweet 16 teams!)

Today’s grid is all about some letter busting, as five different rows in the grid feature a group of circles separated by a single black square and those letters in the circles, when combined, forming a word that is a type of letter.

The middle of the grid had some real fine fill, and the clue for ATE A TON definitely elicited a chuckle (32A: [Took lots of courses?]). Also in that area was the closely-related INGESTS (41A: [Swallows, as food]) and FINE LINE, which I flirt with crossing in a number of situations where fine lines are there to be crossed (21D: [Subtle difference, perhaps]). Liked seeing SAGER in the sense that I can get to know more about a famous person with the surname of Sager than the one I’m most familiar with, the beloved late NBA sideline reporter Craig (1A: [Composer Carole Bayer ___]). Time to head out and, when I drive to my next destination, time to hope that my beloved war horse, a 2002 Ford Taurus, doesn’t CONK OUT on me (7D: [Go kaput]). No guarantees, though!

“Sports will make you smarter” moment of the day: BUCS (64A: [Fla. team that won Super Bowl LV]) – Yes, there are many who are still carping about the Tampa Bay Buccaneers, the Bucs for short, winning Super Bowl LV last month mostly because Tom Brady — and the feelings many have upon the very mentioning of his name — won another freaking Super Bowl. his seventh and first outside of being a member of the New England Patriots. But how about looking at this win from a different lens. The Bucs’ win saw the first team win a Super Bowl with both a black offensive coordinator (Byron Leftwich) and black defensive coordinator (Todd Bowles). The Bucs were also the only team this past season to have two full-time coaches who are female — assistant defensive line coach Lori Locust and assistant strength and conditioning coach Maral Javadifar. Head coach Bruce Arians has always been progressive in his hiring practices in his days as a head coach in the NFL, so it was/is wonderful to see the coaching diversity among the staff of a Super Bowl champion.

THEME: Divisions of time are found in common phrases 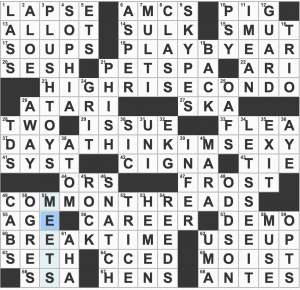 Eh. This one wasn’t for me. That could be due to the fact that I solved on the webapp, which I find somewhat clunky. I also find it extremely frustrating when puzzles that depend on circled letters are run through an app that is incapable of circling the letters. Universal does this quite a bit. The visual element is lost, and I didn’t see the theme until after I was finished because I didn’t want to count letters. It’s been my experience that newer solvers have difficulty with the “count letters” (and mentally circle them yourself) concept. I was told a fix was coming. I believe that was a year ago.

I like the revealer, but again without the visual it’s a bit difficult to appreciate that the words are being “broken” across words.