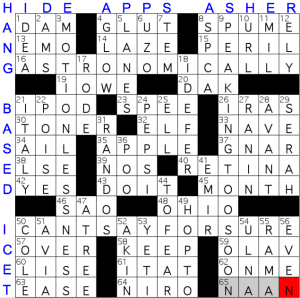 hello and welcome to episode #668 of matt gaffney’s weekly crossword contest, “Asked and Answered”. for this week 3 puzzle, the instructions tell us that we are looking for a six-letter adjective. what are the theme answers? there are four long answers in the grid, interlocking in kind of a hashtag pattern:

interestingly, although these answers span the full grid, they are only 14 letters long. why is this a 14×14 crossword instead of a 15×15? well, it turns out each of these 14-letter answers can be extended into a valid 15-letter entry by prepending one letter (what scrabble players would call a front hook, although only two of the four are valid scrabble words): GASTRONOMICALLY, I CAN’T SAY FOR SURE, EMOTIONLESSNESS, and SPEAKING TOO SOON. what do these four letters have to do with anything? in one case (SPEAKING TOO SOON), the modified entry also fits the clue, but in the other three cases they don’t (unless you think that bottling up your emotions is a good hide and seek tactic).

however, it turns out that these aren’t the only theme answers. in fact, every answer coming off either the top or left edge of the grid is a theme answer, because you can put an entire row above and column to the left of the existing grid (see screenshot) to make valid entries. in many cases, there are multiple possibilities for the front hook letter. how to resolve them? the key is that the new word formed in the extra row/column appears as the first word of a clue somewhere else in the grid. the first one i noticed was APPS, which is in the clue {Apps are sold by them} APPLE. this clue was noticeable to me both because the word order is a little weird and sounded stilted to me, and because last week’s meta had me already thinking about both app(lication)s and app(etizer)s, and i gave some thought to whether we might need to be thinking about APPLE(BEE’S) here for this week’s meta. and i guess apple does sell apps in the sense that they run the app store. but it’s not the first thing i would have thought of, certainly, because all of the apple apps i can think of are actually free in the app store.

anyway, APPS can sit above 4-across to turn GLOW/LANES/UZO/TEM into AGLOW/PLANES/PUZO/STEM. that’s neat. the next one i saw was ASHER (although i thought at first it was AS PER) above 8-across, turning SPCA/PEAKING TOO SOON/URL/MIL/ELY into ASPCA/SPEAKING TOO SOON/HURL/EMIL/RELY. ASHER is the first word of the clue {Asher is her father (and an anagram of her name), in the Bible} SERAH, which, wow. that is a biblical figure i have never heard of, although my daughter is named SARAH. i presume this is the asher who’s one of the sons of jacob? anyway, the word order in this clue was also unnatural-sounding, so it was not hard to pick it out.

after that i got a little bit stuck. it looked like 1-across needed to have a three-letter word on top of it, and since 1d is DEA, i figured that would have to start with an I (or maybe O, although ODEA is more than a little crosswordese-y). i noticed the clue {Ice-T song “Somebody Gotta ___”} DO IT, again with a word order different from the natural-sounding {“Somebody Gotta ___” (Ice-T song)}. and ICE does work up there, turning AMS into CAMS and MOTIONLESSNESS into EMOTIONLESSNESS. but i didn’t feel great about just taking ICE from ice-t.

the next tipoff for me was the entry {Alma mater of George Soros, Cherie Blair, and Tsai Ing-wen, for short} LSE, which i mindlessly filled in as LSU while solving the crossword before fixing it with the crossing e from MOTIONLESSNESS. this isn’t louisiana state; it’s the london school of economics. (cherie blair, the spouse of former PM tony blair, is the only one of those three alumni who’s english, but of course, the LSE draws students from around the globe.) LSE is an unusual crossword entry, but it nicely takes a front hook of E to make ELSE. so i realized that not only were we getting a new top row, we were also getting a new left column. BASED has to go to the left of 21-down to turn IPOD/TONER/AIL/LSE/YES into BIPOD/ATONER/SAIL/ELSE/DYES. and it’s also the first word of the clue {Based on fairness} EVEN, which … i guess it works, but it’s not really as precise as you’d expect a crossword clue to be.

going down to the next block next to 50-down, this is where i realized that ICE-T belongs (and not just the ICE part of it), turning CAN’T SAY FOR SURE/OVER/LISE/EASE into I CAN’T SAY FOR SURE/COVER/ELISE/TEASE. great. but then what’s happening with 1-across and 1-down? i couldn’t find three-letter words starting clues that worked there. so even though i knew i was on the right track, i had to put the puzzle aside for a couple of days because i had reached a dead end.

picking it up again, i realized right away that i had to be looking for four-letter words, not three, to actually complete the puzzle and turn it into a (symmetric) 15×15 grid. i’m a little embarrassed that i hadn’t noticed before that the grid’s symmetry was a little wonky. so i knew there had to be a _I_E word above 1-across and a ___G word to the left of 1-down, and i found them. in fact, i had already found one of them, the HIDE of {Hide and seek player’s tactic}. i thought it was a little funny to turn AMS into DAMS when 1-across was already DAM, but of course, 1-across isn’t really DAM at all—it’s ADAM, because HANG is over there to the left, turning DAM into ADAM (as well as EMO into NEMO and ASTRONOMICALLY into GASTRONOMICALLY).

whew. what’s the meta answer, anyway? now that we’ve found all six extra entries outside the grid, we just take the first letters of the answers to the six clues that start with those words:

that gives us the six-letter adjective MASKED, which these entries certainly were. as an amusing extra tidbit, five sixths of the answer was staring us in the face from the puzzle title this whole time, with its own missing front hook.

i thought this meta was quite brilliant, and i’m somewhat chagrined to have made it harder than it needed to be by just not noticing the asymmetry. that said, the final aha of realizing there had to be another doubly-hidden square in the upper left was quite satisfying.

(speaking of brilliant and satisfying metas, the great patrick berry has a new variety puzzle extravaganza called containment policy available from his website. it’s $15, with a third of proceeds going to covid relief. if you haven’t gotten these puzzles yet, do yourself a favor and just click the link.)

the fill in this puzzle was nothing to write home about; a couple more partials than i usually prefer seeing, including (somewhat surprisingly, at least to me) a pair of six-letter partials, I DEFER and TO FEAR. on the other hand, i was entertained by the freshness (in multiple senses) of {People you don’t even know who weirdly try to interact with you} RANDOS and the clue {“Is ___ OK?”} PEPSI. (fittingly, the last intersects {Rejecting words} NOS at the S.)

that’s all i’ve got this week! how’d you all like this one?