I enjoy both Aimee’s and Ella’s puzzles, so I was delighted to see their names pop up on this one. And it’s a baseball theme! Even better! I don’t even mind the circles. Let’s look  the theme answers: 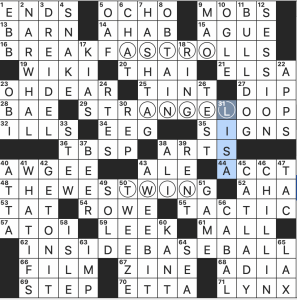 And the revealer: 62a [Sports metaphor used to describe esoteric knowledge…with a hint to the circled letters] is INSIDE BASEBALL. ASTRO, ANGEL, TWIN – all baseball players. Nice, consistent, enjoyable theme, with my one quibble noted above. 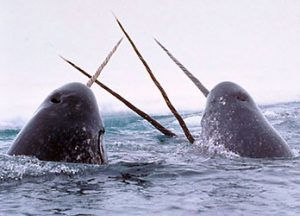 What I didn’t know before I did this puzzle: that LISA Simpson is a Buddhist and a vegetarian. Everything I know about the Simpsons, I learned from crosswords. 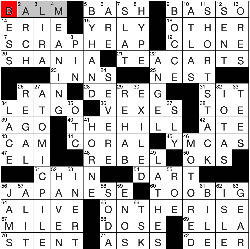 I feel like I’ve been saying “this puzzle would have been better without a revealer” a lot lately, which won’t stop me from saying it again this time. Said revealer is at 65A [Increasing, and a hint to 17- and 40-Across and 11- and 27-Down]: ON THE RISE.

Boy, is that a mouthful of a clue, not helped by the pinwheel grid, which necessitates the awkward mention of both Across and Down entries in the clue. Though I suppose an easy fix for that would’ve been to asterisk the theme entries and refer to “starred entries” instead. Anyway, ON THE RISE refers to each theme entry having some kind of a “rise” as the second word in a two-word phrase.

…okay, I guess Merriam-Webster defines RISE in its noun sense as “a spot higher than surrounding ground : hilltop,” but I think the second definition listed, “an upward slope,” is the more familiar one. A STACK can be a pile with vertical sides (and in fact, a SHORT STACK of pancakes does have more or less vertical sides); I would say PILE falls into that category too. I’d rather have left this as a group of four pile-y things without trying to gather them together under a revealer that doesn’t quite fit all of them.

I do appreciate the number of women mentioned by name: SHANIA Twain, BESS of Porgy and Bess, Lena HORNE, ELLA of Ella Enchanted, Mireille ENOS.

Theme: RAIL SPLITTING (38a, [Activity performed by young Abe Lincoln, and a clue to the starred answers]). Each of the other theme answers has some combination of the letters RAIL beginning and ending the entry. 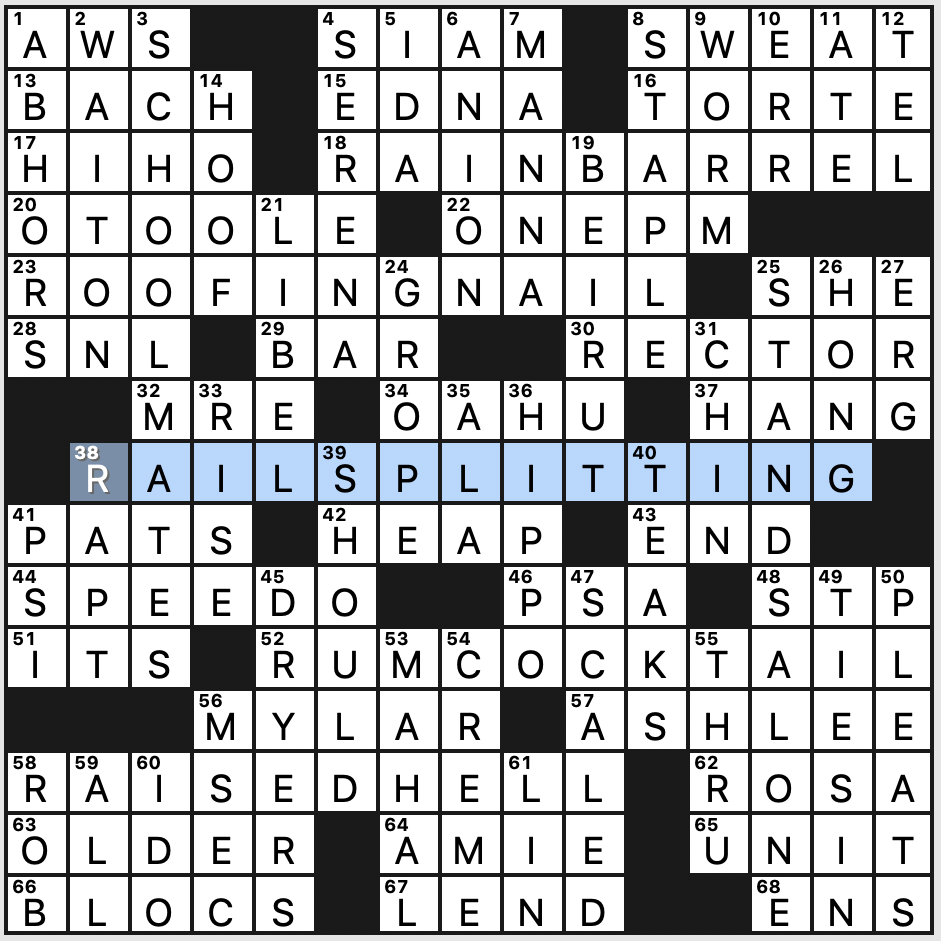 So we have two R-AILs, two RAI-Ls, and no RA-ILs. I appreciate the symmetry in the choice of entries and in the placement.

I didn’t remember that Lincoln had the nickname “Railsplitter,” but that’s on me. Apparently when he was running for the 1860 election, the Republican Party was bored with the “Honest Abe” epithet and wanted something more lively. They hit on the fact that Lincoln was a backwoodsman in his youth and was handy with an axe. You can read more about it here.

By the way, the rails in question have nothing to do with railroads, but are pieces of timber used to build a split-rail fence.

I was going to ding the puzzle for a really generic title, but it made more sense after reading about Lincoln. Still, I think it would be even stronger if it signaled having something to do with chopping up wood. How about “Chopped Up”?

Looking at the fill, having the awkward AWS at 1a is not a strong beginning, and there are a number of words I only see in crosswords: AMIE, ANION, ERG, and MSEC (but not MRE; I see MREs on occasion when I visit the commissary on base). But there are bright spots like SCHOOLMATES and STANDS ALONE as well as HIPPO and MYLAR balloons (those shiny balloons that seem to last forever).

In the end, the theme is solid and the fill is sound. 3.5 stars. 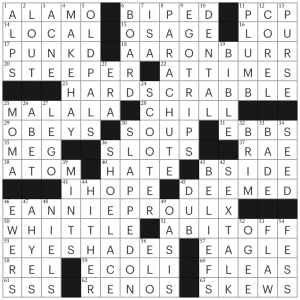 Happy Monday, all! I enjoyed parts of this solve, but on the whole I think the overall experience was somewhat marred by some less-than-stellar fill. Additionally, the long entries being 12s constrains the grid such that there can’t be all that many other long entries, so it felt like a lot of medium-length stuff with no huge payoff (although looking back, there are still 7 other entries 8 letters or longer).

The long entries today are HARDSCRABBLE and E. ANNIE PROULX. HARDSCABBLE is a fun word–  I remember thinking when I was a kid that HARDSCRABBLE was derived from a HARD game of SCRABBLE because, in my experience, SCRABBLE was HARD, which in retrospect is hilarious. E. ANNIE PROULX was unknown to me, and although the clue suggested that there was an initial at the start, I still ended up with EONNIE PROULX, guessing that EONNIE was maybe a Celtic name of some sort, having entered OH YES for [“But of course!”] instead of AH YES without really thinking about it. This error took me about a minute to hunt down. Other longer stuff today: SHOELACE / SLAPPED ON / PARACHUTE / EGO TRIPS / AARON BURR / EYE SHADES. Not bad!

PS. “These Puzzles Fund Abortion” is now out in the wild! You can still order your copy here by donating to the Baltimore Abortion Fund. Thanks for supporting equitable access to a necessary health service!!! 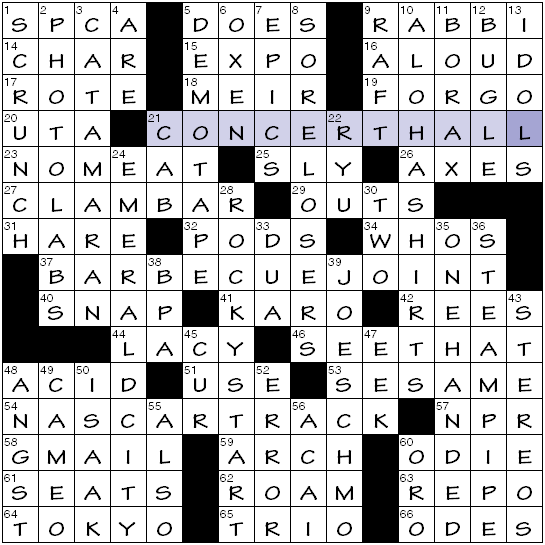 Three long across answers share the same clue – [Where to find a pit boss?] – and that’s the whole theme. Modest but solid for a Monday.

Fine theme, but I for one am sensing a notable absence, that of an additional locale: casino. With that 13-letter central entry it would have been unworkable with all acrosses, and also unworkable with four in a pinwheel-type arrangement. So I’m left wondering if CONCERT HALL—the weakest of the bunch—was originally intended to be CASINO FLOOR.

So, with only three moderately-long theme answers, there’s plenty of space and flexibility in the grid for long entries elsewhere and indeed we’re treated to quite a lot of downs like that: two 11s, two 10s, pairs of stacked 9s. ALOHA SHIRTS, EMERALD CITY, SORE LOSERS, ROCKY START, PHOTO LABS | CATAMARAN, ONE-HANDED | STEAM PIPE. Oh, plus a couple of 8s: DEMO TAPE and JOE SCHMO. All of these are nice and juicy. 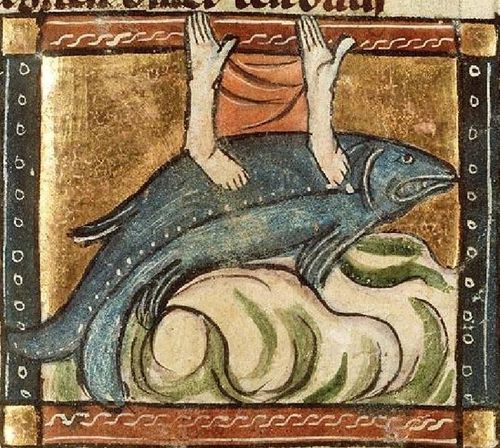 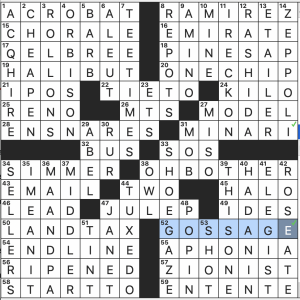 Nearly Naticked in the NW at the crossing of 1d [Portmanteau for a corporate takeover aimed at gaining the purchased company’s employees (it would score you 21 points in Scrabble)] and 17a [ADHD drug made by Supernus]. The answers are ACQHIRE and QELBREE, respectively, and the Q was an inference from 1d. When I finished the puzzle and didn’t get Mr Happy Pencil, I figured that was my mistake. Nope. My actual Natick was the crossing of 14d [Italian treat made of fried dough covered with powdered sugar: Var.] and 31a [2021 Best Picture nominee whose name translates to “water celery”]: ZEPPOLI and MINARI. This also constitutes “what I didn’t know before I did this puzzle,” and now I want fried dough.