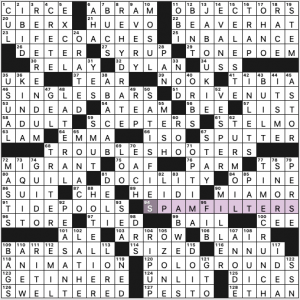 I enjoyed this puzzle. I liked the theme, and there was so much good stuff scattered throughout the grid, like IDA B. WELLS, JABOUKIE Young-White (I’ve followed him on Twitter and appreciate that his first name is supervocalic—uses each of the vowels exactly once), CELESTE Ng. Non-people fill like UBER-X, REHYDRATE, ABACAB, TIME CRUNCH, the UNDEAD wights—I liked that, too.

Here’s the theme, where two companies “merge” by having a product from each of them combine to form a familiar phrase:

Just six more things, because my family’s waiting for me:

They sneak up on you, don’t they? Just when you start to forget that WaPo dabbles in themeless 21x puzzles, Whoomp! There it is.

There was a lot to like, as there darn well should be in a jumbo themeless! 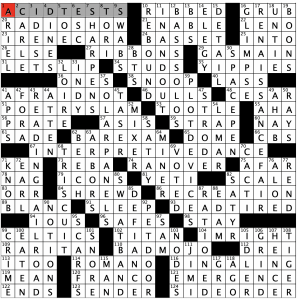 Favorites for me included:

I was hoping for some more colorful answers that would never fit into a normal 15x grid as well.

Other than that, very enjoyable!

Jacob Stulberg’s Universal Sunday crossword, “Whose Side Are You On?”—Jim P’s review

Our theme consists of protagonists paired with one of their antagonists while one of their usual buddies is off to the side by their lonesome (clued as someone else).

This is all explained by the phrase KEEP YOUR FRIENDS CLOSE / AND YOUR ENEMIES CLOSER (67a, [With 75-Across, interpersonal advice depicted four times in this puzzle?]). 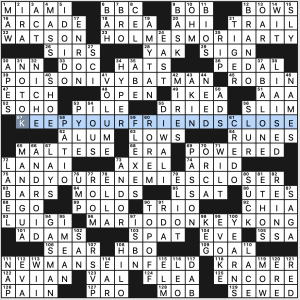 I love the the theme revealer in this one. Learning that the phrase can be split into two 20-letter segments at just the right spot is an amazing find. That said, I’m not sure about the implementation of the theme with protagonist and antagonist smushed together yielding an entry that doesn’t make much sense on its own. I got used to it easily enough, but it just feels odd, especially in those cases where the antagonism isn’t as iconic. 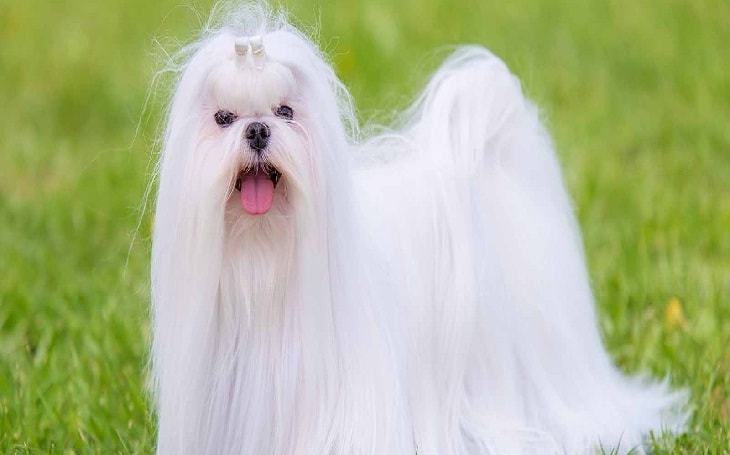 There’s a ton of theme material in this grid, so there’s little long fill to speak of—just a handful of 7s. But MALTESE, MANAGUA, ANDROID, and ABALONE are all nice, though I don’t know what a MALTESE dog looks like. Oh, there’s one.

Still not sure how I feel about this one. It works for the most part, but it’s just odd. 3.4 stars.

Circles. Why did it have to be circles? Well, it had to be circles because the theme answers begin and end with the same four letters, so there you go. I thought that was the whole theme until I got to the revealer at the end, which at least didn’t have circles. The whole thing made me sorta grumpy. I like a little wordplay in my puzzles, especially on Sunday. This is more “hey! I found five phrases that begin and end with the same four letters! And I can make them symmetrical!” It’s one of those things constructors notice about language, and I’m sure it’s a feat of construction (maybe. Not a constructor). Doesn’t make it any more fun to solve. The theme answers are clued straight and we know which ones they are by the circles. Which is where I started this paragraph, so let’s get on with it, shall we? 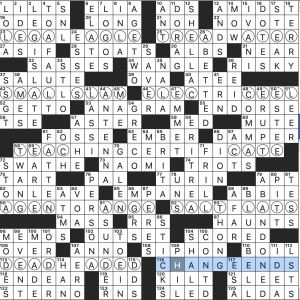 And the revealer: 116a [Tennis umpire’s order after odd-numbered games….and a hint to the two sets of circled letters in each of eight answers]. It’s CHANGE ENDS. I don’t think we really needed a hint, did we? A confirmed “meh” from me on the theme.

What I didn’t know before I did this puzzle: that ABBIE Cornish appeared in “Three Billboards Outside Ebbing, Missouri.”