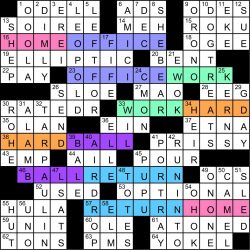 Good day, everybody! Those April showers are really pouring here in the Northeast at the moment, and here is hoping the rest of you are doing well and staying dry.

It has been a long, long while since I’ve seen ROHE (30D: [Architect Ludwig Mies van der ___]) in the grid, and thank goodness that lot of crosswords that I started with years ago had that entry appear regularly because OLAN was definitely not going to come to me without the crossings (35D: [“The Good Earth” heroine]). It took me a while from the first time I ever watched a baseball game and heard broadcasters talking about rain delays to put together that “tarp” was short for TARPAULIN (32D: [Waterproof cloth that protects a boat in storage]). Speaking of trying to understand origins of words when a kid, the only thing that entered my mind when seeing PRISSY was the name of the hen alongside Foghorn Leghorn in a number of Looney Tunes cartoons (41A: [Way too prim and proper]). 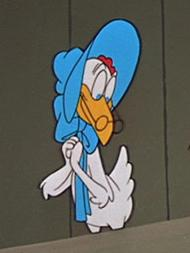 “Sports will make you smarter” moment of the day: SHEP (13D: [CNBC news anchor Smith]) – During the mid 1970s, the North American Soccer League helped to increase the popularity and interest of soccer in American when it acquired some of the biggest international stars in the world, with the New York Cosmos ending up with footballing legends such as Pelé, Franz Beckenbauer and Giorgio Chinaglia. The Cosmos’ goalkeeper during that time was a man named Shep Messing, who was in goal for the Cosmos when it won the 1977 Soccer Bowl (NASL Championship game). Messing, who in 1977 became the highest-paid American in the league, has spent the last couple of decades as a television soccer analyst and currently works as the color commentator during New York Red Bulls games on the MSG Network. 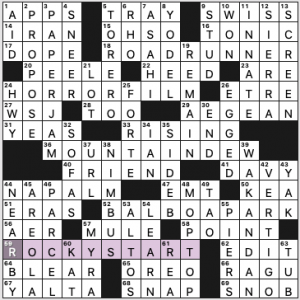 Decent theme, fresh, but not perfectly executed with that single mountain.

Today’s theme answers have strings of circled letters so it would make sense to assume they clue us in to hidden words. And when you resolve the first entry, it seems to bear this out with the hidden word KEEP. But that’s just coincidence.

The real theme is hinted at by 62a LOOK THE OTHER WAY [Pretend not to notice, and a hint to this puzzle’s circled words]. The circled letters do indeed spell words, but going backwards (KEEP is actually PEEK). Each circled word is a synonym of LOOK. 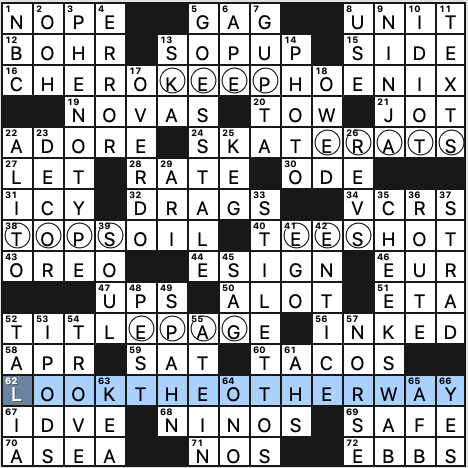 Nice theme. It’s got a strong revealer and the entry choices work well; I especially like the first two.

Did not know pitcher Warren SPAHN. That P crosses with the thematic GAPE which I had first thought might be GAZE. SZAHN seemed believable. Fortunately, the theme answer TITLE PAGE set me straight.

All around good theme and grid. 3.8 stars.

Oh boy. Letter counting in the Universal theme today. My least favorite thing to do in a crossword. I haven’t even figured out the theme yet. I figured I’d kill two birds and suss it out during this write-up.

THEME: Don’t know yet since I haven’t counted the letters to the themers (I solved in the web app). 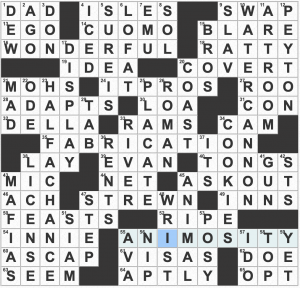 Ugh. If you think I’m exaggerating my solve experience in how I typed it out above, I assure you it’s under-exaggerated. This is a Puzzle. That. Needs. Circles. I would’ve seen the theme at the time I was supposed to have seen it, not post-solve. I would’ve enjoyed it. Instead, it’s a chore. I don’t understand why Universal, the same puzzle that per its own website says that it “…sets the standard for all daily crosswords” cannot achieve the standard of including circles in its grid when necessary. That has been a standard for a very, very long time in crosswords.

This is a 4.5 star puzzle from a fantastic constructor transformed into a 1 star puzzle. Solvers should not be offered two different solving experiences (solve the way it is published in print or in its web applet, or solve by clicking the Across Lite link on this very website), especially when the bulk of solvers have no idea that Across Lite exists and a link can be found on a subpage of a crossword blog. I just don’t understand how that is acceptable.

Sorry, Paul. It’s not on you. Great idea. Awesome finds. I don’t have anything else to say. 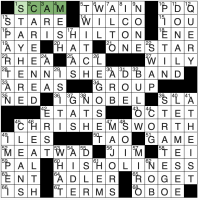 I “sorta” didn’t understand this theme at first, but then it clearly made sense. Kinda sorta:

I am only kidding! Nicely done, although not overly complex. It is nice that the theme letters all cross a word gap, so it isn’t easily seen and none of them have the actual “ish” sound in them. I think I like it! 4.4 stars today. 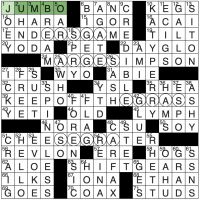 Cleanly done. The revealer at the end ties it together nicely. This is one of the few times I feel like this theme has been done before, but that’s ok: this is a fresh take on it at the very least. I have not read 17A, nor seen the movie (there is a movie, right?), but I would love to do either.