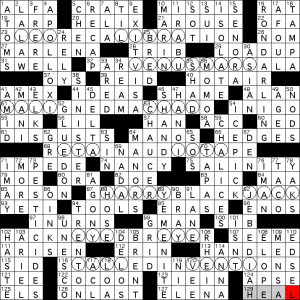 hello and welcome to episode #671 of matt gaffney’s weekly crossword contest, “This Stays Between Us”. for this week 2 puzzle, the instructions tells us that the answer is a kind of talk that’s best kept private. okay. what are the theme answers? this 21×21 grid includes seven wacky long across entries:

so what’s going on with the theme? each of these wacky answers is a two-word phrase in which each word contains a hidden word or name, and both hiddens are part of a canonical set, with (as the title hints) one thing between them:

taking the first letters of the in-between term in each of these spells out VENTING, which is the meta answer. (it’s a little curious how similar it is to the unrelated word VENTI, part of the last themer.)

this is a very nice week 2 meta—one big aha followed by several little ahas, and i enjoyed the different senses of “between” used across the various theme answers: astrologically, astronomically, geographically, alphabetically, chronologically, ordered by size… and whatever is going on with EYE/NOSE/EYE. i’m a fan of the british game show only connect, so the fact that these all relied on some sort of sequential ordering definitely had my “round 2” antennae up.

i’m a little curious (not that i’m complaining, mind you) why this ended up being a 21×21 puzzle instead of a 15x or 17x with, say, 4 or 5 theme answers, because a 21x is a lot more work to construct. VENTING was a perfectly nice final answer, but the puzzle could certainly have been approximately as satisfying with any number of 4-letter answers.

that’s all i’ve got this week. what’d you think?