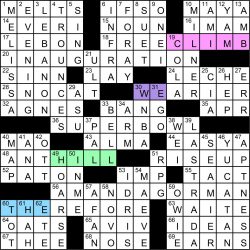 Hello there, everyone! Hope all of you are doing very well to begin the new week!

I am sure many people will have fond memories of the most recent INAUGURATION (20A: [2021 presidential event at which 56-Across recited a poem whose title is hidden in the ascending arrangements of circles]), and, somehow, even with the installation of the nation’s 46th president and the first woman to serve as vice president, poet AMANDA GORMAN was able to stand out as much as President Biden and Vice President Harris with her rousing poem (56A: [First-ever National Youth Poet Laureate of the United States…and the puzzle honoree]). Just one month later, she recited another amazing poem of hers before the start of the SUPER BOWL (36A: [February 2021 event at which 56-Across recited “Chorus of the Captains,” a tribute to pandemic heroes]). All this, and she did not turn 23 until last month!!

Also, to have MAYA in the puzzle to go along with the puzzle’s honoree and the visual of the words contained in the puzzle’s circles “climbing” is just another perfect touch to this particular grid (10A: [“On the Pulse of Morning” poet Angelou]). We have a whole lot of seven-letter chunkiness in the corners, but it turned out to be a couple of 1980s music stars, WAITE (63A: [“Missing You” singer John]) and LEBON, that stole the show for me and, also, had me thinking which Duran Duran song is my favorite (17A: [Duran Duran lead singer Simon]). I know Rio and Hungry Like the Wolf are what the band is best known for, but Is There Something I Should Know is a dark horse for me in terms of a favorite song from those Wild Boys. Currently losing track of all the movies that IDRIS has appeared in, so seeing the clue made me go, “He was in that film, too?” (53D: [“Thor” actor Elba]). Either way, he’s a wonderful talent, whether it be acting or DJing under his music name, Big Driis.

“Sports will make you smarter” moment of the day: HEP (26D: [Cool, back in the day]) – Before last month, former high school basketball coach Hep Cronin was mostly known as a local icon, winning more than 400 games as a high school coach in the Cincinnati area. Hep was thrown into the national spotlight during this March’s NCAA Tournament when his son, Mick Cronin, led the UCLA Bruins men’s basketball team to the Final Four, as it was chronicled that the son had not seen his 79-year-old father in over a year because of COVID. (Hep contracted the virus around Thanksgiving last year.) Because of the national attention, more people became aware of Hep’s eye on the baseball diamond as well, as he was a scout for the Atlanta baseball team for over 40 years and was instrumental in the team drafting future Hall of Famer Chipper Jones with the first pick of the 1990 Major League Baseball Draft. Here is father and son after UCLA’s First Four (play-in game) win during this year’s tournament against Michigan State. 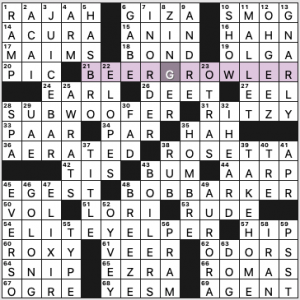 I filled in the lower right corner of the puzzle via all the clues except the 3-letter revealer, so my description of the theme was going to be “phrases that end with noisy things.” Not precisely! 63d. [Animal you might describe by the ends of 21-, 28-, 48- and 54-Across], DOG? Alrighty then. Dog sounds plus -ER appear at the ends of each themer:

Happy 420! In the event you have a case of the munchies, this puzzle is here for you. Well, sort of. It’s about food, anyway. 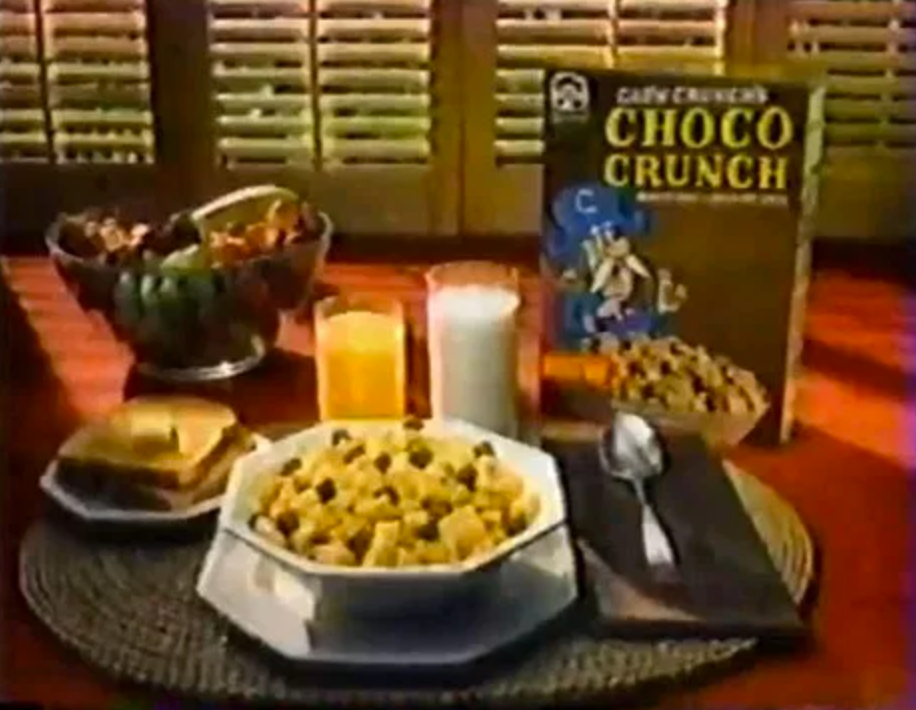 Remember those cereal commercials we used to see when we were kids? They always had the phrase, “Part of this nutritious breakfast,” and they’d have a shot of the bowl of cereal, a glass of milk, a glass of juice, some toast, and maybe some fruit? I always wondered if anyone ever ate all that at one breakfast. I sure didn’t. I mean, what kid has a glass of milk and a glass of juice at the same meal?

This puzzle does, though. It’s all part of this nutritious BREAKFAST SPREAD (39a, [Morning display, and a hint to the circled letters]). Each of the other theme answers is a common-ish phrase with a breakfast item spread out in circled letters. 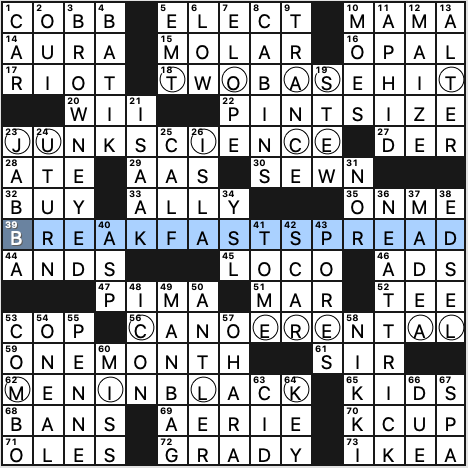 Going back to the revealer, when does one ever encounter a BREAKFAST SPREAD? It doesn’t quite sound idiomatic to my ear, but then, what do I know? The term got plenty of hits.

In the long fill, ONE MONTH feels arbitrary, but I do like the other entries: BROWN-EYED, PINT SIZE, NEAT TRICK, as well as MAN BAG and TRANCE. 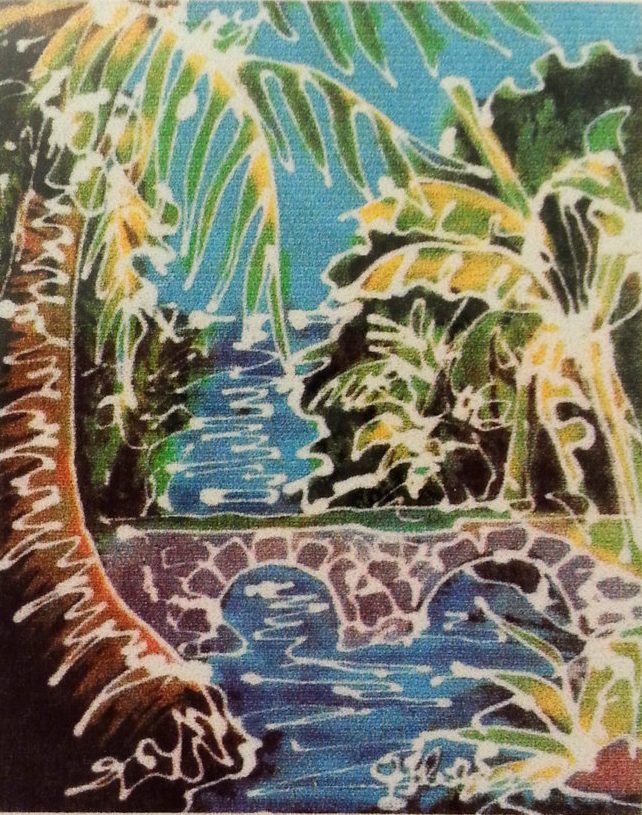 A Judey Flores BATIK of a bridge on Guam

So what do you say, does this puzzle pass the breakfast test? I say yes. 3.75 stars. 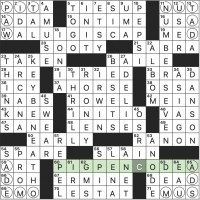 I had to go back and try to figure out what was going on here, but it makes sense now that I re-examine it. What are the circles for in the corners? A very interesting theme!

I will add a picture of Waluigi’s cap so you can see what is going on there. I don’t remember this symbol, but I don’t know Mario Bros. if it is past Super Mario 3. (I’m showing my age!) But the other symbols should be familiar to you quite easily, and these clues are clever. I think this is quite a creative idea; it might not fly at a mainstream crossword platform, but those are slowly fading in importance. There are TONS of indie crosswords out there! If you don’t get Matt Gritzmacher’s email list yet, what are you waiting for? But nice puzzle, Matt. 4.3 stars today. 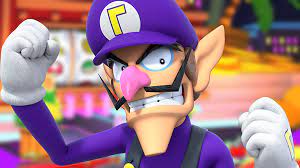 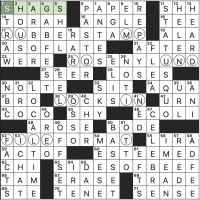 Food clues make me hungry. This puzzle has me starving!

See what I mean? The circles contain cuts of meat. I need to lay off meat like I did a few years ago, but around here that is not so easy. Possible, just not easy. Getting old stinks! But this was a fun puzzle to solve. Love the Golden Girls reference as well! 4.2 stars today.

THEME: ION is missing from common phrases, resulting in wackiness. 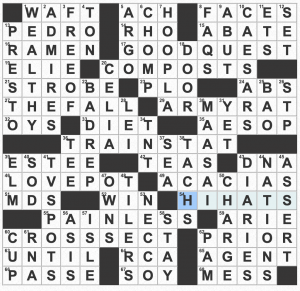 An impressive amount of theme in this one. And consistent in the sense that -ION is removed from the ends of each. I do like the entries that don’t change their vowel sounds once they are altered over the ones that do change. Those include GOOD QUEST, ARMY RAT, and CROSS SECT. LOVE POT is a great entry, but the O is not the long vowel sound that happens in LOVE POTION. Same goes for TRAIN STAT.

Stumbled quite a bit in the fill, and I grumbled a couple of times at things like DNA/RNA in the same puzzle, MAASAI being unfamiliar, ETS (as clued), OYS, BAO, TACHS, and a host of other crossword staples.

I object to the clue for HI–HATS. Besides it being an odd plural, you don’t “strike” it with your feet. As I’m familiar with it, the HI–HAT (not HATS) is made up of two cymbals controlled with a foot pedal (and it’s controlled with a singular foot… not feet). Typically, the drummer still “strikes” it with a drumstick. “Striking” it with both of your feet is a very odd visual for me. Maybe that’s how Animal from The Muppets plays it?

Good to see NECCO is back up and running after it went AWOL in 2018. Nothing like a bit of flavored chalk to make the day great.