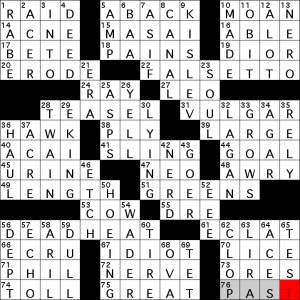 hello and welcome to episode #672 of matt gaffney’s weekly crossword contest, “The Purloined Letters”. for this week 3 puzzle, we have a guest constructor, dean silverberg, whose instructions tells us that the answer is a fictional detective. okay. what are the theme answers? there are no long answers in the grid, but there are a whole lot of answers (all in the acrosses) that do not match their answers:

other than the tricky one at 1-across, it’s straightforward in every case to figure out the correct answer. in each case, it differs from the answer in the grid by one letter—but not necessarily orthographically. (in fact, in no cases is it a one-letter orthographic change.) no, one letter has been purloined phonetically. well, usually one letter; in two cases, it’s a phonetic plural of a letter:

taking these purloined letters in order, and using a double letter whenever a plural is purloined, spells out RABBI SMALL. never heard of him? me neither, to tell you the truth. rabbi small is the creation of an author named harry kemelman, with whom i was likewise unfamiliar. the first book in the 12-book rabbi small series is called friday the rabbi slept late, a title which rings a very faint bell. (i admit i’m not an especially avid consumer of detective fiction.)

my unfamiliarity with the meta answer certainly wasn’t much of a hindrance when solving the meta, but it did dull the pleasure of the solve somewhat—instead of a final “aha” moment, it was more of a “is that a thing? let me google it” moment, with a correspondingly much smaller dopamine rush. i’m sure there are solvers out there who have read the rabbi small mysteries, though, and i envy them the extra satisfaction they must have gained from solving this meta. for my part, i enjoyed the repurposing of poe’s detective story title into a meta crossword title, and i was very much not expecting the phonetic part of the mechanism when i started solving it, so that was a nice surprise.

the crossword grid itself was a little unusual, with the lack of long answers pushing the word count up to a rather high 82. in addition, the high block count and relative lack of grid connectivity (all four corners are only joined to the main body of the grid via a single entry) made the solve somewhat disjointed. i don’t recognize the constructor’s name, so perhaps dean is a relatively inexperienced constructor, in which case i am probably just nitpicking—but i only bring it up because the unusual features of the grid really did affect my experience of solving it.

word i did not know in the fill: {Goods on the ocean floor, in legalese} LAGAN. i’m not sure when i’ll next have the opportunity to use this knowledge, but it was interesting to learn.

This entry was posted in Contests and tagged Dean Silverberg. Bookmark the permalink.