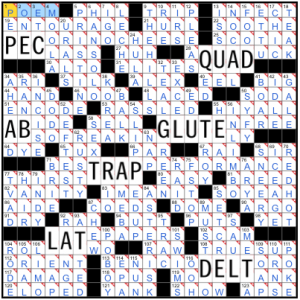 I solved this one untimed because after doing six ACPT puzzles on the clock today, I have ceased to care about speed. I know I’m not alone in that!

Theme is muscle stretching exercises, with the shorthand names of various muscles “stretched” to two squares. I solved via the .puz format, which used a pair of circled squares in lieu of stretched-out squares, so the solution grid is from the web version.

The theme entries are a PEC stretched between PECORINO CHEESE and P.E. CLASS, a QUAD in AQUADUCK (wildly unfamiliar to me!) and ELITE SQUAD, AB (just one! not the other ABs) in ABIDE and ABSOFREAKINGLUTELY, a GLUTE in GLUTEN-FREE and double-dipper ABSOFREAKINGLUTELY (excellent find!), a TRAPezius in BEST RAP PERFORMANCE and THIRST TRAP (if you don’t know that term, it’s just what the clue say: [Racy selfie posted for likes on social media, in modern lingo]), LAT in LATE PAPERS (which feels awfully green-paintish to me) and ROLL A TWO (ditto), and finally, a DELT in BENICIO DEL TORO and MODEL TANK (also green-painty).

THEME: Homophones with the “ORE” sound. 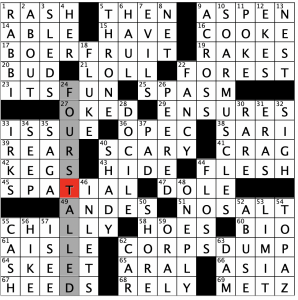 Not my finest moments, solving this. I hadn’t realized that the long down themers were actually themers (I don’t know why… A.M. grogginess?), and I thought that FOUR STALLED and SOAR MUSCLES were trying to be passed off as actual things. I wasn’t 100% on how to pronounce BOER (“Bore” I thought… but perhaps “Bear?”) so I couldn’t quite grasp the theme there since Bore Fruit and Bear Fruit would both work as base phrases.I had never heard of a Core Dump, so that last themer had me scratching my head as I’d forgotten the last name of [Chrissy of “This Is Us”] METZ and could not summon the word DAM for [One may make a lake].

So yea… I really screwed that up.

I didn’t quite chuckle at my mistakes, so in the long run the altered answers didn’t hit the funny bone. Everything just fine in the fill department. Nothing longer than 6 letters, and there often are some splashy downs in the Universal fill (see yesterday’s puzzle), which is probably why I thought FOUR STALLED was initially part of the fill.

It took me a while to figure out what was going on with this theme. The Oscars are tonight and the title tells me we’re in the world of film. I looked for director’s names in each theme answer – nope. I looked for letters to remove to create names – nope. In desperation, I scrolled through the list of clues to see if there was a revealer I’d missed, and that’s when Ir realized the theme answers are all sequential. I looked at the combination and finally saw the names “cut” by a black square. Phew. 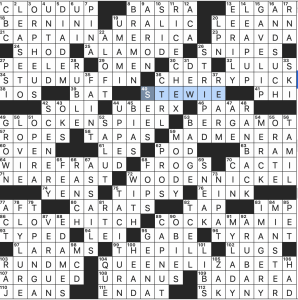 This is an amazing construction. Six sets of theme answers, each combining to make the name of an Oscar-nominated director, each pair precisely 20 letters long in combination so they span the grid once the intervening block is added. And for once it’s an amazing construction that was fun to solve with a satisfying “aha!” moment. There may have been one or two things in the fill that I’d usually quibble about and I don’t even remember them.

What I didn’t know before I did this puzzle: see above re: David FINCHER. I also didn’t know that STEWIE from “Family Guy” has a football-shaped head.

This puzzle is a repeat, as Evan is on vacation. It was new to me, however. I would’ve remembered solving this I’m sure, and Jenni is the team fiendster who originally wrote about it.

I’d write my own take, but there doesn’t seem much reason to as Jenni really nailed it the first time. I’m going to copy/paste her original post below and follow up with a couple things.

I am in New Haven at a conference and I can tell you that everything you’ve heard about New Haven pizza is true. Yum. There were also drinks. There was dessert. There was lively chatter. I tell you this to explain my slightly slow (and every so palindromic) time on this puzzle. “E-trade” is an internet-based investment company. You may have seen one of their ads during the Super Bowl. In Evan’s hands, “E-trade” is a double-barreled clue to the theme. Each theme answer is an odd phrase made up of two words that when flipped (or traded) turn into the name of a company with an app (an e-trade.) I like this theme. It’s accessible and interestingly layered all at the same time. Mmm. Layers. Cake. No, I already had cake….OK, I’m back. Here are the theme answers:

I enjoyed this whole puzzle. I enjoyed the dinner and the drinks and the dessert that preceded it and now I will enjoy my last night in the hotel bed before I head home.

What I didn’t know before I did this puzzle: that there was a movie called “Hot Fuzz” and that it was directed by EDGAR Wright.

It seems like Jenni took her time on this one as did I. The theme really helped me with the fill, which is the best sort of puzzle for me. In that sense, it was truly a puzzle. Lots of sussing out, inferring, and decoding of theme clues.

I’d be interested to know which clues were updated to brush any five-year-old dust off. Could it be that Evan made some clues longer since he has the space now? Like the fantastic clue to 27A [Retort that one might imagine C-3PO saying as a young droid on the playground] ARETOO. I dunno.

New for me PRESQUE Isle State Park. Needed every cross!

Thanks (again) for this one, Evan!

I, too, am puzzled out after participating in ACPT, but let’s see what we’ve got here.

The title says it all. The circled letters spell out types of desserts that are split between the ends of some entries and the beginnings of others. We have: 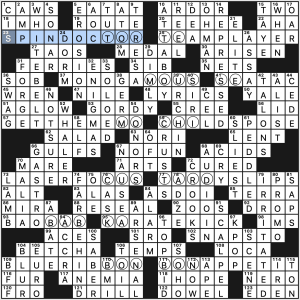 In the fill, I felt like I was being seen after Puzzle 5 of the ACPT with entries like OH MAN, IRRITATED, FAR BEHIND, and NOT SURE. But fun entries include WHITE BELT, ENIGMAS, and “ATTA BOY!” The rest of the fill is impressively clean. 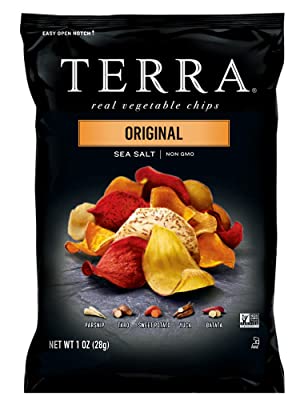 A lot of thought and time went into this grid, and it paid off. 3.8 stars.