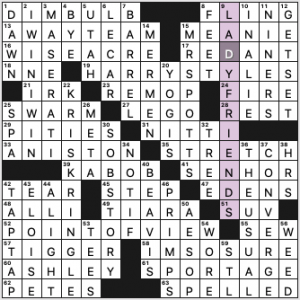 Hey, it’s ACPT weekend! The whole thing is online this year, and I’ve only done a handful of Monday puzzles over the last year so it can’t be said that I have trained. (I can race respectably on the Boswords themelesses, but alas, at ACPT your speed on themelesses only matters for the nine divisional finalists.) Maybe I’ll see you in one of the “rooms” tomorrow evening!

Fave fill: DIM BULB, AWAY TEAM, HARRY STYLES, POINT OF VIEW, “I WIN! I WIN!” (who will be saying that this Sunday afternoon??), MERMEN ([Some males in tales]), LADY FRIENDS, and THE USUAL. Oh! And MRS. POTTS, too.

4.2 stars from me. There was definitely a REMOP demerit! 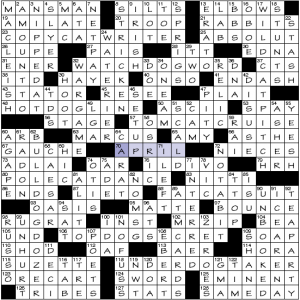 CATS and DOGS have dropped from some idiom cloud above into various phrases in the crossword, wackifying them.

And to seal the deal, the central across is 70a [Time for a shower?] APRIL, showing up in the proper month.

I’m reminded of the time that my then-s.o. and I dropped in to Cipriani off Grand Army Plaza, equally to seek shelter from the pouring rain as to slum with the rich and famous. We remarked to the barman and the maître d’ that it was raining cats and dogs, to which they were (or charmingly acted as if they were) nonplussed. Speculative discussion ensued, and one of them wondered why it was those particular animals. Why not “chickens and RABBITS?” (21a [Warren residents]), he asked, which we found (of course) hilarious. To this day, I have no idea if it was genuine or a routine, but it’s stuck with me all these years.

Good puzzle, despite a vague sense of a tad too many short initialisms, some awkward word constructions, and possibly an excess of proper names. 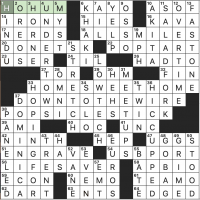 This was a smooth solve for me, albeit not quite quickly. Not a good sign since the online ACPT tournament puzzles start TODAY! But those will be a lot harder than this one, and I will have plenty of time to stare at a blank grid for Puzzle 5 this afternoon! I wonder if there will be less stress for that since I will be comfy in my own home after (hopefully!) a great night’s sleep in my own bed? Probably not! But I digress! Ed, keep these fun puzzles coming. Love the stack in the middle! (See below.) A joyous 4.5 stars from me.

That is all! Off to solve the ACPT puzzles! 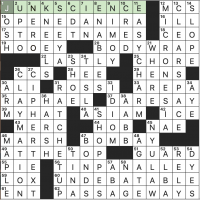 I am not ready for today’s ACPT! My times on these “Stumpers” have not been great at all recently. This one is no exception. Granted, I was solving this with loud music playing and with family milling around, but once I got to the “zone” of this puzzle, everything fell fairly decently. 1-Across, as usual, stumped me the worst. I finished out in that upper left corner. I LOVED the clues in this one; I am not a great clue writer. I think that is where a lot of the creativity of a constructor can shine, and I am not the most creative person. At least I don’t think so. But after getting stumped on this one, I did in the end enjoy it quite a lot. Good puzzle, Matthew! I am finally getting used to his style after several years! 4.6 stars from me.

THEME: Cuts of chicken are found in common phrases. 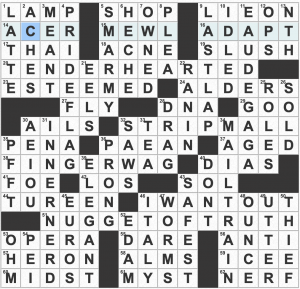 I mean, EAU DE GAGA for the win. Never knew that was a thing, but so cool to see it in a puzzle (and very inferable).

I was caught off-guard by the clue for TEA denoting the phrase “Spill the TEA” as being Black vernacular. It’s such a common phrase in these parts amongst all the cultures (in a public school setting anyway). It was a bit of a deeper dive to look into it, but sure enough, it seems to have started in Black culture, and more specifically, Black drag culture.

I wondered for quite a while how ASHES were [Workout reminders?], then I realized I made my recurring mistake where I mix up ACER and ASIC, so the second letter as entered was initially wrong.