CIRCLE BACK is the revealer (60a, [Return to a subject in conversation, and what this puzzle’s author did to make the examples stand out]). The other theme answers have a synonym for derrière in circles. 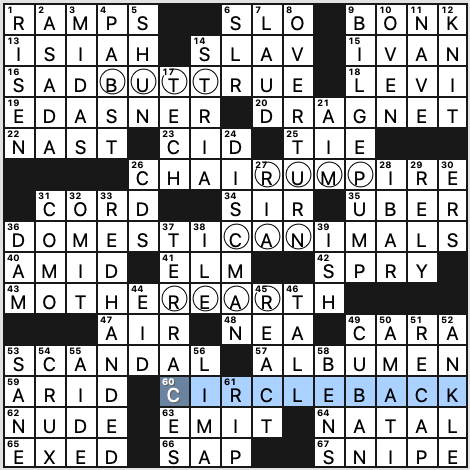 Yeah, no. As much as I partake in sophomoric humor, this doesn’t work for me. One’s “back” is different from one’s “backside,” or else I’ve had the meaning of “You scratch my back, I’ll scratch yours” wrong all these years.

Seriously, where do people call their butts their “back”? The “back” is a very specific part of your body from your hips up to your shoulders.

Ok, I’ll grant you Sir Mix-A-Lot’s 1992 “Baby Got Back”, but that was nearly 20 years ago, and as far as I know, that slang didn’t take. And besides, as used, it was sexist and objectifying. Hardly what you’d want to build a puzzle around.

So the revealer is a non-starter even though the theme answers are all lively and fun.

In the fill, BILGE PUMP is fun as is RED-HANDED, DRAGNET, ALBUMEN, and DISCMAN (though, weirdly, it’s not cross-referenced with the nearby CDS).

It’s a nicely constructed grid, but the theme doesn’t work for me at all. 2.8 stars. 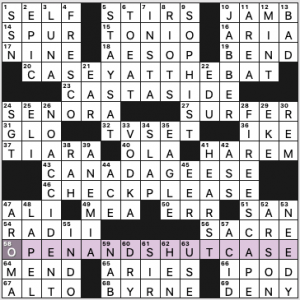 The theme layout is unusual, forcing left/right symmetry rather than the usual rotational. During Monday night’s interview with Boswords constructor Brooke Husic, Brooke talked about her choice of diagonal symmetry (across the NE-to-SW axis, not rotational symmetry) for her finals puzzle. Brooke likes to use such a layout because it allows more 14s and 12s, which are tough to accommodate when rotational symmetry is used. It boggles the mind that she’s only been constructing for a year! (If you like tough themelesses, check out Brooke’s blog o’ crosswords.) Hal’s theme set here is 13/9/11/11/15, which rules out rotational symmetry.

How come I could crack the 3-minute mark on this Wednesday puzzle but not on either of the easy 15×15 puzzles at ACPT last weekend? Hmph. 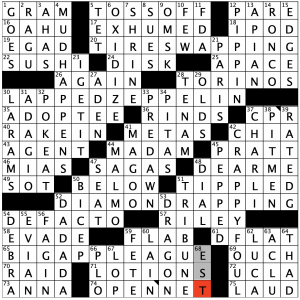 It took me until typing this up to figure out exactly what was going on.  With “Program Placement” as a title, I knew something was up with the “PP” in each entry, but then I realized it was an “APP” in each entry.  As in a program.  Dropping that from each phrase above gives more normal phrases like TIRE SWING, LED ZEPPELIN, DIAMOND RING, BIG LEAGUE, MUD HENS, and CRY FOUL.

Wow, I am not ready for the IPOD to be clued as a “retro Apple product” just yet 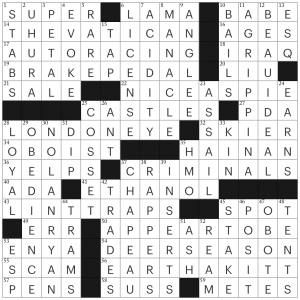 First of all, congratulations to constructor Patrick Berry on receiving the Merl Reagle Memorial Award for Lifetime Achievement in Crossword Construction at the ACPT this weekend. One highlight of the competition, for me, was his acceptance speech, the entirety of which was “Really I’m no speech giver at all. I just wanted to say thank you very much, I’m very honored.” Patrick Berry really knows how to pick his words!

The words he picked for today’s long entries were also classic and precisely woven together; we have: THE VATICAN / AUTO-RACING / BRAKE PEDAL / APPEAR TO BE / DEER SEASON / EARTHA KITT / OBEDIENCE / NOLAN RYAN / AGRIPPINA / BEAU IDEAL / NICE AS PIE / LINT TRAPS. While none of these jump out at me as particularly flashy or exciting, they are all NICE AS PIE. AGRIPPINA was new to me, as was BEAU IDEAL, and I don’t think anyone actually says NICE AS PIE, so I struggled a bit in the NE, but I got there eventually. Also complicating that section for me were LAMA [Shangri-La resident, in James Hilton’s “Lost Horizon”], ANG LEE clued for a movie I haven’t seen [“Lust, Caution” director], HAINAN, and BABE [___ Didrikson Zaharias (two-time Olympic gold medallist in track and ten-time major winner in golf)]. The rest of the grid was easy AS PIE, but that section really took some doing.

Overall, this was a relatively quick solve all over *except* the NE, which presented a fun challenge. Plenty of stars from me! 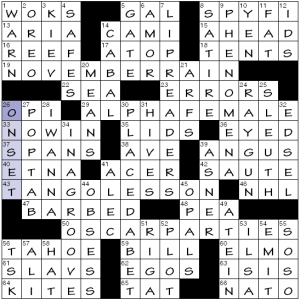 The first words of these phrases are from the NATO phonetic alphabet, and also, in order,  spell out NATO using that same system.

There’s no revealer, and I leaned on the title to figure out the theme. Probably would have been able to see it without that hint, but it definitely hastened the process. 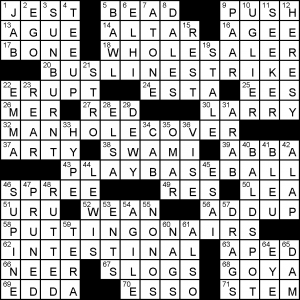 My reaction while placing BUSLINESTRIKE and PLAYBASEBALL was that they seemed kind of arbitrary, unlike MANHOLECOVER. As it happens, this theme type, even in its regular form, is notorious for resulting in these sorts of “green paint” answers. Usually, we get two part answers where both parts can have the same word added. In this case, AIR can be added to all 3 parts: AIR(BUS/LINE/STRIKE); AIR(MAN/HOLE/COVER), AIR(PLAY/BASE/BALL). It’s the kind of puzzle that’s very tricky to make, but for not all that much solving pay-out.

The rest of the puzzle was rather a blur. Not a lot stood out, for better or worse.