Our theme is PUT A RING ON IT (23d, [Lock in a spouse, and what the first letters of six Down answers do visually]). (Note that the phrase “lock in” means “get a commitment from,” not “imprison.”) The other theme answers, all in the Down direction, have an O as the first letter. This is to be read as “RING” when reading the answers. 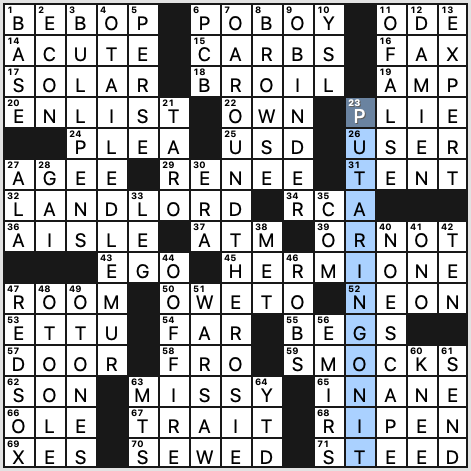 I like it. The revealer makes sense, the “rings” are “on” the theme answers, and the title is a clever play on words.

But why o why are there extraneous O-words in the Down direction that aren’t part of the theme. I’m looking at “RING-NO” and “RING-TOOLE” (41d ONO and 48d O’TOOLE). This was distracting at worst and inelegant at best. I realize now that these aren’t symmetrically placed like the others, but still, by the lower half of the grid, the solver is looking for O’s in the top squares and is expecting them to be “rings.”

Other than that, there’s a lot of other fill to like: BULLPENS, NO ESCAPE (the Owen Wilson film), LANDLORD, HERMIONE (nice to see her get some airtime), RED SOX, WARSAW, and SMOCKS. I’ve also taken a shine to those first two entries: BEBOP PO’BOY. Fun to say and almost the reverse of the anime Cowboy Bebop.

Nice theme and fill, I just wish the extraneous O-words had been rooted out. 3.75 stars.

I was pretty sure this was going to have something to do with on/off switches before I started solving. I was right. It still took me a little while to figure out exactly how it worked. It’s a two-way rebus – ON in one direction, OFF in the other, with an extra element that makes it really elegant. I’m using Peter’s grid, which is clearer than mine. 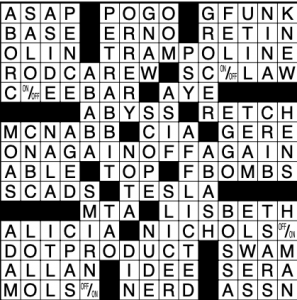 That last one blows my mind, and I presume it was the seed entry for the whole puzzle. This is amazing – four pairs of theme entries that can be clued the same way and cross at ON/OFF. They’re all solid entries – nothing iffy, nothing forced. A tour de force of construction with a good “aha!” moment. I’m in awe, and I had a lot of fun solving it.

What I didn’t know before I did this puzzle: that EGGO has a Chocolatey Chip variety. I’m not even tempted. 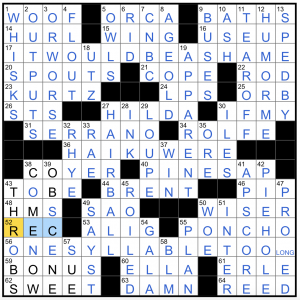 Oh man, y’all, I am not a fan of quip crosswords, and it turns out I’m even less of a fan when you apply specific poetic meter rules to them:

There’s just not enough of a toehold on some of these longer entries to figure out what’s going on, and there’s something that kills the joke for me of the final line of the quip actually being too long instead of leaving you hanging at “one syllable too”, which wouldn’t work here because you need a 15 letter answer for the final clue.  The one rebus square for LONG also sticks out to me, though it’s nice that PRO[LONG]ED (47D, “Extended the duration of”) gets use of the square as well.

Anyways, this ended up feeling like a slog to me, since the very specific wording of the lines meant that getting the lower left corner’s entries (RHYE? COME NOW?) was trickier as well.

In honor of today’s haiku theme, here’s some Japanese ambient and my favorite haiku:

Haiku are easy
but they don’t always make sense.
Refrigerator.

A puzzle you will definitely reflect on.

THEME: Phrases / Words that can be read in a mirror due the symmetric nature of their letters and the backwards placement in the grid. 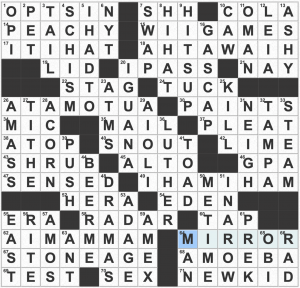 This is pretty cool, despite the fact that I stared at the grid for quite a bit before actually checking it out in a mirror (of sorts). I used my phone in selfie mode to look at it, but when you actually take a picture (or even screen capture), it “unmirrors.” Otherwise I’d share the picture. I suppose I could take my laptop in to the bathroom here at the high school where I teach and snap a pic there, but that’s way too much explaining to do on the very likely chance that someone inadvertently witnesses that situation.

I really didn’t catch on to the fact that the answers are simply backwards and are composed of symmetrical letters, so the theme stayed a mystery for me until post-solve. That’s not a bad thing. It has enough of a curious gimmick to keep the suspense high, and the AHA is satisfying. I just wonder how many solvers are going to actually see how the puzzle looks in the mirror, especially those solving on a desktop computer/phone/laptop/ipad.

At first I assumed WII GAMES was part of the theme because it’s the same length and doesn’t solidly strike me as a stand-alone phrase. I think the themers would pop better (especially in the mirror) if they weren’t abutting other entries of the same length.

Plenty to like in fill: BEER ME, NEW KID, I HAD TO!

Chuckled at clue for EAST with [Indian-to-Ohio direction]. I’m programmed to assume abbreviations like SSE, NNE, etc. when I see clues asking me to mentally navigate the country (I never do btw, I always just guess).

How did I never notice that HERA is an anagram of Rhea?!

Also, I think I HAM! I HAM! sounds like a swell name for a children’s book about piglets. 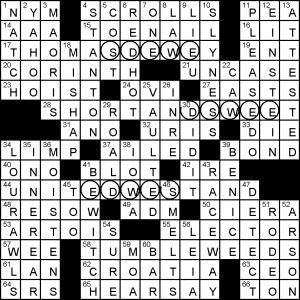 I have said this before but these “scrambled word hidden across parts of a phrase” puzzles are feeling a bit overdone lately. Today’s puzzle is by the book: cute revealer with anagram indicator – TUMBLE:WEEDS. The entries are well chosen too: THOMA(SDEWE)Y, SHORTAN(DSWEE)T, and UNIT(EDWES)TAND.

Bits and bobs:
[Yanks’ NL counterparts, on scoreboards], NYM. Don’t remember seeing that abbreviated thusly. (Mets)
[Cutlass model], CIERA. Not to be confused with R&B singer CIARA, which I usually do.
[Minute], WEE. We had a cat for sterilisation called Wee-wee today?
[Google rival], YAHOO. Yahoo search is just bing now and it’s long since been bought out and its brand eroded.
[“No arguing”], BENICE followed by [Cast a spell on], BEWITCH. Don’t be nice, be witch!

I always end up writing these in a rush. I apologize if I’m not given Brendan his due. It’s almost dinner time around here…

Each theme answer has an OY sound replacing a long U sound. Wackiness results. 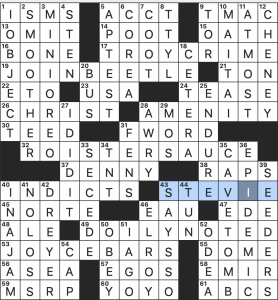 What I didn’t know before I did this puzzle: that Chick COREA won two posthumous Grammys earlier this year.