This seems like a pretty thin theme for a Fireball puzzle. It’s more like a Tuesday NYT than a Thursday, and as my time suggests, there wasn’t anything in the fill to make it more challenging. I figured it out with the first theme answer (the circles made it hard to miss) and kept waiting for something more….but no. There are three theme answers and a revealer. 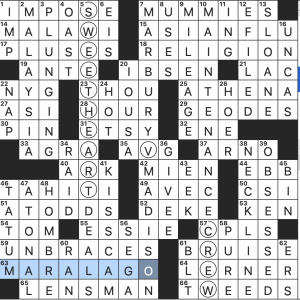 The revealer (so to speak): 3d [With 38-Down, the theme of this puzzle] is PLUNGING NECKLINE. SWEETHEART neckline, V-neck, and CREW neck. The necklines move downward across the grid, and so do the two revealers. It’s solid and consistent and all the other things I routinely praise in Monday NYT themes, and that’s all well and good. I want more from the Fireball, and Peter usually delivers. Not this time (unless I’m missing something. Am I missing something?)

What I didn’t know before I did this puzzle: that anyone would put GIVEE in a puzzle. I also did not know that “Without a Trace” came on after CSI, or that MAR–A–LAGO is a National Historic Landmark. This designation predates its current ownership. 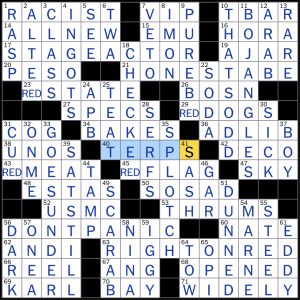 Today’s puzzle from Ed Sessa has more going on under the surface than may initially appear to be the case:

these are all well and good, but the revealer shows that the theme is actually RIGHT ON RED (63A, “Traffic go-ahead that should be followed four times in this puzzle”).  Looking at the downs that intersect the [RED] squeares, those entries can’t work without some twisting to the right when they hit [RED]:

I thought this was cute, even if I caught on to what was going on early and slashed through the majority of the grid.

other fill of note: A shout-out to Ibram X. Kendi’s “How to be an Anti-RACIST” at 1A, STAGE ACTOR, HONEST ABE, DON’T PANIC, KARL Lagerfeld, INGOTS, and SPLOTCH

The central revealer is PYRAMID SCHEME (33a, [Financial fraud, and a hint to the circled letters]). The circled letters in the four corners of the grid are shaped like tiny pyramids and comprise words that are synonyms of “scheme.” 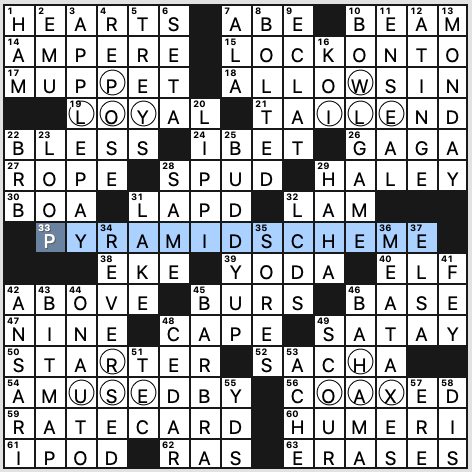 Those synonyms are PLOY, WILE, RUSE, and HOAX.

Cute, but once you figure that out, there’s not a lot of enjoyment to be squeezed out of the theme. Grokking the theme did help me in the lower half of the grid—which is the main job of a theme—but I had to look to the fill for further amusement.

I found some in APPLE PAY, BOWL GAME, BUDDY UP, LOCK ONTO, MUPPET, and Aziz ANSARI. I’d never heard of MEAT AXES as another term for cleavers, but that was fun to learn.

What was less fun was RATE CARD [Ad rep’s offering] which feels like something only people in the business would know, and I’d never heard of the painter LIPPI. Also, that NE corner is saddled with some crusty stuff like ECLAT, ENSEAL, and ATINGE. Blurgh.

Scooter the MUPPET and Elizabeth Banks

Lots of ups and downs in this grid, which is somewhat appropriate for a pyramid-based theme. 3.5 stars.

Great title! It also serves as the revealer.

THEME: Words that can follow “Big” are at the “heart” of common phrases. 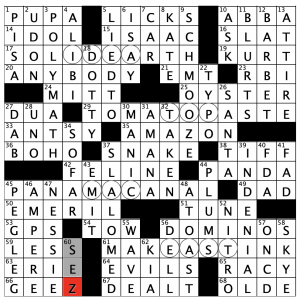 This is pretty nifty. At first, I thought it was an “unscramble-the-hidden-word” theme since I entered SOLID GROUND and saw IDGR circled. I anagrammed that to GRID and spent a couple seconds trying to think of revealers that would hint at mixing those letters.

Then I realized I misspelled GROUND in order to get it to fit. When I corrected it and saw IDEA the theme was apparent.

Other good stuff in this grid:

I can’t not include my recurring complaint that this puzzle is better served with circles, and I find it odd that Universal is not addressing its inability to include circles on its widely available platforms more quickly (I was told that a fix was coming, but that was over a year ago). For me, it’s a completely different solve experience with circles. Here is a screenshot of an example:

Without reading the clue, I was able to enter MAC off of the C in MANIC because the theme, the fill, and the circles were working synergistically. I would not be able to do that with the “workaround” where Universal asks its solvers to count letters and mentally circle them in their minds-eyes.

If Universal is confident with the workaround solution, then why bother to offer a different solve experience by including a grid with circled letters on this site?

Anyway, puzzle itself was a lot of fun.

All the theme entries are well-know phrases that have been punnily reworked to include extraterrestrial references. 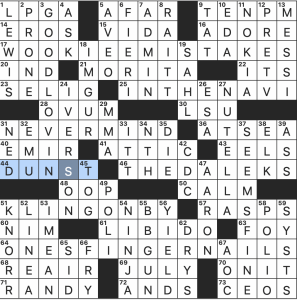 I love a Klingon as much as the next casual Trekker, but that last one doesn’t sit right with me. Hanging on by one’s fingernails, sure. Clinging? Not so much. The Google Ngram viewer agrees with me. I can’t say anything more about this than “all the punnified answers are amusing.” When someone tells me what the Doctor Who reference is based on, I’ll know what I think of it overall.

What I didn’t know before I did this puzzle: never heard of the Coldplay album “Viva la Vida or Death and All His Friends.” Also did not know that Kirsten DUNST appeared in “On Becoming a God in Central Florida,” which has to be one of the great TV series titles of all time. Looks like it’s on Showtime, which we don’t have, so I’ll have to figure out if it’s worth tracking down. Opinions? 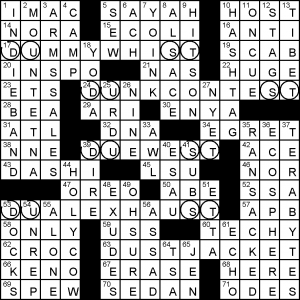 Another day with a fairly basic theme concept, but with interesting answers keeping it from feeling stale. The revealer is DUSTJACKET, and as seen in the added circles, four two part answers are flanked by DU/ST. I liked all the entries – DUMMYWHIST, DUNKCONTEST, DUALEXHAUST plus DUEWEST as a clever way to include a fourth entry without weakening the grid design.