This puzzle lost me at HUNH (13a, [“Say wha?”]), especially as it crosses groan-worthy INTONER and proper name SHERE. This was the last entry to go in for me, so things were going fine up to that point. 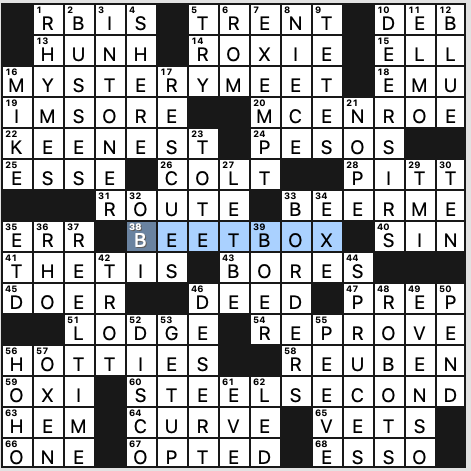 Hit and miss with the theme, but another point against it is the puzzle title is way too broad. There’s got to be a better way to signal going from EA to EE. And the inclusion of similar-looking-but-not-actually-thematic BEER ME strikes me as inelegant.

Okay, now I’m noticing there are no A’s in the grid at all. So there’s that. But really, how many people will notice that? Kudos to you if you did. So maybe the title isn’t that bad, but it is confusing. The long theme answers make you think the theme is one thing, when that’s only part of the picture.

Aside from my gripes at the top of the post, there’s good fill here: HOTTIES, MCENROE, REUBEN, and “I’M SORE” especially when you realize there are no A’s involved. But there’s also ESSO and ESSE and TETES.

The puzzle definitely has some things going for it, but the theme is misleading, and, well, HUNH. 3.25 stars. 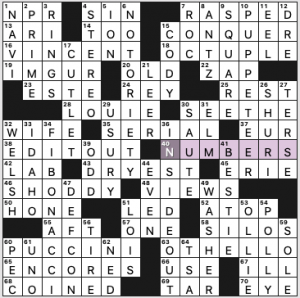 Okay, let’s take stock of this theme. I didn’t put it all together while solving the puzzle. We start with 40a. [This puzzle’s theme], NUMBERS, and then it spins out from there:

The theme entries aren’t laid out symmetrically—rather, they’re placed where they can work out with exactly two relevant numbers in the answer word’s squares. (And in fact, each theme entry has a different letter count: 3, 4, 5, 6, 7, 9. Where is the 8? Someone has absconded with it.) The trio of MIT constructors used technowizardry to get the grid to work out. I don’t understand that angle myself. 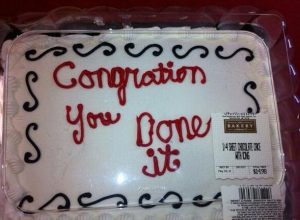 Congration, You Done it cake 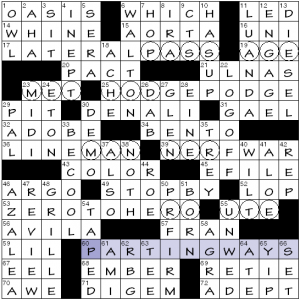 Before encountering the revealer (and not really having paid attention to the circles) I wondered if the rhyming qualities of 25- and 53-across were significant. 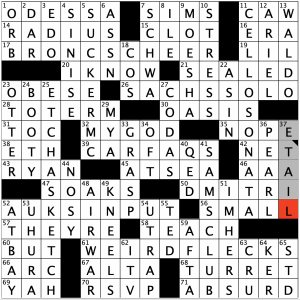 This week’s AVCX is from Francis Heaney, and the title “X Out” does a pretty good job of explaining what’s going on with the theme: 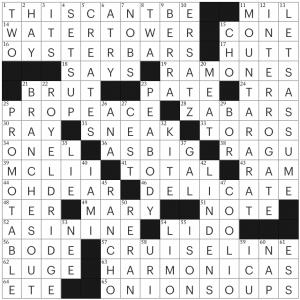 This was a fun solve, although some of the fun-ness was definitely countered by a good amount of fill I could live without. But the long stuff and wide open corners are pretty shiny today, and overall I think this puzzle was a success!

The long entries today are stacks of 10s and 11s in each corner. We have, clockwise: THIS CAN’T BE / WATER TOWER / OYSTER BARS / MOUNT ARARAT / INTERROGATE / LETS ASSUME / CRUISE LINE / HARMONICAS / ONION SOUPS / PROMOTABLE / BRANCHES OUT / ROY ELDRIDGE. All really solid! I didn’t know ROY ELDRIDGE or ONE L, which crosses it, so I struggled in the SW, having parsed ROY’s name as ROYaL (something). I also didn’t know I AM I Said, so that whole corner presented some challenges. I looooved the colloquial translation of [Impossible!] as the clue for THIS CAN’T BE, and LET’S ASSUME and BRANCHES OUT are also very fun.

Overall, this was a fun puzzle with a lot of iffy fill but a very impressive grid structure. Many stars from me! 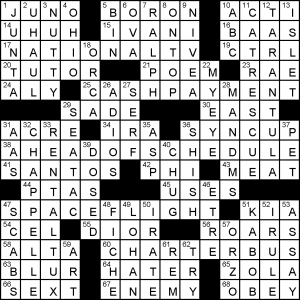 The puzzle theme was a little basic today. AHEADOFSCHEDULE is the revealer and the four ending words TV, PAYMENT, FLIGHT and BUS can be completed by SCHEDULE. There isn’t a lot of room for playfulness in meaning between theme answer and literal answer here.

That said the rest of the puzzle was cleverly designed to allow for several other interesting answers. Of note are both top-right and bottom-left pairs. The top features CATRESCUE which feels fresh (even though I hate the marketing aspect of shelters vs. rescues…) and TARANTULA; the bottom pair are CHAPPELLE in a RENTALTUX. Also bonus points for including both SHISH and KABOB. If you’re going to have SHISH…