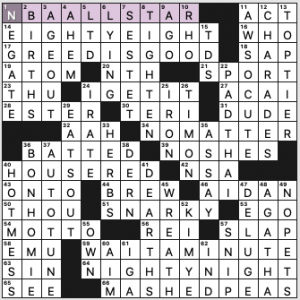 A smooth 72-worder with lots of spiffy fill, such as NBA ALL-STAR, movie quote “GREED IS GOOD,” “WAIT A MINUTE,” “NIGHTY-NIGHT,” BONHOMIE, and CHARADES.

As with the Friday NYT, there’s a sort of mini-theme here: NIGHTY-NIGHT and EIGHTY-EIGHT differ only by their initial letters. Neat! We might have expected the number to have a piano keys clue, but no, it’s scientific trivia: 14a. [Number of days it takes Mercury to orbit the sun].

4.25 stars from me. Enjoy your Saturday! 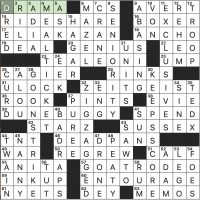 My friend Debbie Ellerin has this Saturday’s LAT challenge puzzle. Not too difficult, but that is a complement to the constructor, since there is almost nothing obscure in this grid. What is obscure is certainly somewhat subjective from one person to the next, but I personally found nothing that I didn’t know. Am I that cultured and well-read? Certainly not! But I am getting old, so there’s that … ! A very fun puzzle here, and I found quite a lot of joy in solving this one. Kudos to Debbie! 4.6 stars from me. 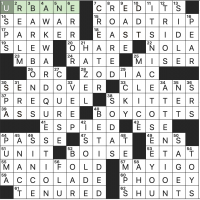 The “Stumpers” are still slightly tougher recently, albeit not quite as tough as before. I am thinking this was a conscious decision, otherwise I am just having a rough month! I am getting on Matthew Sewell’s wavelength, but this still had enough vagueness in it to give me fits. It was tough to find a toehold in this one, but the puzzle was still fun. I haven’t been angry at one of these in quite a while! Keep the great puzzles coming, Matthew! 4.6 stars from me. 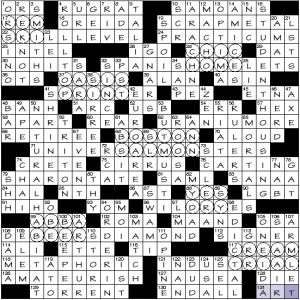 So this is a random kind of theme, ushered into existence purely on the basis of the title phrase, which, although not coined by Paul and Linda McCartney in the early ’70s, certainly received an uptick in notoriety around then.

For each thematic pair, the circled squares in the top row comprise a musical band’s name—as a full entry, though clued in a different context—which sits atop a word that can be followed by ‘run’ to form a familiar phrase. This second word appears hidden in a longer entry. Furthermore, the two paired circled words are of the same length. It plays out much more smoothly than this tortured explanation.

It’s quite a concept, and quite a feat of construction. I can certainly forgive the bit-of-a-stretch WILD RYES, but look less kindly on the editorial choices to include a cross-reference to a non-theme entry (am I the only one who has a peeve about this? on the other hand, how else to clue SIRREE without duplicating the entry YES?) and to (conspiratorially?) nod to the theme by dabbling with a band’s name in the final clue. Also not thrilled with mentioning branded diamonds, especially from such an unethical company, but what’re ya gonna do?

*Possibly the worst clue/answer combo I’ve seen in a respectable crossword; not only does it truck heavily in awful abbrevs. it’s a cross-reference to boot!

Despite everything, this crossword still comes out a winner.

Here’s trash-rockers (not as bad as it sounds!) the New Duncan Imperials from their thematic EP “We’re in a Band” with their rendition of BOSTON’s autobiographical “Rock and Roll Band” (the record of course also features “Band on the Run“):

THEME: Synonyms for “promise” are split in theme answers. 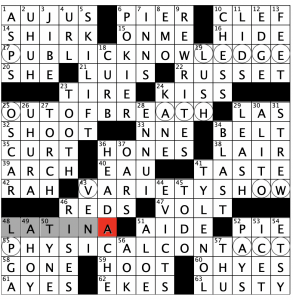 Solid, consistent theme, though somewhat familiar. Perfect fare for Universal, which will go out on a limb and publish some more daring themes, but will always remain accessible to all solvers. A very standard solve for me. Nothing very flashy. I do like the consistency of having just the first letter of each entry being part of the broken promise.

Filled fine, but not much room for fresh, longer entries. ENNUI right at the center of the grid had me grimace, but what else can you do there with two themers having to connect E???I   ?

This is the third blog post in a row for me where Universal is better served with circled letters. Of the puzzles published this week by Universal, over 50% included circled letters when the solver downloads the puzzle from this site. Solvers who publish on paper or on the web app do not get circles. They get instructions where they have to count letters and circle them mentally. I don’t understand why Universal does this. And so frequently. It’s the only puzzle that I’m aware of that intentionally offers two different solving experiences (one available on this site, and one for the masses in print / online).

Per its website, the Universal  puzzle “…sets the standard for all daily crosswords.” How come more aren’t offering two different versions of the same puzzle?

I also just found out that some publications who print the Universal in syndication omit titles and/or bylines. Can’t imagine it’s hard to include those, especially when titles (like the one here) often serve as revealers. Why is that ok?

Anyway, I think it was easy enough to see the theme in this puzzle without the circles, so it doesn’t suffer as badly as some others have.